Since I’m on this whole Chicago politicking bend, might as well tell the whole story.

Most people who know about Chicago politics, or who have lived here for some period (or seen the “How Weather Changed History” episode where they covered it) know about how Chicago elected their first female as mayor by the name of Jane Byrne in 1979.  Beginning New Years’ Eve 1978 snow began to fall and so did the temperatures.  It was similar to the past December of 2008 where every

two or three days it was snowing.  The difference was that it was snowier and colder than this past month, and the trend had set up for the entire month of January and February.

What happened was something that most black South Siders and West Siders are familiar with–the side streets weren’t plowed.  Honestly, not getting side streets plowed isn’t the end of the world, especially when being plowed means that your car will get plowed over if you’re parked on the side of the street that the plow.  But, like when Chicago received about 22 inches of snow over January 1-2, 1999, we needed our street plowed.

Ultimately what happened in January and February of 1979 was that the streets weren’t plowed, and the bitter cold turned the snow to ice, and people couldn’t get to work.  Those that made it out of their house, in the black neighborhoods, and made it to the El only stood on crowded platforms due to tracks freezing and an executive order to bypass certain stops.  Additionally, because the alleys hadn’t been plowed as well, the garbage wasn’t being picked up.  Byrne capitalized on this against

Now nothing like that happened this last month, in fact what I’m about to say only happened after a very small, 1 to 1.5 incher earlier this week.

I was coming from a friend’s house earlier this week at about 3 am.  I was driving down Cottage Grove last night and the entire street was covered in snow.  It was somewhere between an inch or two, definitely not more, but I was confused.  Why was it that a very main thoroughfare of the city, with a bus route that has been in operation since my mother was born was completely covered in snow.

So, I get to 55th street and turn right headed east and it to was covered in snow, then I came to Woodlawn Ave., and turned left only to discovered a street that had evidence of salt having been dropped earlier.  When I got to the light on 53rd street by Kimbark Plaza, I was THROUGH–53rd street, a non bus route was COMPLETELY salted.  And then as I proceeded down Woodlawn, and crossed 51st street I realised that it was COMPLETELY salted as well.  And not some random salt, but that the entire street was wet and had a surface temperature above freezing and then—-

I friggin’ forgot–President-elect Barack Obama’s house was two blocks away from that intersection.

Okay, so one of the perks of living four blocks from the president-elect was getting GREAT snow service this year.  We live across from a park and it’s wide and flat enough that if it happens to be windy, our street gets completely blown over.  The cars parked on the west side of the street, if it’s enough snow become buried and act as a snow fence of sorts for the street.  Be that as it may, even if our street is plowed and salted, it has a propensity of being blown under.  So, in the midst of this last snows of December, it was nice to count and see snow plows in our neighborhoods–I counted three in one 48 hour period, where some years I was hard pressed to count one.

It has always been a hallmark of mayor’s since Bilandic to spend beaucoup money on snow removal and salt.  But in a year when city budgets across the country have had to cut many community programs and institute furloughs and actually laying off workers, snow removal would take a backseat–especially when no one can predict the weather.  It’s always the hope that it’s less snow and ice than predicted.  However, the city (of course in every other city this would mean the mayor by default, but of course Hizzoner can do no wrong) made a statement in October that certain streets wouldn’t be plowed this winter due to cuts in the budget.  Seeing as how most old timers in Chicago always mention the Blizzard or ’67 and the Blizzard ’79 as watershed moments in Chicago snow removal–well, lack thereof–to hear a Chicago mayor utter the words that “some arterial streets may not get plowed as quickly” or that “some side streets may not get plowed at all” was not a prudent move.  The fact that no one, but me, seems to remember the Blizzard of ’99–a bona fide meteorological blizzard–is a testament to a city that works.

So when the side streets that may have not gotten plowed anyway, simply because they were in the colored communities–or around the neighborhood of the President-elect–ended up not plowed, due to the mayors words at the press conference, the issue of prejudicial or preferential treatment arises yet again. 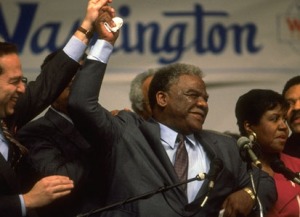 It’s been 25 years, a quarter of a century since Harold Washington beat a tight lipped Jane Byrne winning the Democratic primary because for once, the white vote was split between Byrne and then Cook County States’ Attorney Richard M. Daley (that’s a first, usually it’s like 50 million black folks running against one white person) and triumphantly declared in his inauguration speech that it will “not be business as usual.”  But that was evident already.

Chicago, as most people know was the city where Richard J. Daley erected the infamous Robert Taylor and Stateway along side of the Dan Ryan expressway, and Cabrini-Green Homes that became the icon of city high rise projects in the country.  It was also “the Pharoah” who issued the now infamous “shoot to kill” order during the 1968 Democratic National Convention held in Chicago.  This was also the city where Martin Luther King made NO progress and was mobbed in Marquette Park on Chicago’s Southwest side near 67th and Kedzie.  This was also the city where citizens spray painted “nigger” on a church door where Harold Washington was campainging, and he faced placards and youth protesting by saying “Nigger, go home!” with Republican opponent Bernie Epton ran on the campaign of “Epton for mayor…before it’s too late.”  In a city that had just four years earlier voted 82% Democratic, with the city approximately 40% black and 40% white, 81% of whites supported Bernie Epton who came only within 40,000 votes out of 1.2 million votes cast of winning the election.

This is the history from which we come.

(Let the record show that the four years and some change were the years that most of the other midwestern cities such as Gary, Ind., Detroit, Mich., Cleveland, Oh., Toledo, Oh., and other midwestern cities struggling to make the transition out of being the Rust Belt–Washington stabilized this city and took it to an upswing, Daley has merely capitalized on it.)

It’s not a far stretch that from the higher ups that Streets and Sanitation department get certain directives to plow certain streets at certain times.  I’d question just how many residents of the South Side (except Hyde Park) and most certainly the West Side recall seeing a salt truck, moreover with a salt truck with their plow down, or dropping salt.  I’d bet not a lot.

I’m quite slow to name something racist, particularly in the face of calling it simply prejudiced, but when preference and prejudices are demarcated by racial lines, such as snow removal–it’s racist and it has to stop.  I think this is indicative of the inherent racism that happens in our everyday lives.  Let us remember, those who are privileged aren’t aware of their privilege until it has been removed.

Okay, Obama got elected, wonderful!  “How ’bout a round of applause, a standing ovation” for the first president with roots in an urban center we’ve had since Kennedy.  But he has NOTHING to do with getting my streets plowed.  I’ve read many other commenters on other blogs try and drive this point home: real political change happens on a local level.  For Chicagoans it comes in the election of our Cook County board members, DA MAYOR, and aldermen and alderwomen.

So to all my readers, pay attention to your local election schedules, and go out and vote for them.

In other related snow news–for parties interested in the mundane banality of my life, I love snow and I love the cold weather.  But, evidence of being down south for the majority of the last six and half years reared it’s head when on December 21st, four days before Christmas, my “cruise ship” or “ship of Zion” as my friends at school call my boat of a car, got royally stuck as I gunned it for a parking spot raising the car up high enough, stuck on ice and snow that at -4 degree weather and -20s windchill, it took an hour for me to get my car unstuck from a parking spot outside of my house.

Below are pics of the infamous parking spot.

Now, I park in the plowed spot in the parking lot in the back.

Do you have any snow stories from where you are?  In your own municipality have you noticed preferential treatment based on race–be it in your favor or against it?

As another side, I actually saw some Harold Washington parakeets outside my window early this morning when I woke up–go figure.

8 thoughts on “Is it Prejudiced, Preferential Treatment or Racism: Snow Removal in Chicago (or lack thereof)”