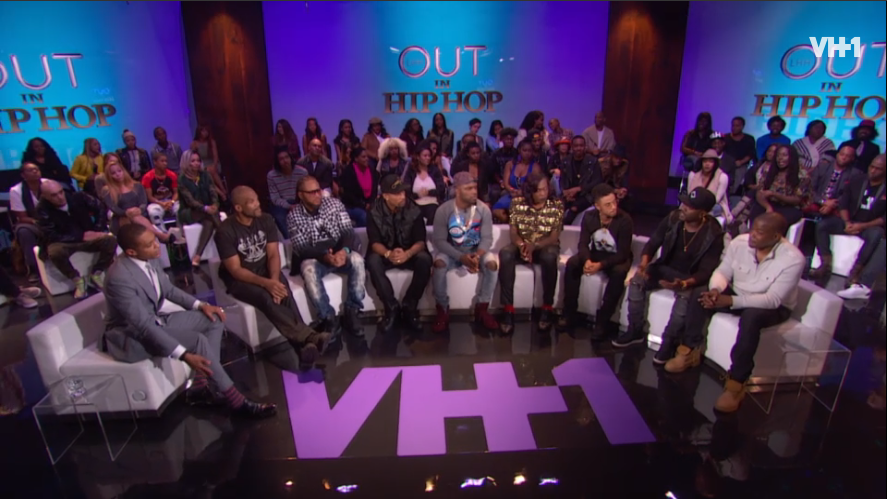 By all accounts, new ground was broken last night when it came to the public discourse of the intersection of the hip hop community and that of the LBGTQ community.  More specifically, the black LGBTQ community.  Following the season four premier of Love and Hip Hop on Viacom owned station VH1, an hour-long round-table discussion called “Out in Hip Hop” was hosted by ABC News correspondent T.J. Holmes.  More than just navel-gazing for the sake of reality TV watching, knowing that there was going to be a segment specifically about black religious culture, aka The Black Church, I was more than interested.

I tuned in one segment before the panel about the Black Church was on there, and we heard some of the same standard Christian liberal responses, namely from Rev. Delman Coates, pastor of Mt. Ennon Baptist Chruch in Clinton, Maryland.  Coates’ name may be familiar to a few because of the uproar that he caused black Baptists nationwide when he accepted the opportunity to share a panel discussion alongside Bishop Yvette Flunder of City of Refuge United Church of Christ in Oakland, California.  Flunder, who is openly lesbian, pastors a church that is open-and-affirming and many black Baptist ministers and pastors were up in arms over her being invited and also for Coates participating, alleging he was co-signing his lifestyle.  That particular segment also included Rev. Kevin E. Taylor, pastor of Unity Fellowship Church in New Brunswick, New Jersey who spoke of his “authentic audacity” to be openly gay and pastoring.

Rev. Jamal Bryant, pastor of Empowerment Temple AME in Baltimore, Maryland was a Skype guest and held the polar opposite view of homosexuality as a lifestyle.  His response was shouted down when he proceeded to use words such as “reverse discrimination” and for all intents and purposes advocated for counseling for gay persons at his church who would have a “transformation,” presumably away from homosexuality.  Former reality show star turned activist Karamo Brown was also on this panel and proceeded to shout down Jamal shortly thereafter.

It was one of those cringe-worthy moments on television.

I didn’t cringe because Jamal got shouted down by Karamo, I didn’t so much cringe because Jamal seemed so blunder-headed in his response, but rather I cringed because yet again, it seems like blackness was yet again on display worthy only of conversating and not conversation, not dialogical and reciprocal education and certainly not actual progressive action.  I voiced this on Twitter to an extent and most people understood where I was coming from and reminded me, appropriately so, that this was a first step; Rome wasn’t built in a day.  Far too often I see instances in which these conversations and dialogues end up being entirely too one-sided or people are asked to speak on issues that they simply don’t have the grasp to do so.  I watched last night wondering who were the power brokers that allowed that to happen and who picked who would show up.  Was this done for the sake of healing and bringing a community together, or was this simply a ploy for ratings.  Knowing America, and knowing the capitalist underpinnings of the various market forces, my money is on the latter.

Part of my issue with last night, specifically with the segment on the Black Church was that yet again, it provided such a one-dimensional viewpoint of what the Black Church was and is.  The closest we got to understanding the multifaceted and polyvalence of the black Christian religious experience was when Rev. Taylor said that it was the Black Church that gave him his “authentic audacity” to be openly gay and pastor a church.  Beyond that, the only other side we saw of that was in Jamal’s rather retrogressive rhetoric.  To that point, what Rev. Bryant said is bigger than Jamal.  It speaks to the denomination from which he comes from: African Methodist Episcopal.  As a pastor still in full connection with that denomination, he was simply “towing the party line” as do many pastors who are part of connectional churches.  Lest we forget, almost a year ago, the world was introduced to Andrew Caldwell and much of the fallout had to do with the denomination’s theological understand of homosexuality.

While individual churches can move outside of the party lines, they can only do so to a certain extent.  For example, the national United Methodist Church has not budged on the issue of homosexuality nor same-sex marriages, but that doesn’t prevent hundreds of UMC churches across the country proudly flying rainbow flags in their churches, partnering with LGBTQ advocacy groups and having members of their churches who are part of the LGBTQ community.  And for many Baptist churches that don’t have a national or regional governing office to which they are required to be connected to, they have been free to do whatever they want to when it comes down to how they choose to embrace or reject open and affirming theology.  Mt. Ennon Baptist Church is a prime example of what it means for leadership to opt to be open and affirming.

My fearful takeaway, the cause of my cringe, from last night is that Jamal Bryant will be seen as the face of the Black Church when somehow Delman Coates or Kevin Taylor are not seen as part of that institution; as though they have somehow transcended it.  I would argue that just as there were differing views on the panel about gender fluidity–that its okay for Kanye West or A$AP Rocky to wear dresses, but for rapper SIYA to embody a masculine image is problematic–the Black Church as an institution is made up of individual black churches that span the entire spectrum.

What I would have liked to see were persons from the Christian hip hop community present such as Lecrae to hear from a group that gets almost no national coverage.  I would have liked to see a larger display of black cis-gendered heterosexual pastors who have what amounts to open-and-affirming churches scattered all across the country.  Part of the narrative that I don’t think is fully accurate is that these churches are far too rare.  Clearly they are not in the majority, and are virtually non-existent in the rural areas of the country, but in many urban areas these churches are open and they are accessible.  Perhaps it would be the benefit of the whole if open-and-affirming churches came out of their own closets of denominational and communal safety.  Rather than being a functional lighthouse that doesn’t turn on its light and only secretly open to those that know it, perhaps it’s time to flip the light switch and be the citadel of hope that many claim they are.

My other fear, if not a stronger one, is when I watch my black and brown sisters and brothers, transgendered and cisgendered alike on corporate networks owned by media conglomerates like Viacom discussing these issues is that it sometimes removes the humanity of the struggle.  One of the realist issues that was voiced by a comment from audience was the murder of transgender people in urban areas.  Even in the midst of postulating about what identity one chooses, as Miles Brock tried to put emphasis on the “B” in LGBTQ, people are literally being murdered.  The passion about stemming the tide of violence against LGBTQ people is why Karamo was so insistent against the language choice that Rev. Bryant culled from what is otherwise an extensive vocabulary: people are literally dying.  It’s the same insistence that Black Lives Matters has when it has to mount the argument when police officers try and justify the harassment and brutality as just doing their job and feigning fear in a dangerous job that they applied for in the first place.

To that point, are we not all agents of a larger system the purports the in-fighting, the violence and ultimately the death?  Viacom, as a corporate entity, cares nothing about the deaths of transgendered people no more than its recognizes that black lives are worth mattering.  Talking about this much needed topic on VH1 is hardly revolutionary and we ought not desensitize ourselves to that blatant reality.  Sensational yes, revolutionary not hardly.  No more revolutionary than academics sounding off in nominally public spaces only accessible to those in that field.  Last I checked, sensationalism in and of itself is not a revolutionary act, merely a tool one can use for or against one’s ideological location.  What moves this from conversating to conversation is when people in power make the decision to come to the discussion and be willing to disavow themselves of harmful notions, ones that they know are both psychologically and physically injurious to the personhood of another human being.

But still, this is a topic in which we need not just good dialogue and discussion, but we need some actual action and progress to take place.  Last night should be seen as a starting point, the first baby step on a long journey in which many people may not live to see the finish line even in the distance.  What we saw last night was a mile wide and an inch deep; it was clear the discussion was geared to hit many broad topics and not drill down on much, and for me, that was disappointing.  It is a topic in which many people simply need healing.  The wounds are fresh and wide open and everyday is a struggle to keep from bleeding all over the place.

I conclude by offering up this point of social and theological reflection:

Rev. Bryant made this plea for transformation when it came to LGBTQ Christians, so much so that he advocated counseling that sounded akin to the type of junk science associated with conversion therapy that was denounced even by the White House earlier this year.  Bryant gets points for consistency dating back to as far as 2010 when he publicly disagreed with Carlton Pearson’s “gospel of inclusion” and took to task homosexuality and Christian doctrines, and famously how Bryant led a charge against Obama when the president openly advocated for same-sex marriage.  However, I ask the question, when will the transformation of the likes of Jamal Bryant take place?  At what point does such a theological intransigence be seen as a lie from the pits of Hell intent on causing oppressive harm against a large swath of people that you say you love?  It becomes a problem of gulliverian proportions when the weight of transformation is leveraged on the backs of the oppressed.  When the personhoods of oppressed people are the fulcrum by which oppressive structures are lifted, then the transformation doesn’t need to happen to them, but rather by the ones uplifting the oppression.