Skip to content
Posted on April 10, 2012 by the uppity negro

If I had to give this piece a subtitle to the subtitle it would be what the name of the article I have over at FWDNation “a devolution of postblackness in primetime.”

In case you’re wondering what I’m talking about, it stems from an interview that Touré gave on Piers Morgan’s CNN show two weeks ago.  Touré  was being interviewed about the cultural implications surrounding the Trayvon Martin case and this was on the heels of an interview that Piers had with Robert Zimmerman, the brother of Martin’s killer, George Zimmerman.  I watched the interview that Piers gave it was borderline uncomfortable to watch his brother fish for answers in the face of highly circumstantial facts and even higher speculations about what really happened between the end of the 911 tape and when police arrived on the scene to see a dead Trayvon Martin.

Touré, true to form, took issue with Piers Morgan for what he took as a softball interview apparently.  As if that wasn’t enough, Touré directly challenged Piers’ journalistic integrity and by extension that of CNN for allowing Robert Zimmerman to be interviewed.  Piers’ followed up about the flap that Touré had very recently found himself embroiled in concerning a tweet about “Zimmermaning” which Touré had used as a euphemism for murder.  He called it “dark humor” during the interview.

The icing on the cake came when Touré claimed that Piers wasn’t even qualified to discuss maters of race here in this country because of him only being 6 years a resident here in the United States.  Piers responded, in a terse British fashion “What a load of fatuous nonsense” and I promptly burst into laughter.  Honestly, what else could you say there?  I kept expecting Piers to really lose his cool because if it had been me, it would have been a repeat of Lawrence O’Donnell going off on George Zimmerman’s lawyer who walked out on an interview.  Piers held his cool and then lobbed a final barb as the last word that Touré definitely didn’t have the journalistic skills by saying “So we are different people.  I like to think that I’m a professional journalist, Toure.  I think you are something else,” and it goes to commercial break.

Touré has consistently, some might even say pathologically, in hot water when it comes to the systems of social media.  From his Tweets to his appearances on MSNBC as a contributor  and even to his essays that get published in various magazines and online outlets.  I always heard about this singularly named individual, but I never really followed him until recently.  I took him to task earlier this year when he suggested that “Lift Ev’ry Voice and Sing” should no longer be the Negro [Black] National Anthem and suggested a Marvin Gaye song.  I respectfully disagreed with what he had to say–emphasis on respectfully.  Then I ran across an article he did for Time magazine in a series of other articles entitled “Black Irony.”  Again, I understood his point of view, but I took some umbrage with the situation of blackness that he decided to take.

One of the working umbrella and catch-all definitions that Touré works with the understanding of postblackness is the disavowing of one’s self with the strict and narrow definitions of what does it mean to be Black.  Yes, with a capital “B.”  For any person of darker skin who has been accused with not being black, this is undoubtedly a question and an issue that we have replayed over in our minds at one time or another.  Touré opens his book in the first chapter giving the example of when he went skydiving and three black guys walked up to him recognizing his persona and politely and quietly told him that “Black people don’t do that.”  It births one of those extremely deep and pervasive questions about our ontological blackness: what does it mean to actually be black? 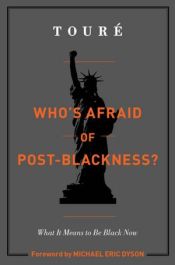 We live in an era we like to throw “post-” on just about any and everything.  This is the the post-Generation X generation; we live in post-modern times; the black youth born after 1990 are growing up in a post-Hip Hop era. Touré has joined the chorus in adding postblackness to the lexicon of this pop culture.  Touré has the style, the swag and the affectations of someone who ascribes to understand the notions of postblackness.  He has the right skin color: he’s not too dark, not too light, indeed the perfect blend of coffee and cream.  His natural hair images him with the likes of Aaron McGruder and Huey Freeman of “Boondocks” fame, which for most, align him with the right side of being black.  He speaks well, which translates into him speaking like a white guy, and that seals the deal that he is indeed post-black; he has transcended traditional norms about what it means to be black and therefore we should accept him as such.

Perhaps this is my own personal bias and my own tainted understandings about postmodern thinking as a dominating metanarrative, but Touré is indicative of one who has created a concept that justifies his own sensationalist means.  To put a fine point on it, if Touré’s on-air spat with Piers Morgan last week is any indication of his true modus operandi then Touré is more interested in personal gain than enriching the common good.  For anyone that has kept up with my writings, I have consistently taken to task those who favor the sensational over the substantive.  If this is what Touré has to offer, then I want no part of his brand.

Obviously, Touré is a man of substantive intellect.  He’s well published and well-respected and has a curriculum vitae that would put anyone to shame.  What Touré has done, I believe, is to brand himself as a firebrand (post)black public intellectual.  Which in and of itself isn’t a bad thing.  But what bothers me, and I believe I’m not the only one, is that his firebrand is that of a pedantic and supercilious harpy.  As a result of this branding that he has done, I think he has rendered his postblack argument null and void.

Consistently he argues from the modernist vantage point ofbeingblack.  That there is one, universally accepted way of viewing things, or that at least there should be.  It was clear when he made the argument that Morgan was essentially unqualified to speak on the deeper matters of race in America.  This type of race privilege move is one that we’re more familiar with coming from the likes of Revs. Jesse Jackson and Al Sharpton or Dr. Cornel West.  But let’s be honest, none of these men would have been so brash in making that assertion.  To do so marginalizes their fellow conversant and the main issue at hand never gets discussed.

Let’s not be confused, positing postblackness is not the same as the conversation about a postracial America.  The two do not exist in the same sphere and for the time being, I think shouldn’t.  Postracial discussion in the public square do nothing but sweep the issues of racism and fundamental racial prejudices and bigotry under the rug for the sake of avoiding a confrontation.  Postblackness specifically is asking blacks, primarily, to reify the space in which they occupy blackness.  If and only if that happens would I think we would be ready to even entertain the arguments for a postracial America.

The devolution of the postblack argument before it gained any real traction disappoints me.  The sole proponent of this concept is Touré in the form of a Generation X voice, one that usually identifies with the hip hop generation in some shape or form.  What he had to say is worth saying and probably as it’s own is a concept that carries enough of a sensationalist bent that it would sell itself.  Instead,  Touré went for the low-hanging fruit and decided to put on the brakes with this particular line of discourse.

Per the ontological black struggle, and par for the course,  Touré is both provocateur and pimp; selling his brand of intellectualism below market just to make a name for himself.  One might charge that rather than being the pimp, he is the one being pimped, out a’ whoring for a social media brand that gorges on sensationalism for their own livelihood.

My simple advice to  Touré: it’s not worth it.