Skip to content
Posted on November 6, 2011 by the uppity negro

I frequent the movies often enough so I had probably seen trailers for the Justin Timberlake movie “In Time” before most people and the concept that time itself was a commodity had certainly piqued my interest.  It aroused my senses because being descendants of African slaves here in this country, time as we know it, is a wonder to behold.

Any study of ancient African cultures birthed on the west coast would discover that time is not linear; it does not progress seamlessly on a continuum stretching in a straight line from one end to another, but rather it has creases and buckles and even at times becomes circular.  Please believe it was not circumstance that when Disney decided to do a movie set in the east African serengeti plains that the major theme of the movie was the “circle of life.”

Time within the context of the African American community has often times placed us at odds with dominant society.  Historically blacks were seen as shiftless and lazy because of a failure to be on time.  So much so that there’s a running theme across this country about “CP time.”  It could be an event and they tell people to be there at nine o’clock and without fail someone will murmur “is that CP time?”  No, not some weird concoction of “Central Pacific” but in fact, “Colored People’s time.”  No, this isn’t birthed out of an inherent laziness or some innate inability to be on time, but rather it is a sense of “when it happens, [whatever it is], it will happen at the right time.”  It’s almost a direct resignation and surrender to forces outside of human existence that are in control of earthly happenings; whatever time and under whatever circumstances it happens, is when it was supposed to happen.

While I had seen the trailer, I was unaware of the level of which time had become a commodity.  The movie was set in a typical dystopian near future I suppose and time was the only commodity.  To exchange goods and services one exchanged time.  With a glowing neon green counter on the left arm of

every individual counting the years, months, days, minutes and seconds, if one had enough resources, one could virtually garner a level of immortality.

“For a few to be immortal, many must die,” was a quote uttered more than once in the movie as the main character, Will Salas, played by Justin Timberlake experienced his journey in time.  After living a day to day existence getting doled out mere minutes and hours from factory working, he forces his own destiny and winds up getting a century’s worth of time.  Living in general ghetto of Dayton (although obviously the movie was filmed in Los Angeles), he uses his new found wealth to travel between time zones to the place of New Greenwich where everyone can tell he’s not from around there–because he does things too quickly.

Without ruining too much of the movie, it was an interesting forward and liberal movie plot that saw the target of the concept of wealth redistribution and aimed for the bullseye.  I thought the movie couldn’t be more on time given the Occupy Wall Street movement and this concept of the 99% versus the 1%.  In a day an age where Youtube and other social networking has fueled much of the protest, to see the likes of “South Park” parody the police as overbearing and mindless, and to paint the media as clueless (as it was an “Occupy Red Robin” movement, not the intended target of the protest in the episode), this movie was certainly an eye opened.

Much of the plot discussed how in order for the few (read: the 1%) had the power and ability to stay immortal at the expense of the many, (read: the 99%).  In a society where persons genetically didn’t age past 25, years after that were spent trying to get as many years as possible.  This movie explored predatory lending practices of banks, and I daresay payday loan sharks in poor communities, the day-to-day grind of working class persons who have to struggle daily to make ends meet.  To see a dead person on the street wasn’t uncommon in this movie–people just “timed out.”

I think it’s safe to say that Hollywood has a decidedly liberal agenda.

And that’s fine by me of course.  But we all remember those “special episodes” of the family friendly and kid friendly sit-coms of the 1980s and 1990s that discussed everything from drug use, to bullying to divorce, teen pregnancy, gang violence and tolerance.  I’ll never forget the “Family Matters” episode when “nigger” was written on Laura’s locker, or even the “Moesha” episode when they dealt with a young man who was in the closet with his sexuality.  We don’t see a lot of movies and stories that laud the conservative point of view.  Most of the classic books that take the dystopian world view from Brave New World  to 1984 and movies such as “Soylent Greens” all take a liberal approach to politics and social matters–this movie is no different.

I think it is interesting that these movies, these books, these works of art get such wide acclaim.  In lieu of neo-conservatism running rampant thanks to the Tea Party movement and an ever increasing irresponsible batch of politicians who say and do whatever acting in sheer impunity I fail to see how does an electorate fail to connect the dots.  It wasn’t coincidence that the poor people in the ghettos were always “timing out” of life because they were always rushing to get more time, never enjoying the luxuries of time to sit back and relax.  For poor people, the “time is money” concept means that if they aren’t working, they aren’t making money.  For the rich, the few, the 1%, they’ve reached a level where their money works for them even when they’re our of time–so to speak.

I think in the next three to four centuries, this “experiment” of global capitalism will  have wound itself down.  At this current trajectory, the world market isn’t in the position to maintain such highly concentrated levels of wealth.  Am I arguing for wealth redistribution?  No, on the basis of impracticability.  I am, however, siding with the progressive idea that people should pay proportionately to their income.  The flat tax idea is laughable because it unfair taxes the poor, and the progressive tax structure we’re on right now still doesn’t appropriately take into account those at the opposite ends of the income spectrum leaving the majority of the tax burden on the middle income makers.  It’s absurd that we’ve elected politicians who think that taxing the rich, and imposing a “millionaires” tax will dissuade businesses from hiring.  The typical GOP talking point operates on the idea that everyone, based on hard work and a rugged individualist work ethic is going to be a millionaire flies in the face of the fundamental concept that “for a few to be immortal, many must die.” 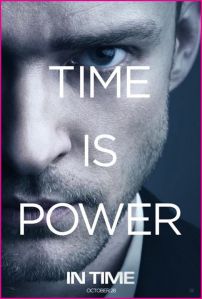 Unfortunately, the white poor of conservative bastions such as Alabama, Georgia, Tennessee, West Virginia and south central Pennsylvania that make up the Appalachians are just as disenfranchised as blacks and Latinos in the urban ghettos.  These poor people can’t afford to move across “time zones” as in the movie.  These people, these poor people, are locked into their geographical regions unable to afford basic transportation, unaware of a world going on outside of their immediate surrounding.  Where their lack of time is a constant stresser that leads to serious health problems.

….this was a movie to let the 1% know that there will be a day when the proletariat will rise up and challenge the system of capitalism.  Forgive me if I sound a bit Marxist, but I think anyone with a brain can see that eventually one day, our exit to capitalism will come and it would make sense for us not to be in the left lane and have to cut across five lanes of traffic to exit and cause a pile up in the process!  I think when the history books are written they will have to point to the Occupy Wall Street movement and the severe financial problems facing many of these European countries–who are in the Eurozone mind you.  It’s barely been past one decade and these countries on the Euro as a monetary unit are facing these severe austerity measures.

Whatever the case is, let it be known that there are people who are awake.  I encourage all of us to stay vigilant.

P.S.  On an unrelated trivial note, Wikipedia informed me that characters in the movie were named after real life watch brandnames.

One thought on “Hollywood Social Commentary is just ‘In Time’”