Skip to content
Posted on August 10, 2010 by the uppity negro

In fall 2007 self-proclaimed black conservative Shelby Steele wrote a short book A Bound Man: Why We are Excited about Obama and Why He Can’t Win and of course Steele was left having defend mercilessly not just the thesis of his book, but also the title of his book shortly after 11 pm EST on November 4th, 2008. Steele actually just chalked it up to a marketing ploy to get people to buy his books.  Sure. And Sarah Palin titled her book “Going Rogue” because she knew what the word “rogue” meant and could use it in a sentence.

Obama’s candidacy and ultimate election was probably more monumental because of the unprecedented sweep of Democrats into Congress.  The Democrats secured a 60-seat filibuster proof majority and still maintained a comfortable enough majority in the House.  Never in my short life time had I seen such a swing of power.  Much of the Bush administration was marked by a Senate split 50-50 with Vice President Dick Cheney as the tie-breaking vote and even GOP controlling the House, and a Supreme Court that usually erred on the side of conservative values.

That being said, many of us, myself included have criticized the way President Obama has handled himself in some instances.  That was really code word amongst black people that we wanted him, in the words of Average Bro, to “channel his inner Negro” and be more like Principal Joe Clark rather than the one who drove around Miss Daisy.  Those instances led to fiery barbershop and beautyshop discussions no doubt following the Henry Louis Gates comment during the press conference last summer, how he responded to South Carolina U.S. congressman Joe Wilson’s “You Lie!” outburst during a joint address to Congress last fall, and even recently how Obama and also the Obama White House has reacted and responded to FoxNews in the wake of the Shirley Sherrod situation.  Fact of the matter is that aside from a rousing State of the Union speech where Obama gut checked the GOP party for being the “party of No” and reiterated the phrased “let me be clear” to drive home is point, Obama’s never lost his cool.  Aside from the “who’s ass to kick” comment surrounding the BP Gulf of Mexico oil spill, we really haven’t gotten a sense of anger mixed with urgency from Obama.

But this isn’t yet another post trying to dissect issues of “blackness” surrounding Obama and his character and how he handles himself in the White House, there’s been enough blog posts from others about that. No, I want to discuss why Obama can win in 2012.  That is barring anything catastrophic in the next two years before election day 2012.

Reason number 1. Obama’s list of accomplishments. Seriously, since Obama has been in office, about 90% of what he’s done has turned to gold.  Here’s just a short list of things he’s accomplished just off of the top of my head.

And those are issues pertaining to legislation.  Not to mention that the bailing out of the automobile industry actually seems to have been a good idea because it kept them afloat and has indeed kept jobs.  Obama has survived the BP oil crisis.  Seriously, by October the country, collectively won’t even remember that crisis.  And this combined with Obama’s still rockstar status.  The guy is a PR director’s dream.  Obama is good to keep up appearances and can still draw a crowd of supporters wherever he goes. 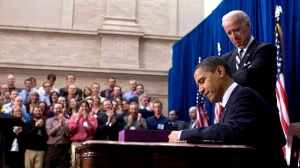 Granted the new Wall Street regulations from all accounts is really just business as usual, I think Obama gets credit insofar that getting legislation looked at is a step in the right direction.  Same with healthcare.  I still can’t go to any hospital I want and get medical treatment paid for by some governmental agency if I don’t have healthcare from an HMO.

Reason number 2. People don’t think he’s an evil person. Bush seriously had an image problem by the time he left office and there wasn’t much spin that conservative pundits could do about it.  Discounting FoxNews as a legitimate news source, Bush had engaged this country in two wars concerning terrorism overseas that at the time seemed interminable and had done a pretty decent job of tanking the economy.  Surpluses were deficits not just in federal government coffers, but in state and municipalities nationwide; mothers and fathers were burying their children as war casualties and hanging yellow ribbons on tree-lined suburban neighborhoods and Bush’s approval rating plummeted to the upper 20th percentile. An unheard of low.

Obama’s image problem comes from the Tea Party movement and that’s about it.  And even if Tea Party backed GOP candidates such as Rand Paul from Kentucky, Sharron Angle from Nevada or even Nikki Haley for governor in South Carolina were to actually win, it still speaks to general voting patterns.  It’s certainly not unusual in history for electorates to vote for the opposing party when it comes to mid-term elections.  The Democrats possibly losing the House or the Senate still wouldn’t dictate him losing in 2012.

Reason number 3. The Republican Party is in complete disarray. Never has the Republican party been so off message in recent history. And this is thanks to the Tea Party movement, the personhood of one Sarah Palin and the foolishness at FoxNews cable network station.  Granted its very early for Republican front-runners to begin campaigning in earnest, and certainly early to have announced candidacy for the Presdient of the United States, honestly, can anyone really see a viable Republican candidate. From a sea of candidates, in no particular order, I’ve heard Newt Gingrich, Sarah Palin (of course), Minnesota Governor Tim Pawlenty, U.S. Sen. Evan Bayh from Indiana to utter conservatives such as Mississippi Gov. Haley Barbour or relative political newbie Louisiana Gov. Bobby Jindal.

And none of the aforementioned is ready to go against a Barack Obama in the campaign season.

Additionally, the Tea Party is so off-center from traditional GOP members it’s not even funny.  The campaign of Sharron Angle is pure comedy with her wanting to abolish the Department of Education, the IRS tax code and even the withdrawal of the U.S. from the United Nations.  Granted she’s not running for a national office, but seriously, this is the level of absurdity that the Tea Party is backing.  And no self-respecting old school conservative would ever talking out the side of their neck as such.

And then there’s the Michael Steele fool factor component.

The guy’s a walking joke.  He has no credibility in the black community.  Honestly, black folks have more respect for…well, let’s not tell a lie and say your average black person has any respect for a black Republican, so dismiss what I was about to say.

All in all, Obama has had a pretty decent past 19 months or so.  Especially compared to the progression of things in the Bush administration.  Yes, we should hold his feet to the fire and criticize him as we see fit.  He’s only a man, and an elected official at that.  We, as the citizens of this country have our God-given right to criticize.  My criticism is not warranted on how others may view it, but based upon my own convictions.  The right-wing media makes it their duty and calling in life to twist speech for their own good–I’m not worried about them.

While Obama has done good for this country, the uber-progressive inside just wishes he would do more and go a little farther.  I wished he had pushed for the public-option in universal health care.  Frankly, can we even call it universal health care without a public option.  And as I said earlier this Wall Street reform seems like the same b.s. warmed over.

But he’s a politician, what can we say.

What are some accomplishments that you can think of under the Obama administration?  What are some legitimate criticisms you have?  Who do you think are legitimate GOP contenders for the 2012 election?