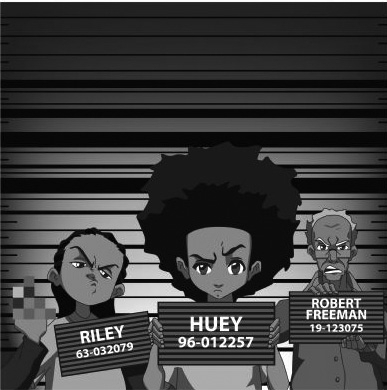 I actually completed a full series for the first time in my blogging career.  I was supposed to do it consecutively, but I just didn’t have it in me, but I completed it nonetheless.  I took it upon myself to discuss each of the Boondocks cartoon characters and highlight various episodes that I felt best highlighted their character traits.  I pitted some against the other given the script to show how I felt they truly were created to be.

Here is the list of characters that I analyzed and if you click on the hyperlink it should take you directly to the blog article:

I refused, or at least tried my best to not fall into the trap of making each of the characters one-dimensional and viewing them as stereotypical characters.  Case in point, I tried not to paint Riley and Huey as the yin and yang of black urban maleness, but rather attempted to go a bit deeper in the discussion.  I did this because rarely is the surface truly who the person is.  Generally what we manifest on the surface is a result of deeper issues and past experiences coming to a head.  About the only person I intentionally portrayed one-dimensionally was Uncle Ruckus.

I hope you enjoyed this series.  Make sure to go back and leave comments as you see fit.

5 thoughts on “A Character Case Study of The Boondocks: Conclusion”