Skip to content
Posted on July 8, 2010 by the uppity negro 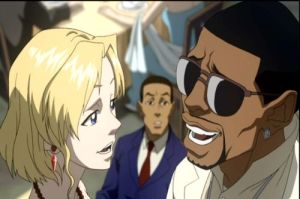 The DuBois family of Tom, his wife Sara and their daughter Jazmine is an interracial family, with Tom being black, Sara being white and Jazmine being the interracially mixed child of this union.  The family lives along with the Freeman clan in the suburb of Woodcrest and the family appears to be friends with the Freeman clan.  Tom makes many more appearances in the course of the show than his daughter, and the wife Sara even less than those two.

Interestingly, given the lily whiteness of the suburb, it’s no shock that the DuBois family chooses to live out there.  McGruder has yet to really give an indepth picture of the family life of the DuBois household which I think is interesting since we are given an image of who Sara is.  I say this because every other character, and even a minor character such as Stinkmeaner or Thugnificent have whole episodes that allow for a character picture to be drawn.  The closest the viewer understood some of the family dynamics of the DuBois family was when we get a glimpse of Sara, and finally have some motivation for Jazmine’s character being the product not just of her father, but her mother as well.

I will dissect each character of this family and highlight various episodes in which I think their true motivations lie.

The character of Tom DuBois, particularly after watching his character in action automatically makes many black viewers wonder about the personhood of black intellectual and scholar  W.E.B. DuBois and the notion of “Uncle Tom.”   Which further pushes the irony of his name with DuBois’ idea of “double consciousness” that is present in Tom’s character.  Tom comes off with an aloofness and naiveté that’s somewhat off-putting.  Namely this comes off in racial issues.  His sheer daftness comes through early in the show with “The R. Kelly Trial” where he’s unable to prosecute R. Kelly for being unable to maneuver the cultural milieu surrounding the dynamics of the trial.  And even again, Tom’s character progresses to hating black people after listening to Uncle Ruckus in “The Passion of Uncle Ruckus.”

However, this inability to deal with the more unpleasant aspects of reality, even if race isn’t involved, is troubling to me.  This happens in the “Attack of the Killer Kung-Fu Wolf Bitch” where he had received an urgent email from Huey about Luna, Tom ultimately becomes kidnapped by Luna because of his inability to face reality.  The whole concept of his phobia of being anally raped finally playing itself out in “A Date with the Booty Warrior” seems absolutely ludicrous, yet takes a much more critical eye.  It seems to be the intent of McGruder to tacitly link Tom’s naiveté to his inability to ontologically identify himself as “black.”

Tom comes off as a cartoon version of Carlton Banks from NBC’s early nineties : always shocked when his skin color and not his bank account becomes a determining factor in how they are treated and viewed by larger society.  It’s as if Tom has created an alternate reality of political correctness in which on he lives in–even his wife doesn’t live in that bubble with him.  However, I’m wondering what is McGruder really saying by trying to draw a correlation between a skewed worldview and reality with one’s true blackness.  Whatever the commentary that McGruder is hinting at still proves problematic for me because to say that the more “black” someone is the more truer their worldview is.  Tom has historically had run-ins with the militant and revolutionary responses of Huey and generally whatever Huey says goes completely over the head of Tom who feels safe in his politically correct microcosm where he was able to marry a white woman, have an interracial child, be a member of the NAACP and support Barack Obama’s presidency.

But, what I think McGruder also does is masterfully interject is issues of masculinity into the conversation.

Tom’s masculinity is often times called into question in tacit (except for Riley’s predilection of calling everything “gay” that he doesn’t understand) yet direct ways.  The whole notion of him fearing being anally raped is such a wildly preposterous phobia (that it is still taking some time for me to wrap my mind around it) but goes directly to notions of masculinity and black maledom.  The “taking of manhood” happens through castration or male rape.  Tom also faces issues of masculinity by feeling emasculated by his wife who has a thing for Usher and for Barack Obama–and Tom is aware that it’s an issue of blackness as to why his wife is attracted to Usher and to Obama.

So, Tom DuBois exists in an alternate reality, but still faced with grappling with his masculinity in the context of a questioned ontological blackness.

Damn. Sucks to be black sometimes don’t it?

I have mixed race relatives, therefore some white cousins who have married into my family and I can’t help but remember one instance when one of them a few years back was just totally enthralled at my hair because I had 360-waves in it and they couldn’t get their hair to do the same thing.  And I remember that they had some off-the-wall questions about being black and living in Chicago.  Nothing super direct, but probably more a result of them just having their older cousin around and wanting to show me everything and tell me everything and play video games with them.

But, they weren’t confused about who they were, so that’s why the character of Jazmine somewhat seems off to me.

Going to a mixed high school, with at least a 20% representation of blacks, whites, Asians and Latinos present and having to wade through the melting pot that drew delineations between the nationalities of Koreans, Chinese students (and those that spoke Mandarin and those that spoke Cantonese) and a few Japanese students;  the vast population of Puerto Ricans and Mexicans and other Latin nationalities; and those that had German backgrounds, or their families were from France, those from Poland or even those that claimed that they were Jewish migrated from certain eastern European countries.

And there was us.

“Oooooh, my gran’mama from Mississippi.”

Seriously, our ancestral home was a 12 hour car ride away.

I said all of that to say that there were a fair number of  mixed race students at the high school I went to, and while they certainly had a different worldview than I did and perhaps could come off as ignorant, perhaps naive in certain instances when it came to mainstream black culture, none of them were confused about their identity in much the same way that Jazmine is portrayed.  We see this evidenced as Jazmine so easily mixes the images of Jesus and Santa Claus.

I feel sorry for her because McGruder rarely provides her with safe ground, not even by her parents.  Mixed children already have it tough enough because society thrives on clear cut categories and boundaries and anything that creates shades of gray is considered “other” and we shy away from dealing with it.

Huey completely dimisses her and looks at her with almost the same level of disgust as Uncle Ruckus would.  Perhaps its more an indictment on the black community that identifies with the personhood of Huey rather than the notion of her mixed race heritage being a negative.  How is she supposed to address her identity if Huey never takes the time to actual talk to her and with her rather than always talking at her.

And perhaps it’s a parenting issue as well.

If her mother is always sexually attracted to black men who are not her father, and her father has a warped sense of reality, then it’s no wonder she’s able to fully meld the image of Santa Claus and Jesus Christ as she so wonderfully did after mounting a pulpit.

Honestly, Tom’s wife is almost a joke.  There isn’t much to say about her past McGruder painting her as the white woman secretly wanting some black dick.

Sorry for being so vulgar, but that’s really what it amounts to–we’re all adults here right?

There’s always been this sexual dance between black men and white women that have birthed all types of pathologies and perceived psychologies on both sides of the aisle.  Whereas historically Eurocentric racist and hegemonic thinking has painted black men as always pursuing white women as another level to justify hatred of blacks.  This rhetoric has provided for black males to be shown as basic and sexual creatures–predators even.  We’ve seen this in art forms such as “Birth of A Nation”; in Harper Lee’s classic To Kill A Mockingbird and in the sordid , disturbing and tragic history surrounding the massacre in Rosewood, Florida in 1923 and even the dynamic surrounding Emmett Till’s death in Mississippi in 1955.

But, even from the classic “Guess Who’s Coming to Dinner?” it was a white woman coming to grips with her black lover.  And this dynamic was flipped where the white woman was the pursuer in the comedic movies of “Life” where the warden’s daughter had an affair with one of the inmates (Bokeem Woodbine’s character) and in the premier example of coonery, Tom Arnold’s wife, Missi Pyle in the buffoon movie “Soul Plane” where she was totally lusting after a black man.

In a reversal of Kanye West’s famous quote, I think it’s safe to say that Aaron McGruder doesn’t like white people.

In comparison to the Freeman familial unit, I think the DuBois familial unit is an interesting amalgamation of character traits and personalities that find themselves under one roof, and one that McGruder never capitalizes on.  I think it would do wonders to have a show that really showed some of the character motivations and how they interacted amongst themselves.  For right now we have no real true understanding of the interaction of Jazmine with either of her parents.

That’s an interesting way to image an interracial family.  But that’s just my opinion.

To my readers, what say ye?

12 thoughts on “A Character Case Study of “The Boondocks”: The DuBois Family”