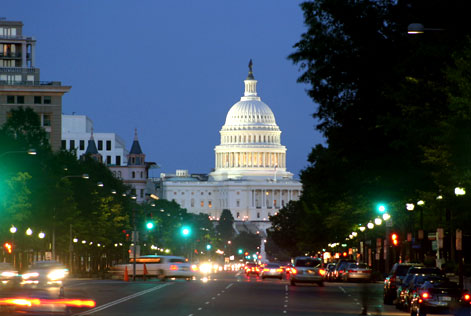 Anyone who’s known me since about, oh, 2005 knows where my ultimate goal in life is: Washington, D.C.

I know sometimes you’re supposed to keep some things “close to your heart” a lesson many of us hear preached and taught to us via Joseph the dreamer from the Hebrew Bible book of Genesis.  We all know the story of how he had dreams concerning his family and how his brothers got jealous of his dream interpretations and we all see the trouble he experienced.  I think it’s interesting, however, that most times when I heard the story from the pulpit, the preacher never connected the fact that if he hadn’t told anyone about his dream that the life sequence he encountered may not have occurred.  That is to say that there stood a good chance that he wouldn’t have been tortured by his brothers, thrown into a pit, and ultimately sold to Potiphar in Egypt—that is to say, he wouldn’t have had the ability to live the life of royalty.

Okay, maybe I’m stretching this a bit and coming off as promoting the “health and wealth” vantage point, but you all get what I’m saying.  So simply stated, my life’s dream goal would be to get this Master’s of Theology and go into my Ph.D. program, and it would be nice to graduate before my 30th birthday and just walk around for a few months with the ability to say “I have a Ph.D. and I’m only 29.”  I figured that whatever that next Sunday after my degree has been conferred I’m probably going to dance right out of my clothes like David—having undignified praise—and jus totally do the “saints don’t hold me” dance in church.  Then that Monday after graduation I’m going to go into hiding for about two weeks, which really means I’m going to either be in the Caribbean or in the Polynesian islands like Fiji or something getting DRUNK OFF MY ASS because the thought of never having to open another book and turn in another paper to a professor for THE REST OF MY LIFE would be a thought that I can’t even fathom right now.  Probably come back and enjoy a full summer of rest and relaxation—and then actually worry about marriage.

That would be nice as far as the marriage part, but I’m not going to be able to totally rule out marriage during my doctoral studies, 30 seems to be late starting on a family, but, I guess.

What would be ideal would be that—ahem **clears throat** Howard University, aka The Mecca would absolutely LOVE to hire me in the Divinity School as the new assistant professor in homiletics, and I would be like the next great thing smoking!  Ya know, hopefully by then my whole ordination/licensing thing would have worked itself out.  Wanna do the whole UCC thing, but clearly I’m dragging my feet on that as we speak, so ya know in the Baptist churches, all you gotta do is be able to preach and they’ll minimally license you.  Ordination simply means you have to submit to being in the old boys network.

Get the teaching job at Howard Divinity School, and I’m sure I’d be making money from various preaching and speaking engagements across that country because I’m going to be one of the few black Ph.D.s in my field and of course I’m sure many institutions will want to hear “the black perspective” and they’ll call on me.  Why? Because hopefully my dissertation would have been the absolute shiznit and I’ll just be all that and a bag of chips.

As far as D.C. is concerned, I’m still debating about where I want to live in the DMV.

I actually liked when I was out in Montgomery County, aka MoCo which is the northwest burbs of the District.  But when I was in Gaithersburg, well, technically North Potomac (lol), albeit the Red Line went all the way out there, G’burg was still just a bit far.  Somewhere like Bethesda or Rockville would work for me.

Sadly, I never got the PG County experience, lol.  Guess I’ll have to go out that direction next time I’m up there.

Only reason why I’d be hesitant to live in the city is for one reason and one reason alone:  I want my vote to count dammit!  And I guess I’m taking the Keyesian advice and actually thinking about moving to Maryland.

Nor Southeast DC—at least I don’t think.  I haven’t been over to that side of town since 2001 when I went with my church on the college tours and we stopped in Anacostia over on Cedar Hill to see the Frederick Douglass House.  That area just reminded me of Baltimore and Philly.  But I remember getting off at the friggin Eastern Market Metro stop for the inauguration this January and that part didn’t look bad.  Actually, I don’t remember the neighborhood names, but I know how expensive the houses have gotten not far from the U Street corridor and around Howard in the last few years, so I’m sure with regentrification sure to be going on in Soufeast that of course housing prices are sure to go up.

Which again puts me somewhere in Maryland.

Well, I remember driving down Georgia Avenue or 16th Street coming down from the Beltway to drop into the city and I always thought the houses in those areas seemed about as decent as you could get for city living.  The only problem is that D.C. Public Schools are abysmal.   But then what major city doesn’t have a public school problem?  I was just lucky when it came to my public school education in Chicago; I just happened to have a mother and father who cared for me and took an interest in what school I attended.

But that’s my plan.

I would love to take up residence in D.C. for the rest of my life.  It’s a decent enough climate where they experience four complete seasons, the Eastern Shore isn’t terribly far which means the beach—the REAL beach, not 63rd street on the lake—is a nice option for a weekend trip with the fam.  Also, D.C. is a mecca, in some sorts for YBP’s otherwise known as Young Black Professionals.  There are plenty of options for growth and development in an all black community of people who look like you.  I could see myself moving in with my first apartment in the garden apartment and starting out till I got on my feet to move somewhere else.  Ya know, fighting for parking and just leaving my car there and walking to the Metro to get where I wanted to go.

I know this post had nothing to do with nothing, but I’ve been meaning to post one of these “about the blogger” type posts and shed just a little bit of light into the life of this one uppity Negro.

I always made some joke that if by some chance of fate or Providence that if I magically were offered some paying opportunity in D.C. right now, I’d quit whatever it is that I was doing and load up the Cruise Ship and head for D.C. no questions asked.  I mean that would be one helluva opportunity because at minimal they’d have to set me up with housing and I’m quite sure that expecting all of that is a virtual impossibility.

Hmmm…but we say with God nothing is impossible.  I guess we’ll all be watching and waiting.

Look out for the next city I could see myself living in.  Any guesses?

Leave a Reply to B. Michael Honor Cancel reply