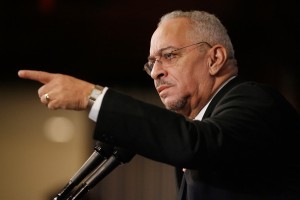 Let me just lay my cards out on the table and be rather blunt:  I haven’t agreed with everything Rev. Dr. Jeremiah Wright has said over the past few years.  Actually, for me the biggest aught I had with him was how he hand-picked his successor following his retirement.  It was my understanding that since the polity of the United Church of Christ was congregational, just like the Baptist churches, we were to have a pastoral search committee and the congregation would ultimately vote on their pick.

No voting took place at that church.

Not saying that Rev. Otis Moss III was a bad pick or that he wasn’t qualified for the job, it’s just that something about how it was done doesn’t sit right with me.  Moreover, I think the fact that those who stayed, of course, agreed with that decision, but more or less said “I trust my pastors decision” and I really question to what level do we really defer to our pastors?  We say we don’t put them on a pedestal, but we really do.  Seriously, if this had been at some other membership organization and a vote was never called, there would have been hell to pay.

But not at the church house.

That being said, while I may have disagreed with him on how that went down back in 2006, there’s really nothing much that I disagree with him about now concerning his recent comments about “them Jews” at the Hampton Ministers Conference in Virginia.  Well, he has zero tact.  But I guess that’s just par for the course.  But what I think is interesting, and highly disturbing is the collective psyche of this country.  As far as Jeremiah Wright is concerned, it goes deeper than just your general run-of-the-mill, jingoistic, FoxNews watching, pro-American, anti-everything else ideals.  While we have Barack Obama in the presidency, the conservatives are accusing him of being a Socialist hearkening to the ideals of Stalin, but yet and still we have this weirdo conservative media bloc that’s done a damn good job of influencing the people.

Seriously, I live in a country where to be pro-Palestinian is anti-American.

If you let Sean Hannity, Glenn Beck and Bill-O on their good days tell the story, we should go back to the McCarthy days and start hauling folks in front of tribunals across the country accusing them of anti-American behavior.  Moreover, the fact that even Keith Olbermann made the claim that Wright was “not a man of God” then clearly, I’m quite interested in what molded and molding the psyche of this country.

I mean, for us to categorically dismiss Wright as anti-Semetic because of the verifiable ethnic cleansing that’s taking place on the Gaza strip in the name of Yahweh?  So we, as a country have more problems with a man who simply points out an inhumanity than a theocratic government that’s systematically attempting to eradicate Palestinians.  So if you talk bad about one, singular, individual Jewish person, you’re labeled, automatically anti-Semetic.  Black folks seem to be the only one’s who’ll entertain whether or not to label someone else racist or not.  We’ll have debates and conversation about it; not saying that’s a bad thing, but we’ll accept the statements from AIPAC over that of the Urban League, and most certainly that of the NAACP.

I think Bill Maher, last night on his show “Real Time” said it about as best as possible:

I mean seriously y’all, we’re playing around here and people are dying daily in our own backyards, across town, in hospital beds, in nursing homes, and not to mention overseas and we still have yet to take this fight to our elected officials.  This mentality of go along to get along has been the silent killer in all facets of American life, especially in the black community.  I mean, hell, how long did we hear the mantra “Lincoln freed the slaves” and not the fact that it was a series of events from people such as Toussaint L’Ouverture, David Walker, Frederick Douglass, Crispus Attucks, Harriet Tubman, Gabriel Prosser, Denmark Vessey, Solomon Northrup and Nat Turner.

Nawww….it was someone else who did it, cuz we didn’t wanna rock the boat too much.

Last time I checked, the boat rockers were the one’s that got something done—so I’m here to serve notice to whomever reads this post, that if you think that Jeremiah Wright was bad, you aint seen nothing yet.  I am personally here to declare that this uppity Negro will be unashamedly Black and unapologetically Christian at the same time speaking truths that empower.  And since the establishment won’t like it, so be it.  I’ll have some company, because I’m quite aware that I won’t be alone.

The position of the prophet in the Hebrew Bible usually invokes the names of Jeremiah, Isaiah, Ezekiel, Daniel, Hosea, Amos.  Keith Olbermann charged Wright with not reading the Bible.  Has he not read it?  Last I checked all of those prophets received a word from the Lord and were required by Yahweh to deliver the word, uncompromising to the Israelites.  Jeremiah accused God of deceiving him by chapter 20, and this was after he had gotten beaten up and put into stocks, I can only imagine how our contemporary Jeremiah Wright feels.  But the scripture goes on to say:

Whenever I speak, I cry out proclaiming violence and destruction. So the word of the LORD has brought me insult and reproach all day long.  But if I say, “I will not mention him or speak any more in his name,”  his word is in my heart like a fire, a fire shut up in my bones. I am weary of holding it in; indeed, I cannot.

I think we need to be very careful about what we listen to, and how we’re filtering the information we’re receiving.  I made a comment on AverageBro’s blog when he dropped his “Negro Please” post including Wright, that its interesting that we won’t mind taking a comment out of context for someone that we don’t like, such as Wright in this case, but if it’s someone we do like, such as Supreme Court Nominee Sonia Sotomayor, we’ll do homework to find the full context of their comments.  I mean every black blog I went to had found the full speech in which she made her comments and leveled charges of the Right and Conservatives being unfair taking her comments out of context–what’s the difference with Wright?

[Editors Note: Btw, ya boy’s  been under the weather all week with acute tonsilitis and I started antibiotics Thursday evening.  I finally got rid of the low grade fever last night that had been plaguing me most of the week, just waiting on this pussy mess at the back of my throat to finally clear up.]

Aside from the insertion of “them Jews” do you really disagree with Jeremiah Wright’s comments?  Or do you agree with them?  Do these comments label him an anti-Semite?  If Wright had been a white man and had made the comment “them blacks” or “them Muslims” would it be the same?