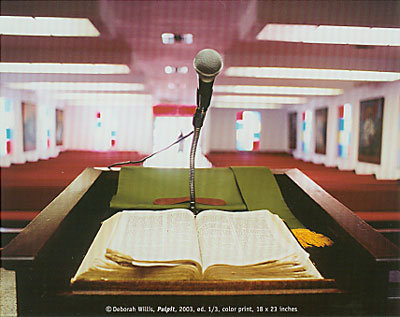 I think I’m squarely identifying myself as a Christian Universalist.  I am convinced that the basic tenets of Christianity provide a framework with which all can be reconciled back to the Deity in some form or fashion.  I’m sure most would disagree with this thought process, but I fully believe that all go to “heaven” and this idea of hell is some great machination still used to bring in tithes and offerings on Sunday mornings and to keep the masses placated.

I think the only thing that’s keeping me from being a humanist or an outright Unitarian Universalist is the fact that I just haven’t read up enough on it.  And yes, I still have my own embedded theologies that I wrestle with daily.

I think all of this is a great segue into this final in the miniseries on “This Is Why Folks Don’t Take Church Seriously.”  My friend The Critical Cleric mused to me once in the dorms that it needs to be time out for “recreational preaching” as he saw it from many of our colleagues.  Fact of the matter is that at our age, late teens and early twenties, many young men (why because this is still a male dominated industry) are all about “getting a preachin’ gig Doc” and its really just…well…recreation.

Even not them, but when I see stuff like this on YouTube, I’m ready to cry because these folks just don’t get it–the preacher included.

I just think it’s totally laughable that Pastor Leroy Thompson has made it such that a Christians biggest problem is that we’re broke, LOL.  But, my aught isn’t just with these prosperity preachers, but with our solid run of the mill preachers that we love and keep near and dear to our hearts.  I mean, it isn’t hard to cast dispersion on someone who trudges through money like a maniac and watching congregants run up to the altar tossing money at their feet.  But take the great Pastor Marvin Winans and the close of his sermon.

Granted I think Winans truly believes this, this post has nothing to do with him specifically, I don’t want this blog to be one that calls preachers out for whatever reason.  I’d encourage you if you have time to listen to the whole sermon on YouTube to get the full context, but I’m more interested in the content of what he’s preaching because fact of the matter is that this sermon is considered “good solid preaching.”  It’s just too safe for me.

I mean, when Winans starts condemning college education, and that he’s not interested in an ecumenical gospel and Christian yoga?!?!!?  I mean, the plethora of problems wrong with that would require a post unto itself.

Honestly, in my opinion, if you’re sermons aren’t drawing the attention of someone in some way, I daresay your sermons are safe.  The fact that everyone was on board with the content of this sermons lets me know that nothing about this sermon challenged the belief of the listeners.  To be fair, without getting to muddled in homiletic theory, some sermons are supposed to shore up the faith and belief of the listeners and I’m sure this one falls in this category.  But again, people out in the streets are dying.

And on a side note, I just like hearing Marvin Winans in his close.  The joker can saaaaaaang, lol.

So, as much as my readers probably don’t vibe with him, I could listen to Jesse Jackson all day as far as sermon material at Operation P.U.S.H. on Saturday mornings.  Granted his sermons are rooted in the civil rights era, his content focuses on health care for all and civil rights equality.  This goes on every Saturday morning, but too many of us-folk ask where is Jesse Jackson when something happens–he’s been in the same spot the whole time, but mainstream media doesn’t cover it.  I think the reason why is because actual people are dying and we don’t care.

We live in a society where my own father after working for forty years is going to have to pay for healthcare for him and my mother because of retirement, and we get up on Sunday morning and hear sermons about how “Jesus is going to work it out.”  Well, personally, I think it’s all a game.  Too often what gets preached in churches on Sunday morning amounts to nothing more than “pure existential psychological comfort.”

Where I don’t fully believe that we were born tabula rasa, much of what we believe as far as Christian beliefs and systems and mores and standards are as a result of what was indoctrinated with in us.  When it came to all things ecclesiastically related, most of us were taught to not question.  Even the basic questions such as “Who did Adam an Eve’s children have sex with to have children?”  Well, since we don’t teach incest, we simply say “Don’t question the Bible” or even “Don’t question Miss _______” who’s the Sunday School teacher and risk getting a whoopin’ from mama cuz the teacher told on us.  Whereas a simple “I don’t know” would have sufficed or even better, maybe we could have used our brains and postulated that the writer simply wasn’t interested in telling the story of other people, just Adam and Eve.  Why?  Because that would leave the possibility that life existed outside of the Bible.

Personally, and apparently I’m alone on this one, I’m all for getting rid of the Bible.

But I just think it gets in the way of God.  Our human lives are enough of a sacred text from which to teach and preach about our relationship with the Deity and this Jesus fellow.  Does this mean that I’m not going to preach from the Bible?  No, because I want my check after the service is done (yes, I need to eat myself) but, I’d be much more happy to preach from a few Dr. Seuss books I’ve read such as Horton Hears a Who and I Had Trouble in Getting to Solla Sollew.

Some preachers don’t believe politics belong in the pulpit and neither do many churches.  I still haven’t figured out why–folks are dying on our streets.  If it was only 2007 that National Baptist Convention USA mentioned HIV/AIDS for the first time, because too often we want to shift the focus on Jesus and absolve ourselves of any responsibility, then as far as I’m concerned we have too many recreational preacher in the pulpit who are playing with folks minds.

In church, we’re not taught to think.

Just think about it.  The entire structure of church, albeit participatory, doesn’t engage critical thinking.  We teach critical thinking everywhere else in society; in the realm of politics and most certainly in the academy but not inside the church structure.  As far as Sunday morning is concerned it’s all about receiving something–the congregation is expected to be receptive listeners.  The only thing they’re truly asked to give is money in the offering plates.   Some may argue that they ask of one’s time and talents, but I think this is negligible compared to what we’re asked to be receptive to otherwise.

The Wednesday night Bible study structure I’m sure was initially designed to be that question and answer period where people could get down to the real nitty gritty of the various scriptures, but now too often our churches have turned them into mid-week services which further alienates the mind from the person.

This makes the preachers job all the more tantamount.  The best I’d heard from one of my homiletics professors was that preachers “inform the consciousness” of their congregations.  We will take the word of the preacher over everyone else.  We’ll take it without it being force fed to us, and run around as though we have the special key to life.  Seriously, I’ve yet to meet a parishioner who doesn’t defend their pastor to the very end.

Here’s my most used quote from What’s Wrong With Obamamania? by Ricky Jones

Unfortunately black ministers (be they emancipators or collaborators in oppression) are often protected from secular intellectual confrontation by the almost certain ire of their flocks, which is heaped upon any critic who questions their leaders decisions and /or motivations.” [Emphasis added]

Sadly, too often preachers are informing the consciousness of their parishioners, with–may I be direct–plain ol’ bullshit.  Seriously, people are dying in the streets daily, and we stand by and do nothing.  I mean, I don’t know how much more serious does the situation have to get before we understand that people are dying and we stand by.

I closed one blog this way, and my fellow seminarian friend understood the metaphor, but his Pentecostal roots kicked in and didn’t quite deal with the criticism, but I think it’s equally appropriate:

I believe that we’re no more like the people in the story surrounding the crucifixion of Jesus.  We stand by and support legalized killings daily and we do nothing.  The people that stood by and watched an innocent man be lynched and tortured on a Roman cross were no less the same people who had watched the dozens of others who had run afoul of the empire of Rome and found themselves on the receiving end of torture from sadistic Roman centurions.  And they stood by.

Shame on me for not helping.

Shame on us for not getting up and walking out of churches that do nothing but enrich the coffers of the pastors for no other reason than him being the pastor.  Shame on us for not using the critical thinking skills that were created within us, and leaving our minds at the door for the sake of a community that fails to call its own practices into question.  Shame on us for not opening our doors to everyone at the church, for condemning gays and lesbians, for not letting women into the pulpit.  Shame on us for practicing blatant patriarchy in the name of one who we say believes that we are “all one in Jesus Christ.”

Shame on us for standing by day in and day out and doing nothing.

Where did I get all of this from?  This uppityness, daresay it revolutionary maybe even militant spirit from?  Most certainly and primarily I grew up in a household where it wasn’t suppressed, but honestly, for me I watched “The Road To Freedom: The Vernon Johns Story” and I’ve quoted the man a few times here in this blog.  But, most certainly the piece I’m talking about is from minute 1:38 and forward.

Johns’ questions he raises to his congregations echoes the sentiments of DuBois’ that as the Talented Tenth we have a responsibility to sacrifice for the common good.  Seriously, how many of us are willing to literally die for what we believe?  How many of us will see a good fight and get in it?  Or will we just stand by.

Seriously, I hope that those who read this really take it to heart.  I pray sincerely that those of you who go to church go back thinking a bit differently than you did last Sunday.  I hope you check the platitudes at the door and seriously and earnestly question them; question the song lyrics that you’ve sung ever since you were a kid; seriously digest what the preacher says in the pulpit and is it truly applicable to your life or have you really just not understood any of this ish since you can remember.

We have a responsibility to each other as humans–why, because literally, folks are dying.

I look forward to your comments of course.  Don’t forget to say something good!