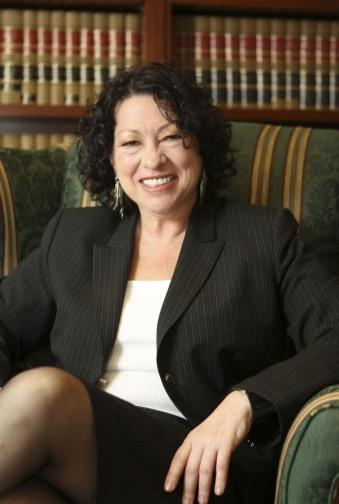 Now it sounded good when the name Leah Ward Sears was being thrown around for a possible nomination as Supreme Court Justice to replace retiring Justice David Souter, but I must say that I am definitely proud to see Sonia Sotomayor receive the nomination from the current President toward the Supreme Court of the United States.  Perhaps Sears’ main downfall was her friendship/relationship with good ol’ Justice Clarence Thomas.

If nothing else, I believe that this is the right time for her.  Granted I think the present is the best time for anything, but this most certainly is the best time politically for her to have her nomination.  With a near super-majority in the U.S. Senate confirmations should be nothing short of a breeze.  It’s actually lovely to see the Right in such a political tizzy over her because it’s not much that they can do about her.  Because when this Grand Ol’ Party of older white men would get to complaining they’d come off as anti-woman and anti-Latina which is not a good look for their party–ever.

But, I hope that this doesn’t act as a “handout” to Hispanics and Latinos in this country.  Much like the presidency of Barack Obama shouldn’t act as merely a notch to fill a quota for non-whites in political positions.  When Latinos only make up 6% of Congressional seats with 15% of the population or even with African Americans at 12% of the population and only having 8% of Congressional representation with both populaces having only one representative in the U.S. Senate.  The fact that one reporter asked some Latino students at Sotomayor’s former high school in the South Bronx as to “do you want more” with regards to seeing more Latino’s wield political power may have just been a regular journalistic question, but no doubt rings true for how I’m sure many white Americans may feel about the changing face of this country.

I wonder now what the uber-Conservative, underground trash talk will sound like now.  At first it was that the “damn niggers we’re takin’ over” and “thinkin’ that they own shit” in this country.  I’m sure no doubt we’ll hear the whole immigration debate flare up again because Sotomayor is the daughter of Puerto Rican immigrants and even though Puerto Rico has nothing to do with Mexico and the border, I’m sure someone over in FoxNews-land will make some correlation and I can only imagine what Rush Limbaugh is about to crank out now.

Apparently, the Right is using this term “judicial activist” which amounts to nothing more than code word for “liberal judge who doesn’t rule in our favor” to describe Sotomayor.  Specifically citing this very recent case which got some play by mainstream media, but it was much like the swine-flu media coverage, a few days and now no one remembers it.  In New Haven, Connecticut, home to Yale University, white firemen filed a lawsuit when their firefighters test had been thrown out by the city because no blacks had passed the test and in previous years had been able to do so.  They sued and appealed and Sotomayor was on the appeals bench and upheld the ruling under the 1964 Civil Rights Act, siding with the city.  It’s currently in front of the Supreme Court of the U.S. awaiting a decision.

The Right and other Republicans and conservatives are alleging her bias based on race and gender.

That’s such a specious argument, I wonder if it’s even worth the time of debunking.  Seriously, who doesn’t bring their own bias’ of race and gender to any deliberation session be it as a judge or not?  I mean are they seriously trying to say that Sotomayor is more biased than Samuel Alito or that bastion of conservatism John Roberts.

Though Obama said he was looking for a nominee who demonstrates empathy and a “common touch,” some critics have cautioned against such criteria in a high court justice and issued reminders that the law must come first.

“Judge Sotomayor will need to reassure the country that she will set aside her biases, uphold the rule of law and interpret the Constitution as written, not as she believes it should have been written,” said Smith, who will have no vote in the matter, as the confirmation is a Senate matter.

Perhaps Sotomayor’s most controversial decision was in Ricci v. DeStefano, in which she was part of a panel ruling against a group of white firefighters in New Haven, Conn. — they objected after the city threw out the results of a promotion test because too many white firefighters, and not enough minority firefighters, scored high.

She and two other judges summarily dismissed the case without tackling the complex issues outlined in stacks of briefs and debated in extended oral arguments. Instead, the court issued an unsigned, one-paragraph opinion. Sotomayor’s colleague, Judge Jose Cabranes, was so concerned that he wrote a lengthy dissent highlighting what many saw as an attempt to bury the case.

“This perfunctory disposition rests uneasily with the weighty issues presented by this appeal,” he wrote.

This type of biased reporting does nothing but twist and manipulate the mindless psyches of those who actually listen to the garbage that FoxNews reports on and calls is news.  Sotomayor isn’t some flaming liberal of the Al Franken sort, hell she got a former appointment to the U.S. District Court of the Southern District of New York by George H.W. Bush, but if anything she’s appearing to be middle-of-the-road and merely is calling a spade a spade as she sees it.  This same article goes on to say:

In 1993, Sotomayor threw out evidence obtained by police in a drug case, because a detective lied to obtain the search warrant — prosecutors agreed to a plea bargain. However, during sentencing Sotomayor made controversial statements by criticizing the five-year mandatory sentence, calling it an “abomination” that the defendant did not deserve.

Sen. Jeff Sessions, R-Ala., later grilled her on this, suggesting it showed disrespect for the law, during her confirmation hearing a decade ago for the 2nd Circuit Court of Appeals.

Sessions was one of 11 sitting Republican senators who voted against her at the time. Now the ranking Republican on the Senate Judiciary Committee, Sessions on Tuesday said Sotomayor would get a “fair and respectful hearing.”

But he said some conservatives who voted against her a decade ago felt she had a “history of activism.”

“I think she needs to address that,” Sessions told FOX News. “I think she’s entitled to a full and fair new evaluation.”

Sessions also released a written statement saying the Senate must determine whether Sotomayor understands that the “proper role of a judge is to act as a neutral umpire of the law, calling balls and strikes fairly without regard to one’s own personal preferences or political views.”

He’s from Alabama what do you expect.

Although she has made some rather liberal comments in the past:

I mean even she knew after she said it that it was one of those “DAMN!  Did I just say that out loud?”

Well, I’m a biased uppity Negro and personally I’m happy to see a Latina woman get the nomination.  I’m pretty sure that she’ll get through the Senate with no problems barring nothing magnanimous arises in her past that even Dems can’t turn a blind eye toward and just vote in her favor.  It’s been more than time to have a Latina on the Supreme Court.

Do you think Sotomayor is right for the job?  Does it make a difference about her being a woman or being Latina, or even being a Roman Catholic?  What do you think the Right is going to do to criticize her nomination?

9 thoughts on “Sharing The Wealth of Nations: Judge Sonia Sotomayor as First Latina to be Nominated to SCOTUS”