Skip to content
Posted on April 21, 2009 by the uppity negro 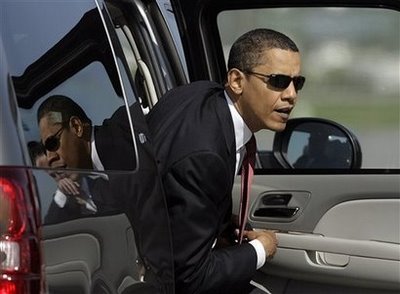 …or maybe his cohones decided to drop ever since they had shrunk from when Jesse Jackson had threatened to castrate President Barack Obama.

Or maybe he just passed the buck–as usual.

At least in the public eye, so far, the most decisive decision (I know that’s redundant) that Obama has done since being in office has been this stance with the Somalian pirates (and Bill O’Reilly is currently about to wonder if he’s decisive enough, but at least O’Reilly gave him kudos).  Perhaps some could argue his pushing of TARP through Congress, or the Gitmo stance he took immediately, nonetheless, I’m hoping that Obama does what is right in this whole Bush administration torturers.

In a brief press availability after his talks with King Abdullah of Jordan, President Obama left the door open to possible prosecution of Bush administration officials who drafted interrogation memos permitting practices like waterboarding.

“For those who carried out some of these operations within the four corners of legal opinions or guidance that had been provided from the White House, I do not think it’s appropriate for them to be prosecuted,” he told reporters.

But then Obama added that prosecutions for those who drafted the memos would be up to Attorney General Eric Holder. “With respect to those who formulated those legal decisions, I would say that that is going to be more of a decision for the Attorney General within the parameters of various laws, and I don’t want to prejudge that. I think that there are a host of very complicated issues involved there.”

Asked about his opinion of a congressional investigation into the matter, Obama refrained from taking a position — but maintained that such an investigation should be bipartisan if it happens. “As a general deal, I think that we should be looking forward and not backwards. I do worry about this getting so politicized that we cannot function effectively, and it hampers our ability to carry out critical national security operations.

It has been the long history of liberals to take this apologist stance toward conservatives.  Let’s take the whole Reconstruction from 1865-1877 when all Confederates were brought back into full communion with the already intact Union.  No Confederate citizen was forced to pay any amount of restitution, little if any served jail time, Robert Lee was not charged with treason….the list goes on and on ad infinitum.  We’ve seen this played out in the political arena time and time again where liberals don’t play the same as the conservatives.  In modern times, we see how the Republicans systematically killed all types of Clinton reforms and did so unashamedly.

So here comes Obama, and after a very trying eight years for Democrats and other self-professed liberals, there is actually something that can be concretized into a form of prosecution, and initially Obama, after releasing these “torture memos” says that he’s not going to push for persecution.

Before I give how I truly feel about Obama’s decision, I’d like to at least discuss this whole idea of torture.

In theory, and in theory alone (I believe) we need to redefine this idea of humanity: even the terrorists are human.  They may do horrific things as mere actions, but they still are or rather they still be humans.  On that basic level, that could be one of us getting tortured.  So, it raises the question, why should we regard them as humans when the reverse isn’t reciprocated; that is to say that the terrorists don’t see us as humans, so why should we?  Which of course engenders this Westernized thinking of “get them before they get us.”

Another problem that this poses is the idea of a human life.

We easily will say, here in America, that one life of an, let’s say, Iranian terrorist is worth the lives lost in any terror attack.  Where do we get off judging and valuing the lives of others?  It’s an age old question that has been around since the beginning of time where different nationalities place higher judgment on the lives of their own versus that of other ethnicities, cultures, and now different races.  As a result, rather than being united because of our differences, we are separated by our differences and negating our similarities altogether.

If I were an interrogations expert in the CIA or FBI would I actively participate in torture for the sake of American lives?

I think that’s one of those questions that you’ll only know what you’ll do when you’re put in that situation directly.  But, what I do know is that the law clearly is against various interrogation tactics because they are classified as torture.  Apparently Obama has left this door open for Attorney General Eric Holder to do with this what he wants.  I just hope the man does his….hmmmm, shall we say his uppity field Negro duties and not shirk his responsibility.

Do you think that the left overs from the Bush administration should be prosecuted for going against the law?  Or should we be looking toward the future and let that stay in the past?  Is this a sign of things to come–Obama being wishy-washy on an issue, or is this just Obama being his typical self with “cooler heads will prevail” mentality?  How do you feel about torture–is one being tortured worth the lives of our fellow citizens?

2 thoughts on “Obama Discovers Some Intestinal Fortitude; Leaves door open for Prosecution for Torture under the Bush administration”