Skip to content
Posted on March 26, 2009 by the uppity negro

It was a big deal the day he came, and fellow alumnus Nikki Giovanni was there along with all of the Board of Trustee’s. If my memory is correct, I do believe it was for Jubilee Day 2005.  If it wasn’t, forgive me for the error in my memory, and just to hear the man talk and to see him walking up to Jubilee Hall for the book signing was amazing.  He talked clearly and lucidly about his life story.

It was a great honor.

It also reminded me of the atmosphere that helped created Fisk.  Some schools lack a culture, such as my previous school prior to Fisk, Dillard University.  The legacy that was Dillard had fallen deaf on the ears of the students.  There was no school pride except when the Dillard-Xavier game was to be played.  There were failed attempts on behalf of the provost, but still the rapport between administration and students was so horrible, most students just did the best they could.  It took Hurricane Katrina for a majority of Dillard students to learn the school’s alma mater.

Not the case at Fisk. 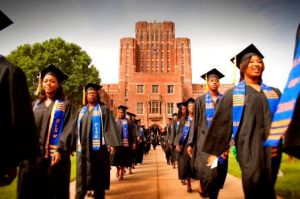 So on Jubilee Day 2005, that first Thursday of the month on the 5th of October, I remember sitting in the chapel on Fisk campus and seeing such the pride that all the students had for their school and the idea of “her sons and daughters ever on the altar” ringing triumphantly throughout the chapel, that I was fully unprepared for Fisk’s school song to be sung.  Everyone interlocks their arms and launches into a rousing chorus lead by the Fisk Jubilee Singers which were placed in the balcony for that day singing:

And by that time I was trying not to lose it, because all I could hear in my head was “Fair Dillard, gleaming white and spacious green, we love thy every blade and tree….”

Where e’er we be,
We shall still love thee
Fisk!  Our alma mater!

with such deep and dark tones, working the eight part harmony–

It just does something to your spirit!!

So, to the fellow Fisk alumnus who’s crossed that final river, you’re work has spoken for itself; what you did helped a people find their voice and you definitely made the difference, and you will ever be on the altar of Fisk University.

Ever on the altar,

Care to share those seminal HBCU stories that made you just swell with pride that you made the right decision to go to an HBCU, feel free to drop those stories down in the comment box below.