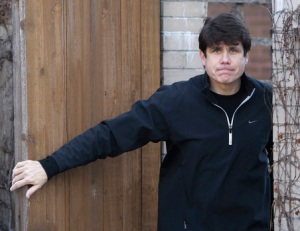 It is my understanding that a “complaint” was (PDF) filed with the district attorney’s office here in Illinois.  It was because of this “complaint” that he was arrested last week about this time.   At first, while I was in the midst of finals I didn’t give it much thought except that Gov. Rod Blagojevich was never on the list of top elected officials.  Honestly, what turned me off was the fact that his wife Patti Mell is the daughter of Chicago Ald. Richard “Dick” Mell who was part of the Block 37 who made the late Mayor Harrold Washington’s first administration hell on earth and is summarily a staunch supporter of Hizzoner Richard M. Daley.

For anyone who knows Chicago politics understand that this is a Democrat stronghold and Democrats out here are about as corrupt and crooked as I don’t know what.

That being said, even though Blago and his father-in-law don’t like each other, vehemently, I could care less; that was enough for me to vote against whomever the Republican candidate was and vote for whoever had the “D” by their name even if it was Blago.  As a result we have this current governor who apparently went on a “crime spree.”

What’s at issue for me is this idea of a “complaint” filed and then an arrest.  If I understand it correctly, Blago has not committed any crimes.  In fact, he’s merely talked about it and not unless intent to committ bribery is a crime, then I think this is a travesty of justice.  Moreover, as we delve into Illinois Chicago politics it becomes apparent to me that our Atty. Gen. Lisa Madigan is about as shameless as Rep. Jesse Jackson, Jr. when it comes to throwing their hat in the ring for this senatorial seat that was finally left vacant by President-elect Barack Obama.  Lisa Madigan is daughter of Illinois’ Speaker of the House Rep. Michael Madigan who as anyone knows is arch enemies with Blago and Senate president Sen. Emil Jones.  So, it was of no shock that last week Lisa Madigan was calling for the Supreme Court to step in and remove powers.

Well, we have a system set up for that and it’s called impeachment hearings; she of all people should know that.  But I guess the days are getting short till January and she still wants to have a fighting chance, especially knowing that this state is not about to have a special elections.  Honestly, she needs to be speaking on behalf of Blago’s habeas corpus rights possibly being infringed upon.  These proceedings seem indicative of some low-tech version of the movie “Minority Report” where the individuals were arrested before the crime was committed.

I was quite pleased to see that the state representative for my district, Rep. Barbara Flynn Currie  was quoted as saying that “this is not the old west” when it comes to proceedings, advocating a fair hearing for the governor.  It appears to me that the media has put the horse before the cart with Blago.  There’s no proof that he’s done anything wrong and I think that if he becomes impeached, which still is not a removal from office, would set a bad precedent for politics across the country, and of course for here in this state.

Is his political career over?  No, of course not this is Illinois Chicago at its finest.

Would I vote for him again? Well, at least not in the primaries, but if his name appears next to a “D” in the future, I most certainly will.

It’s a sad state of affairs when this is our reality as citizens in this country.  Where Jesse, Jr. who was “candidate number 5” meaning that he wasn’t going to get the job anyways (at least at number two or three spot you have a chance, and perhaps can orchestrate a way to move up, but five, come on Jesse!), gives a campaign speech at his first press conference on this issue, and then to hear Lisa Madigan attempt to circumnavigate an actual process that works called impeachment.

Now, what irritates me is how the Republicans are salivating in the wait on this one.

I don’t blame them–necessarily.  No appointee in their right mind would accept a nomination by Blago right now as his public image is wrecked at this moment, but with him having the sole authority of U.S. Senate appointees is leaves Illinoisians possibly being underrepresented in the Senate come January.  I learned that lesson in undergrad; granted that politicians have done some dirty things, I’m not in favor of removing one from office because it leads to an underrepresented electorate.  The Republicans would love to get a Republican in here if we had a special election.

Also, what I don’t like is that every single conservative minded news pundit has been postulating how Obama may be connected to it as though they want the praise for having predicted right just how Obama is really tainted.  Of course at top of the list is Sean Hannity.  I caught his radio show driving back from Atlanta yesterday and I heard him go on and on about how Obama has something to hide because he’s not releasing information about his connections to Blago until next week–Christmas week.  Hannity was going on and on about how whatever it is will be buried in the news because of Christmas and how Obama was doing this on purpose etcetera, etecetera.  What incenses me about blowhards like Hannity is how adept they are at dissemination of bad information and moreover how they stick to their guns even when challenged.  A caller told him that it was U.S. Atty. Patrick Fitzgerald who told Obama to not release information until next week.  The same guy Hannity had been praising for going so strongly after Blago.

So by Blago staying in office he’s kind of thumbing his nose at everyone because he’s forcing everyone to scramble around when it seems as though he actually has the law on his side.  If at the end of the day he sues–whomever for whatever–and this goes to court, not unless solid evidence comes out against him, I don’t see how he could lose.

As a result, Rod Blagojevich is a recepient of the coveted UNN “I aint Hatin'” Award

Go for it Mr. Governor.

What is your take on the whole “pay to play” alleging?  Does it not seem that Lisa Madigan, Jesse Jr., and Lieutenant Gov. Pat Quinn have more to gain in calling for Blago’s resignation than anyone else or am I the only one who realises that?  Do you think Illinois should take money we don’t have and call a special election?  What should ultimately happen to all of the people involved in this?