Especially since this summer, anyone who has been around me knows what two kinds of cars I want.  First of all I drive a 2001 Chrysler Concorde right now.  When I got down to ATL my friends, well Supreme Uppity nick named it “The Cruise Ship” or “The Boat.”

I remembered when we got like 10 inches of snow back last December how I really wasn’t all that worried about getting stuck on Chicago’s unplowed side streets.

What I really wanted was a Chrysler 300 prior to the 2004 models.  It was just something about ’em, but I just didn’t want to pay for the one’s I saw, so I went with the Concorde–which has served me wonderfully!

Then 2006 came and Dodge dropped the Charger.

Well, this was a throwback to the old two door muscle car Charger manufactured by Dodge in the 60’s and it just screamed muscle car.  It had been a while since on production level had the American public seen something like it.  And the marketing tools worked for the Chrysler company.  The 300 was regarded as the ‘Hood Bentley and the Charger just gave you plain ol’ hood status.

Slowly my love for the Charger grew.  Ya know, everytime I would go to the dealership with my dad to get one of our cars fixed, we’d always go and check out the new cars.  The Charger just always felt right.  So this summer, believe it or not, one of the kids shared my affinity for the Charger and ever since I’ve been on Charger watch. 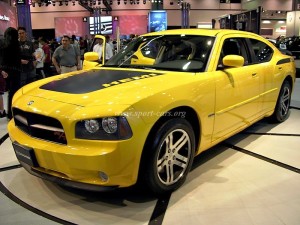 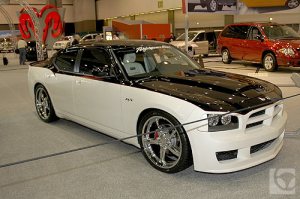 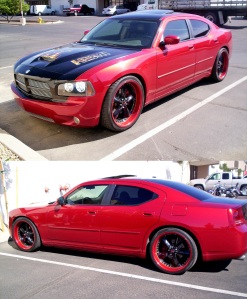 So, this summer when I was back home, I had walked up to that wonderful Chicago establishment Pepe’s on 53rd Street and I was just mentioning to Uppity Friend that I wanted a Dodge Charger and she asked why–and my answer was “So I could have ‘hood status.”

Well, for those of you that have read her guest blogs, then you know how she responded.

I didn’t really have a long answer prepared, but I was quite clear that aside from the aesthetic appeal, I wanted that car for hood status.

Well why, pray tell, would an uppity Negro want ‘hood status, of all things?

There is a fine line between uppityness and elitism.  There are times when I can be quite the elitist, but it’s something that leaves a bad taste in my mouth.  I think it screams elitism when you go to IHOP or Applebee’s and you expect the same service you get from Houston’s.  I almost cringed when I went to Bar Louie’s with Uppity Negress and she didn’t want to tip the server because “he took too long.”  It wasn’t like we were in a rush and I convinced her finally to leave a tip.

In my own twisted world I want to be able to still be on level with people who don’t have a college degree and who aren’t in a dual masters degree program.  Ya know, I heard my pastor talk about growing up poor and as I got older I just rolled my eyes at the notion.  I’m not saying that they didn’t struggle at times–but being the son of a minister in an inner city church, and coming from a family where both sets of grandparents had college degrees prior to 1940 does not constitute poor.

Poor is my mother, who’s mother came up on the train from country Mississippi in 1949 with three kids and pregnant with the fourth, moved into Altgeld Gardens on the South Side and lived with two other WHOLE families and then moved to the West Side on 16th and Christiana until she was seven and then grew up in Ida B. Wells.  That’s poor.  Even my dad recognises that in some respect he had it better down south simply because his parents owned their house and somehow sent ALL five of their kids to private Catholic school.

No, trust me, I’m not bemoaning the fact that my parents felt it special enough to drive to Anchorage, Alaska and back and further solidifying an uppity Negro experience, but I just want to be able to have a conversation with some of my friends and not have them think that I think that I’m better than them because I went to car-ledge (**in my best Madea accent**).

There exists this age old tension between the have and the have-nots, the privileged and the under-privileged and daresay, the unprivileged.  Uppity Friend, along with another friend I mentioned it to, engaged unapologetically, their DuBosian ideals of elitism and simply responded “Well, why would you want to be affirmed on their level?”

I’ve thought about it in many ways.  First, I think part of it really is me buying into the whole materialism of this world.  I mean, I read magazines like Vibe or Complex and I’ll pick up GQ from time to time and the magazine, as anyone knows is majority advertisements, and often fashion and car advertisements.  Clearly, from my post on yesterday, you can see that I am quite aware of fashion–may not be able to afford it, but meh, who cares, I want it.

Hood culture is heavily materialistic.  Some would argue over-materialistic and I would ask, over materialistic compared to what?  Most certainly not compared to this country where one’s wealth and value is placed on what they can buy?  The bigger the house, the better; the bigger the car, the better; the more clothes, shoes, cars, houses one has the better–just ask Sen. John McCain and his wife.  Truth be told, blacks are still the ones a day late and a dollar short on the whole materialism thing.  While whites in this country had since the early 1600’s to lay the foundation for their wealth on this continent, we’ve only had 143 years.

The difference is that blacks just always were more flamboyant with our material possessions, we just want everyone to make sure that they know that we have more.  Even though whites buy and drive Chargers, you’d almost never see a 30 year old white guy driving one of those cars up above–but go into any ‘hood in America you’ll see a 30 year old black dude driving it, with a sick paint job and rims to match it.

I said all that to say that, it all boils down to I want someone to look at me when I drive through the neighborhood.  I want the status attached to it.  I want to be a head-turner.  I want people to look and talk about me.  I want to get props for having a Charger.

Secondly, I really think it’s because of the attention that I would get for it that it would keep me on level with some of my friends.

I’ve read many articles and stories about the black kids that get teased for “acting white” because they they did well in school or talked with proper diction and pronunciation and enunciation of their words.  While I did get teased for that in high school, it wasn’t merciless and it wasn’t to the point at all where I let my grades slip.  What I’m afraid of is being labeled one of those “I have arrived” Negroes.

You know who I’m talking about, those, somewhat like my pastor, who has somehow forgotten in the weirdest of ways where they came from.  Those are the ones where there is a disconnect between them and, how shall I say “the common people.”  I don’t mean “common people” as a put down, but for lack of a better term, I want to get my point across.

Okay, I really got into this one.  I’m quite sure that I’m going to do a part two on this one tomorrow.  Question:  Do you really think that the uppityness versus elitism really exists?  How does one go about maintaining relationships from the past–particularly when you don’t want to come off as condescending in conversation.