This CNN special blew up bigger than they expected.  I’m quite sure.  I don’t know what to really say, I’ve heard both sides of the argument as far as how effective the special was.  But, guess what, I haven’t seen it in its entirety.  I fully saw the Essence/CNN panel last week, and I thought it was weak except for Cornel West and Julianne Malveaux, but these two never fail to deliver.

If I can go off on a tangent, one I’ve been dying to in a while: why is it that many blacks think that Michael Eric Dyson, Cornel West, Tavis Smiley, Roland Martin, Marc Lamont Hill to name a few need to be quiet–not to mention Revs. Al Sharpton and Jesse Jackson.

Until the day black people own a media outlet that produces quality programming for black viewers (hopefully TvOne is headed in that direction; Lord only knows what direction BET is headed) then I all for black individuals that challenge traditional thoughts concerning race, religion and politics in this country.

Even some of my fellow bloggers, of whom I still respect, think that Dyson is just too much.  One told me he uses too many big words–and this was from someone who was college educated.  Well, okay, perhaps Dyson should be a bit more aware of his audiences, but how can we decry uneducated youth, but we don’t challenge the youth to be educated?  Our community response to Dyson is, “Don’t use big words”  what’s wrong with telling the kids to go look up the word in the dictionary and expand their vocabulary or taking the time to teach about context clues?

Another blogger informed me that they read one of his books but they weren’t all that impressed.  Now, I don’t know which book it was, but I just finished reading Come Hell or High Water and Is Bill Cosby Right? and I thought the books were a breath of fresh air compared to the warmed-over, stale analysis of most things pop culture.  Even if you don’t agree with the guy, you gotta give him credit for an intelligent critique of two watershed marks in black culture.  I would love for him to take on the Jeremiah Wright controversy as one of his book topics.

This is not to defame these fellow bloggers or to even suggest that they are anti-intelligence, but I just wonder what is it about these people that have gotten under many black people’s skin.  Is it that black folk simply don’t pick up books written by these people and allow MSM as the only source from which to draw opinions?  Is it simply how MSM has portrayed these people?  Do many blacks have fundamental disagreements with him?  Is it that Dyson simply talks too fast?  Or is it that we as black folk are comfortable in our collective confusions?

What I don’t get is that everytime someone disagrees with someone else, then they’re labeled a hater.  Jesse Jackson disagrees with Barack Obama on his relationship with the black community–he’s labeled a hater.  Personally, I agreed with Jesse Jackson, not on the castration part, and my friend told me I was “just hatin.'”  So, am I hatin’ now because I disagree with those who think that those Popes of Blackness I listed above should be quiet, but I think that they should feel free to continue speaking as they are.

If a reader can tell me two black individual who has a network evening news show (ABC, NBC, CBS) or a cable news show (CNN, FoxNews, MSNBC) then I’ll be glad to retract my statement.  Or name me five black pundits, and the pundits are defined as individuals called to sit on Sunday morning shows or those asked to go tete-a-tete with others of polarizing viewpoints.

I guess that’s the end of my tangent.

My problem with these “specials” is that it divides community reactions.   There are those who apparently felt that it focused too heavily on “ghetto” living, when despite numbers in the black community being disproportionately high, the majority of blacks don’t live in ghettoes.  There are those who felt that the special rang hollow because there was not a segment devoted specifically to the black church, just mere mentions of church.  There were also those who felt that they focused to heavily on the black male and all the ills that accompany black men: prison numbers versus college enrollment; unwed fathers versus plain ol’ absentee fathers, without taking into account that it “takes two to tango” and completely victimizing the role of the black woman, almost at the expense of the black man.

Well, all that really proves is that we’re not a monolithic community (although for some reason when it comes to presidential elections, around 90% of us, give or take a perecentage point up or down, always vote for the Democratic candidate in recent election years).

For me that proves my reasoning that this should not have been crammed into two-days.  The achievements and failures of the black community should not and can not be relegated to a two day special with an average panel as the lead-in the week before.  I am simply insulted.  I feel that my blackness was only worth two days to a major network.  Clearly I’m pissed because essentially I’m writing the same feelings as I did prior to Wednesday night’s first segment.

I would have rather Soledad say, either a week or no deal, but I’m pretty sure like another friend of mine (who hasn’t demostrated that he is the most politically astute) or the lady who called Big Tig this afternoon said “well we have to start somewhere.”   That sounded like the most steppin fetchit bamboozled crap I’d heard in a long time, and this was from someone who taught in DC public schools for some 20 years.   What did she mean “we have to start somewhere?”  We been starting since 1865!!  Hell, the finish line should be in view by this point in the journey.

I’m sick and damn tired of okey-doke Negroes who are just happy for a bone thrown from massa’s table.  Dammit, I think I’ve earned the privilege to sit at the table and are entitled to a full course meal!

Okey-doke Negroes who are merely happy with doing something here and there, appeasing themselves and patting themselves on the back with some minor contribution to society.  Roland Martin got to hollering on Campbell Brown’s show about “how we still have a long way to go” and that it’s time for “action.”  It was kind of nice to see a bit more passion behind Martin’s usual jeremiads. 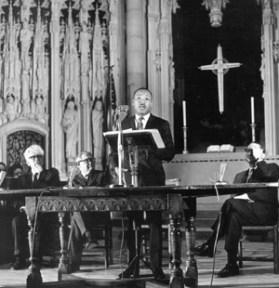 At this point in the journey, we’ve discussed about as much as can be discussed; we’ve had enough prayer breakfasts; we’ve had more than enough townhall meetings; we’ve had enough randomly assembled panels.  Essentially, we’ve done the traditional thing, so let’s try something new and actually do something.  I think Martin Luther King’s assesment of the Good Samaritan on the Jericho Road in his April 4, 1967 speech at the Riverside Church is approriate:

A true revolution of values will soon cause us to question the fairness and justice of many of our past and present policies. On the one hand, we are called to play the Good Samaritan on life’s roadside, but that will be only an initial act. One day we must come to see that the whole Jericho road must be transformed so that men and women will not be constantly beaten and robbed as they make their journey on life’s highway. True compassion is more than flinging a coin to a beggar. It comes to see that an edifice which produces beggars needs restructuring.

But, see, this is the hard part.

It was easy for the teacher to call in to WPGC this afternoon and go off on Big Tig for falling asleep on Thursday night’s segment on Black in America because he said “it wasn’t intriguing.”  He said usually things that are intriguing hold his interest.  Now, I don’t know what background Tig has, he doesn’t scream to me of being some bastion of blackness, but how he said that it wasn’t intriguing came off to me as him trying to get around saying that the show was some BS and really didn’t amount to anything.  I didn’t get the impression that this was some bootleg ig’nant comment like Yung Berg’s comments about light skinned women and the “pool test” or the general ignorance that David Banner displayed on Hip-Hop Vs. America, Pt. 2 and somehow resurrected from some long deceased Uncle Tom of years past, but rather that this special amounted to nothing more than, as AverageBro said, intellectual masturbation.

I don’t even think it was worthy of that.

Well, comments are what makes blogging interesting.  So if you have taken the time to read this article, I would REALLYappreciate it if you left a comment.  It would provide the opportunity to open dialogue between other readers.  Yeah, go ahead, take the five minutes and write down how you feel, and get it off your chest.  Even if you disagree with everything I said, I’d love to hear from you.  Annnnnd, if it sounds like I’m begging, I am.

13 thoughts on “In the Midst of Being ‘Black in America’”