An alternate title for this article would be: 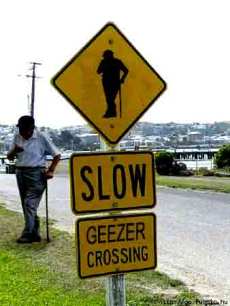 Could you imagine an old white man, geezer if you will, wearing a red and black plaid checkered shirt, and army green pants held up by suspenders, shuffling with an old wooden cane as a result of his hip surgery four years ago.  He gets into the voting booth, and pulls out his reading glasses to look at the ballot and then lets out a frightened “I be damned!” Clutching his right shoulder, he says “I gotta pick between a wo-man and a nigger!”  And collapses to the floor.

Well, that’s true hyperbole, and I’m just doing my Onionspiel if I had to write for them.  However, I think it’s interesting that 7% of West Virginia voters cast their vote for John Edwards.  Wth!?!?!?!?  So, clearly, both of these candidates have to deal with race as an issue.

A Civil War?  Nah, I don’t think it’s going to be quite that serious, but, um, we are definitely a country divided by race.  Just ask Joshua Packwood, Morehouse valedictorian.  Well, if that name doesn’t ring a bell, just walk down the streets of rural West Virginia or Pennsylvania and I’m sure one would see just how bad it is.  Where pollsters were being told to “Hang that darky from a tree!”

And these were northerners in Pennsylvania.

And yet again, race rears its ugly head in the best way it knows how, right under the surface.  And I’m convinced that some older white voters have simply refused to listen critically to what Obama has to say.  Hell, how many of us, aside from political pundits, critically listen to speeches given by these candidates in their entirety?  I know I really don’t, but I’m not going around saying either candidate “isn’t saying anything” or that “all they talk about is change without any substance.”  I’m saying all this to say, I was watching the news and to the effect, and older white guy, who very much fit the description of the hypothetical individual at the opening paragraph who was having a heart attack, said in a wonderful Appalachian drawl “I’m not voting for him, because he’s a Muslim–Oh-bamma.”

I know a southern accent dictates the mispronunciation of some words, but to watch that clip actually made me laugh out loud at the wanton ignorance that individual displayed.

In a weird way, and only at the human level that I share with men who would dare make such a statement, I feel sorry for men like that.  Granted people who think like that are not in the majority, they do exist and moreover they do vote.  What are we as a country supposed to do to bring these people into full knowledge about this country.  I mean, that guy sounds like a left-over relic who would remember stories from his grandfather about “them darkies” just roaming around after slavery ended when he was little boy.  Steeped in this truly racist ideal, what is he or they supposed to do when faced with a candidate who very well may DIE (yes McCain would be 72 if elected and sworn in) and that of a woman and a black man.

We make this claim that Obama has transcended race, and we are lying to ourselves.  We make it seem as if it’s only blacks who are baiting the race issue, but again, if that’s the place then Obama polling places in Pennsylvania wouldn’t have been vandalized with bigoted words spraypainted: “Hamas votes for BHO.”  Or even pollsters wouldn’t have been told that

Be that as it may.  We still have a long way to go in this country.  Many people keep telling blacks to get over race, but yet and still its rural white folks in places like West Virginia and Pennsylvania who commit these random acts, such as shouting racial epithets at pollsters for Obama of both races.  As I’ve already stated, 50% of my reason for having endorsed Obama at the beginning was because of his race–I’ve had my chances to vote for white presidents before, now it’s my turn to vote for a black one.

Keep it uppity, and keep it truthfully radical, JLL