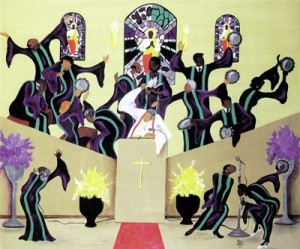 I grew up hearing the phrase “speak truth to power” and its derivatives namely from the pulpit and from my mother.  It was always used as a justification for preaching social justice sermons or putting forth a social justice message; usually in the face of a prosperity gospel preached (such as in the Word of Faith churches).

Now let me be crystal clear, I fall clearly in step with those who preach a social justice message.  But my friend asked me to define what a social justice message was and I very quickly rattled off the first thing that comes to mind and it was “speaking truth to power.”  Being blessed to have such an inquisitive friend, he simply asked “What does that mean?” –and I was speechless.

Has the part of the Black Church that has consistently preached and taught the messages of social justice gotten no better than those that preach a prosperity gospel?  Have we not monikered our own catch phrase of “speaking truth to power” that has surely gained popularity in the wake of the Jeremiah Wright controversy?

Many people use the Hebrew Bible examples of the prophets such as Jeremiah, Isaiah and particularly in the Jeremiah Wright issue, the prophet Elijah as he butted heads with the government in the form of Jezebel (who was not a whore as the writer of Revelation so eloquently opined) in 1 Kings chapter 21.  Or use the proclamations that are found in Jeremiah or Isaiah as a foundation for a social justice platform.  Well, I guess there’s nothing inherently wrong with that, but again, as Christians we live in a post-resurrection era, how does one reconcile an Old Testament hermeneutic in a New Testament world?

The other problem that my friend spurred my mind into pondering is really about this phrase “speaking truth to power” and of course the natural question is what is truth?  Clearly it’s quite objective because those who subscrbie to a prosperity gospel believe that those who preach a social justice marriage have their priorities mixed up, and vice-versa.  Another question that I ask is as to whether or not truth needs to be brought to power?   And if I can totally be devil’s advocate, is speaking the best way of achieving it?

I’m quite sure that there is a division that still exists amongst black churches with some that will use Jeremiah Wright as an example as reasons why one should not speak so loudly, or so vehemently or else you’ll end up with people remembering you for the wrong reasons.  Others who tip-toe around the fray of things lest they get their hands dirty know that a social justice message should be preached form their pulpit, yet and still they know that it doesn’t necessarily pay the bills or their salary.  Or others that clearly feel that social justice is not priority number one for black people in this country.

So, where do we go from here because I would go out on a limb and say that many who have preached a social justice message now feel even more emboldened to go forth “speaking truth to power.”  Even here on campus, Jeremiah Wright’s name has been brought up so many times, I’m quite tired of hearing it.  There’s even a panel (albeit EXTREMELY late in the whole issue) on ITC’s campus on Monday at 6pm and I’m seriously considering skipping it just because I’m quite tired of the whole situation.  In my preaching classes, I heard sermons that have included Jeremiah Wright’s name and even two sermons clearly about social justice one entitled “Two Wrongs Don’t Make a Wright”  (which was horrible, and he should have just kept it on his manuscript.  I mean he started hooping by his second paragraph in B-natural–B-NATURAL!!!!) and the other one was simply entitled “Speaking Truth To Power” both using Hebrew Bible scriptural references.

Even though I’m clearly rambling, my whole point in a nutshell is to admonish those of us who believe in a social justice message to stop running around saying “speaking truth to power” as though you’ve said a mouthful and most of us would be hard pressed to really define the phrase “speaking truth to power” other than throwing it off on social justice preaching.  Somehow, I can just see it becoming yet another fad in the wider scheme of things and I’m afraid for the black community if we make a “fad” out of the tradition that Jeremiah Wright et. al. stood and still stand in and we really negate the ultimate tradition of it all.

I needn’t shine the spotlight on the countless black preachers, namely from the modern civil rights era to present in order to make my point.  But please don’t diminish the power of social justice preaching by wantonly throwing around catchphrases like “speaking truth to power” as though you have a key card to the true nature of God, Jesus or the Holy Ghost over that of others who run around saying “Watch This!” or “Money Cometh Unto Me.”

From now on, let’s just keep in mind what we really mean when we say “speaking truth to power.”

Keep it uppity, and keep it radical, JLL

3 thoughts on “What Is ‘Speaking Truth to Power?’: Social Justice Gains Popularity”