Skip to content
Posted on December 3, 2007 by the uppity negro

I’ve yet to have weighed in on this issue and since I was scrolling my usual haunts online, I decided to provide this story.  This particular story does include my viewpoint of how I feel on the issue of sagging pants, but I can speak from my own 23-year-old self.  If I feel the need to somewhat sag my pants, then so what!  Personally, I don’t walk around with a wife-beater and my butt hanging out, but I do sag my pants to the point that if I’m sitting one may see my underwear or maybe when I stand up, if I don’t pull my shirt down one may see my boxer shorts.  So usually if someone makes a comment, I try and reserve myself and not say anything because I don’t have time to tell about my right and my preference to dress as I do.

Some once said that I must dress a certain way, meaning, I must dress the part of a grad student seriously pondering doctoral work.  Well, as far as I’m concerned, I feel I need to be more focused on my class work, not worried about what I have on.  Particularly, when I’m dressing for a 9 o’clock class on a Saturday morning–the fact that I’m there and awake is more than half the battle as far as I’m concerned.

The issue for me is a lot bigger than what clothes I have on; I’d rather see community leaders attack other issues where black youth are concerned.  Particularly in these predominantly black municipalities, we’d rather fine our youth and sentence them and possibly their parents to a misdemeanor–giving them a record and entering them into the system–just because some older people didn’t like what they wore and how they wore it?  This seems like black people are just looking for an easy out; expecting government to do what it has historically shown itself incapable of doing: that is adequately tending to the needs of the black community.

And while I’m on the subject, as a current resident of Atlanta, I’m quite put out by the media and who they chose to interview when it came to the news reports surrounding the issue of proposing a ban by Atlanta Coucilman C.T. Vivian.  It seemed that they found the most unintelligble young black men, and they showed them with their pants under their buttocks.  By in-large, the pants sagging that I witness on the university campus is not that extreme and you have people who just merely as a style of dress do this–AND THESE ARE EDUCATED STUDENTS.  Why couldn’t the reporters, who I’m sure had sons and nephews that they could have asked as far as what their take on the issue was, have went to the college campuses and interviewed the students at the AUC?  Which further makes me wonder, would this law be enacted on the campuses of Emory and Oglethorpe–white boys sag their pants as well.

And again, as a young person, I believe in respect of the elders of the community, however, how far are these old people, or an demographic for that matter, willing to go to protect their own sensitivity? 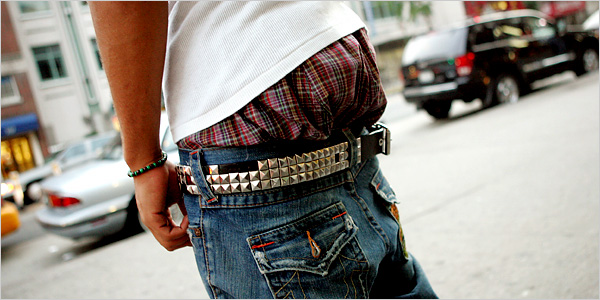 Saggy pants bans may not be lawful

ST. LOUIS – Call her old-fashioned, but Mary Gray doesn’t want too much access to other people’s underwear. “I’m from the old school,” Gray said of the saggy pants ban she helped enact last month in Pine Lawn, Mo. “You got to leave something for the imagination.”

Pine Lawn, a mostly black municipality outside St. Louis, is among a growing number of U.S. cities enacting laws that ban low-slung pants.

Critics say the bans amount to government attacks on youthful fashion that some find offensive. And constitutional scholars say they may not be lawful.

“People have a right to express their identity through speech and action,” said Neil Richards, a First Amendment expert at Washington University in St. Louis. “On the other hand, municipalities have a vague power to control the health, safety and welfare of citizens.

“The question is what is motivating these laws? … What is so threatening about it?”

Richards said the ordinances seem to single out a form of dress popular with young black men and hip-hop culture.

Saggy pants fashion is believed to have started in prisons, where inmates are issued ill-fitting jumpsuits but no belts to prevent hangings and beatings. The look was popularized in gangster rap videos.

Benjamin Chavis, the former executive director of the NAACP who now heads the Hip-Hop Summit Action Network, said in August his coalition would challenge the ordinances in court. He did not return several phone calls last week seeking an update.

Pine Lawn Mayor Sylvester Caldwell has said he began seriously contemplating the ban last summer, when developers discussed how the impoverished town could improve its image and boost its redevelopment potential.

“I look at the future of a person and their ability to get a decent job,” 72-year-old alderman James Brooks said. “It’s going to be pretty difficult if you’re not wearing your belt.”

Violators whose low-slung pants or low-rise jeans expose underwear or skin face up to a $100 fine, and their parents could be fined up to $500 fine or serve 90 days in jail.

A number of U.S. communities have passed or considered similar ordinances.

Officials in Stratford, Conn., rejected a ban on claims it would be unconstitutional and unfairly target minorities.

Two years ago, the Virginia Senate defeated a saggy pants ban passed by the House, but not before it became an international embarrassment, said David Hudson Jr., a legal scholar at the Nashville-based First Amendment Center.

He finds it bizarre that cities spend so much time regulating clothing.

“I’m not sure what it really serves,” Hudson said. “They should solve some real problems.”

“This is an arbitrary regulation that infringes on individual liberty,” he said. “Applying this outside of a public school environment is simply beyond the realm of proper government regulation.”

Robert Harris, a gang expert and consultant who worked for 20 years in federal prisons, said gang members often use saggy pants to conceal weapons and drugs.

“That’s a concern, but I don’t know how effective an ordinance would be,” he said. “It’s also a pretty big fashion thing among kids. There are thousands of teens who wear them who are not involved in criminal activity.”