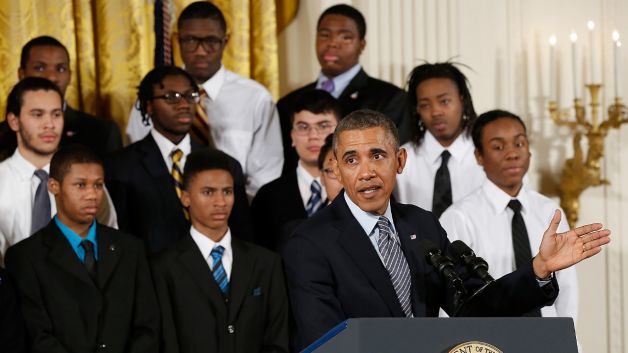 I didn’t have the pleasure of watching President Obama make the big reveal about the My Brother’s Keeper initiative that he’s launching from the White House.  I say that because I’ll never forget the impact of watching a live press conference on my lunch break last year and seeing Obama go off script about Trayvon Martin and hearing the words “Trayvon Martin could have been my son; he could have been me” coming from a president who was staring down not even looking into the cameras no doubt trying to maintain presidential composure.  The day he announced My Brother’s Keeper he had boys and young men of color standing behind him and watching the young man with cornrows speak at the White House was monumental.  Never in our country have we had someone speak about this issue who had the social and racial capital behind him.

However, like most political issues that dare touch one of the many third rails of politics, race, many of us can see it doomed from the start.  Now I don’t want to issue a premature autopsy on the My Brother’s Keeper initiative, but while Obama may have the social capital to pull it off, he certainly lacks the political capital trying to wrangle a Congress that can’t even pass a farm bill and a budget just because they’re bogged down in their own political quagmires.

But here’s the challenge, addressing the growth and development of black boys is not a simple issue.  Andre Perry wrote an article “America’s Problem with Black Boys” as a response to the multi-layered problems facing black men of color in this country.  In his response, he clearly dove head first into the nuances that surround this topic.  In fact, it’s a mine field of nuances in a society that increasingly favors generalizations and craves and devours simple messaging and black-and-white concepts.  Discussing this topic as surrounding the “plight of black boys” or the “struggle of boys and young men of color” is totally different from saying “addressing the growth and development….”  Nuances.  It’s at this point that the nuances can get misread, mistyped and misunderstood by both the sender and receiver of the message.  It’s also at this point where I’m taking the blogging privilege of respectfully disagreeing with some of the more nuanced points that Brittney Cooper made in her Salon article “Black girls’ zero-sum struggle: Why we lose when black boys dominate the discourse.”

I am grieved by some of the tone that Cooper takes in her response to My Brother’s Keeper.  While I myself am ambivalent about the initiative, we’re clearly ambivalent for vastly different reasons.  I think she misses some of the political significance of Obama actually saying and attempting to do something about trying to shift societal norms around how blackness is perceived.  Unfortunately the deaths of Trayvon Martin and Jordan Davis occurred giving him the platform to make this clarion call.  What is fundamentally wrong with acknowledging and doing work that supports and uplifts black men?

For me, to do work and support initiatives and to lobby for policy changes that is specifically geared to black and brown males does not make one a supporter of heteronormative patriarchy.  To do it solely without regard for women does.  Obama isn’t advocating one at the expense of the other.  Cooper appears to adopt the tone of “What about us?” that engages in comparative suffering and for me, that is where the real zero-sum struggle exists.

I’ll never forget sitting on the organ at this Baptist church I played for in the Ninth Ward in the Florida area and the pastor, relatively young, got up during pastoral announcements and said that the church was starting a purity class for the young girls and he proceeded to go forth in typical Baptist fashion spouting Baptist doctrine on holy living and clearly supporting abstinence until marriage.  And that was it.  For me, it wasn’t so much the shock that they were having a purity class in 2012, but that there was no young male equivalent–and he couldn’t act like there were no young boys in the church.  It was a neighborhood church full of families and families with kids.  So to take that example, it seems as though I would be regarded and seen as a misogynist because as a man I asked the question “What about us?” in regards to the male pastor not supporting some type of male responsibility program.

Beyond the problems of using personal responsibility and philanthropy as models to solve a deeply systemic set of social problems, the failure to imagine the struggles of men and women of color as linked together is perhaps the most short-sighted aspect of the My Brother’s Keeper initiative.

For there is no saving black and brown men without the labor and love of black and brown women. Yet surely, we have come far enough to imagine liberation strategies that don’t require men of color to tread over “this bridge call our backs.” While we, women of color, are doing the heavy lifting to keep our communities functional and intact, the question remains, “Who will lift us?” Who will fight for us? [emphasis added]

When Cooper says “For there is no saving black and brown men without the labor and love of black and brown women,” the inverse is equally as true.  But this to me encapsulates the dual tone she’s putting forth, one I agree with and the other I whole-heartedly disagree with.  My disagreement seems as though she’s advocating that we fight for black women, and then suddenly all will be well, and as a black man I shouldn’t have the permission to ask the same question: what about us?

The “women of color are doing the heavy lifting to keep our communities functional and intact” is a piece of conventional wisdom that has slipped into the narrative as a put-down toward black men.  While as a sociological work progressed and his-story finally got revamped to include women, the matriarchs of the families over the years were certainly a forgotten story and noting their participation something that is necessary and needed in the telling of the African American story.  But it’s equally unfair to remove black men from the story.  This small manipulation of the narrative changes the tone of the argument and places the onus of the suffering on black women, and therefore justifies this tacit assertion that if anyone is going to be saved it should be black girls before black boys–and I want to know why!

Granted this is an article on Salon and not a fully fleshed out article in a journal or an essay for a book compilation, but I’d be very interested in Cooper’s logic surrounding the what seems to be reverse hegemony.  There seems to be a latent argument that rather than black men dominating the discourse it should be black women–and to ask “what about [black men] us” would be to engage in patriarchy.  Why is that?  If one’s extant maleness and masculinity disqualifies them from the conversation alone, what type of black feminist hegemony is one really advocating?

As a country, we have a problem understanding blackness (both female and male) when it comes to sexuality, notions of masculinism and feminism, and just basic gender understandings: what makes you a woman and what makes you a man–through the lens of blackness.  Not only have white American’s general perceptions of blacks been distorted to the point of at times unrecognizable, we ourselves have struggled with what do we look like and who do we choose to be.  Even worse, black women have had the unfortunate position of at times having to choose between their gender and their race when it comes to their identity; the horcruxes of their soul at times have been scattered about the countryside as a testament to what being black and being a woman in America really means.  Nevertheless, black men are not the enemy of black women: we are your best allies in the struggle.  But, if a total disavowal of male patriarchy is an immutable pre-requisite working together, then this dyadic tension will become an exercise in perpetual motion, eternally going back and forth.

This is where the comparative suffering results in the zero-sum gain for both black men and black women.  If we have no problem lobbing bombs at the other side, or even in Cooper’s case where it seems at times she’s advocating against a black male initiative only to replace it with one for black girls, then what have we really gained?  Maybe it’s my own myopic disagreement that the only way to save black boys is to save black girls.  Or maybe it’s my questioning of the source that Cooper quoted from African American Policy Forum that in a decade less than $1 million was given in private dollars to fund initiatives for black girls when organizations such as Black Girls Rock, Inc., National Council of Negro Women, National Coalition of 100 Black Women and the black sororities of National Pan-Hellenic Council have sponsored dozens of initiatives nationally and locally to support black women–and I’m sure over the course of a decade donations and philanthropic monies have totaled over $1 million combined.  What have we gained when we spout these statistics and do nothing to more than acknowledge the problem as we see it and offer no meaningful solutions?  I don’t want to throw the baby out with the bath water because Cooper is correct in asking where are the White House initiatives for young black girls of color.  The disparities along racial lines versus that of their white counterparts is hard to ignore, but I get off board if Cooper is advocating for black girls over that of black boys.

Male privilege is real, I operate in it when it’s to my advantage at times and probably do so in other ways that are subconscious to both me and maybe even others in the room.  However, as I’ve gotten older, I have been more and more aware of it and at least give disclaimers sometimes when I speak or write acknowledging that I am coming from a place of male privilege.  But I’m not giving it up totally.  I don’t plan to–unless it’s understood that we’re in this together.  If it’s always going to be a fight, I’m going to keep my weapon of privilege and use it when I feel it’s tactically necessary.

A black woman is good enough–and so is a black man.