Skip to content
Posted on January 24, 2014 by the uppity negro

In full disclosure, I’m only one generation removed from cotton fields and inner city public housing.  My dad grew up in a house, but he, his brother and older sisters and parents worked out in cotton fields to make a living as well as his father doing odds and ends jobs around in the small Acadiana town in south central Louisiana.  My mother attributes her formative years to living in the Ida B. Wells Housing development–the projects–on the south side of Chicago on east 37th Place.

I, on the other hand, grew up in the Hyde Park-Kenwood neighborhood of Chicago.  I always preface that by saying, Barack Obama moved into my neighborhood, I was there first.  Yes, I now claim the Obamas as neighbors and it’s a mark of privilege that I clearly embrace.  That notwithstanding, I’ve always been aware that I’m only one generation removed from what it meant to struggle, and to what it meant to literally be poor.  My mother always told me stories of walking to Doolittle Elementary on 35th and Cottage Grove and how her mother would give her money for a school lunch, and she would still be ten cents short; my mother grew up on public aid.  It was real.

Then I came back one year and Ida B. Wells was gone.  Leveled. 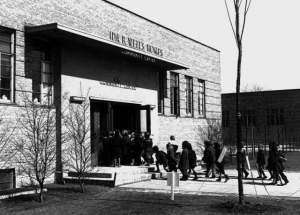 My parents would occasionally drive down the the twisty development-esque roads of Vincennes and east 37th place to drive me by the house in which my mother grew up.  It was unrecognizable from the grainy black and white photos she has from a Brownie camera with timestamp dates of the early 1960s.  The futile attempt to colorize the images of my mother’s past were rendered moot as a kid driving down seeing the same play ground equipment my mother played on, and just a drab grey landscape smack down in the middle of the city.

Still one day, it was all gone.

I took a picture, perhaps it’s somewhere on the internet on a Facebook page of just how flat the ground looked once the Ida B. Wells development was gone.  Gone.  No plaque.  No memorial.  Nothing.  Even though I never grew up there, I had a connection to it.  In the same way wealthy families speak of the homesteads that have been around since the 1800s and land was “bought” from Native Americans, that home that address 667 E. 37th Place was my mother’s home–I think.

I remember reading the news article about the last resident of the last Cabrini-Green towers to be torn down.  She had been there over two decades.  She remembered how the neighborhood “used” to be, she remembered Girl X, and little Dantrell Davis.  I thought why was this lady so holding on to the derelict and the living and visible epitome of urban benign neglect.  Cabrini-Green and Robert Taylor homes were the living symbol of what goes wrong with systematic racism so why would anyone want to hold on to it.

That had been a question that roiled around in the heads of many of the people I grew up with, we never saw the validity in holding on to the urine in the hallways, the broken elevators, the burned out units, the crime, the drugs, who wants to hold on to that.  I even tried to pathologize it seeing as how blacks who inhabited the worst of the worst were usually from families down south that had migrated to these black ghettoes of the north and they didn’t have anything except the projects and that’s all they were comfortable with for more than one generation.  My friends and I even made tut-tuts at the people who stayed there with grandmother (because grandfather had been dead or nowhere around), mother (with no man), and a teenage daughter who might be pregnant, sometimes with not even a good 50 years spanning from the mother’s birthday to the intended due date of the fourth generation to be born in the projects.  We tut-tutted because who wants to live on “the dole,” on purpose.

Not to mention it’s public housing.  Public.  That means the residents don’t own where they live.  It’s been a point of critical irony that spoken word artists and so-say conscious rappers have recently been quick to highlight how can black and brown people shoot and kill each other over territories and sets that they literally don’t own!  We never owned the ghettoes, they were always public housing or owned by some absentee landlord.  The buildings that blacks did own were usually noted by the care taken to make the property look somewhat decent and respectable.

Then today, I saw the news story that John MacDonough High School in mid-city here in New Orleans was closing.  John Mac, as the school is locally known was a school placed into national prominence in 2003 with a brutal slaying in the school’s gymnasium gunning down a 15 year old, and again just last year featured on the reality show “Blackboard Wars.”  I read Jarvis DeBerry’s opinion piece and it finally clicked.

Dear students of John McDonogh High School:  It is with heavy hearts that we, the residents of New Orleans, write you this letter informing you that we find it impossible to educate you. We’re giving up on our stated goal of preparing you for a future that requires your literacy, your facility with numbers and critical thinking skills. You have our regrets.

And so, you poor students, we’re just going to quit while we’re behind. We’re going to shut down your school in June and try to get a head start on helping the kids behind you.

So why should we persist in this charade? Why should we keep pretending that anything is going to get better? Why not just leave you to our own devices so we can better focus on your little brothers and sisters behind you?

So, after y’all are out of the building, local officials plan to reshape it into something nice and lovely. We’re talking a new cafeteria, a new science lab and a performance space. It’s also supposed to have the tip-top in energy efficiency.

That new John McDonogh is going to be some special! Students are going to love it. No, not you current students. You’re a lost cause. You can’t be helped. But trust us when we say we’re going to go all out for the students coming behind you.

Those satirical excerpts highlight the massive cultural consciousness in which blacks seems to grasp to this that we don’t own. I surmise that blacks who look back at fondness as alumni of John Mac, or certainly in the vein of my mother looking at a childhood home that she didn’t own, where the walls could tell countless tales of hope and despair, where the grass was worn bare and told the story of a stony road trod with a bitter chastening rod, and floorboards had absorbed the blood, sweat and tears of mothers praying for their sons to finally get right–this emotional and cultural connect to something we don’t own is wrapped up in the concept and a constant reminder that America wrote the Negro a bad check.  Every time we drive by an abandoned school, a run down public housing development, or encounter the re-gentrification of a neighborhood we are reminded that as blacks in America we are holding a check that has been returned back to us with the red stamp of indignity marked “Insufficient funds.” 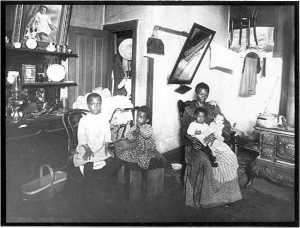 Blacks that moved to the north in the 1910s and the 1920s moved into slums.  The got off trains with all their earthly possessions on their back and in their hands while the men went looking for work in the steel mills or downtown as a dishwasher, the women were shuttling children to the the slums and finding “coldwater flats” which were tenement buildings just have a roof over their heads.  These coldwater flats were formerly occupied by European immigrants and had been considered too run down by most of the city, but still good enough for the Negroes who were just moving up to the northern cities.  By the time the New Deal programs were coming into effect with regards to fair housing, the building of public housing was such a step up from living conditions and a dream-come-true.  It was a promise that life can get better and the American dream can even be the reality of the Negro.

Even in an era where “ghetto tours” are offered, where international people can come and view what it means to be poor in America, I get it. (However, don’t Americans do that when we go to Rio and want to see the favelas, or when we go to Johannesburg and want to visit Soweto?  Just asking.)  I get why people will be sad to see John Mac closed and reopened as a charter school all shiny and new.  I get why blacks want to hold on to Ida B. Wells, to Cabrini-Greens, to the Iberville, the St. Thomas, even the squalor that had become the Magnolia and the Calliope projects: if we let it go, it releases this country from ever culturally having to acknowledge that it was ever in the wrong.  Being forced to move out to, go fend for themselves away from the center of the city, away from reliable bus lines, away from the public aid offices, away from grocery store, maybe even away from basic corner stores, it is an almost literally sweeping of the dust under the carpet as though it doesn’t exist.  Public housing built as early as the 1930s that’s still in standing today does not fit in the image of a middle-to-large cityscape.  So, it makes sense to demolish it and act as if it wasn’t ever there, but the human collateral damage is an untold story.

This is not some veiled attempt to make the ploy for reparations to blacks in America (although I think there’s a solid case for causation here), but it’s an acknowledgement of the collective trauma that blacks have faced and are still facing today.  I bet if you ask your average black person to unpack why they might feel some emotional tug at the closing of John Mac, they wouldn’t be able to trace it as such and you would hear most comments referring the ubiquitous yet inconspicuous “them” and “they” as code words for the hegemonic white power-structure.

We hate what the ghetto has become and what it has symbolized, but at the same time we hold on to it because we love it, whether we own it on paper, we owned as a part of our lives, right or wrong.  We love it because our blood, swear and tears are a part of the ground we walk on, but we hate it because our blood, sweat and tears have watered the piddling grass that grows pushing up through the concrete in spite of.

‘Tis our lot in life, to both love and hate, to hate and love in spite of.  It is our struggle to own that even as we are forced to tear up the check that we have been handed back marked “insufficient funds,” we must still require our nation and our society to fully acknowledge that we are here and we’re not going anywhere.

Shadowed beneath Thy hand,
May we forever stand,
True to our God, true to our native land.