Skip to content
Posted on June 3, 2012 by the uppity negro

I know it’s old news, but this was a topic I had intended to weigh in and offer my opinion.

In case you missed it, last week MSNBC host Chris Hayes’ made some comments about the word “hero” attached to the word “soldier.”  I remember reading the initial story from a couple of tweets and I oddly enough agreed with him.  The story got back to me initially that he was taking umbrage with the fact that “hero” was overused in the context of American soldiers.  My kneejerk reaction was to agree with him.  But here’s the following quote that Hayes’ said:

I think it’s interesting because I think it is very difficult to talk about the war dead and the fallen without invoking valor, without invoking the words “heroes.” Why do I feel so [uncomfortable] about the word “hero”? I feel comfortable — uncomfortable — about the word because it seems to me that it is so rhetorically proximate to justifications for more war. Um, and, I don’t want to obviously desecrate or disrespect memory of anyone that’s fallen, and obviously there are individual circumstances in which there is genuine, tremendous heroism: hail of gunfire, rescuing fellow soldiers and things like that. But it seems to me that we marshal this word in a way that is problematic. But maybe I’m wrong about that.

Rhetorically proximate to justifications….. Really Chris?  You just gon’ drop those $5 words on us like that?

Mind you he was in the audience with the famed black conservative linguist John McWhorter who essentially agreed with him.  Chris just offers this up as typical MSNBC conversation and the panel doesn’t seem to have any problems with it.  Here’s the following exchange as told by HuffPo:

Hayes’ fellow panelists expressed similar discomfort. Linguist and columnist John McWhorter said that he would “almost rather not say ‘hero” and called the term “manipulative,” even if it was unintentionally so.

Hayes then said that, on the flip side, it could be seen as “noble” to join the military. “This is voluntary,” he said, adding that, though a “liberal caricature” like himself would not understand “submitting so totally to what the electorate or people in power are going to decide about using your body,” he saw valor in it.

The Nation’s Liliana Segura then chimed in, saying that “hero” is often used to paint wars in a “righteous” way.

“These wars in Iraq and Afghanistan … aren’t righteous wars,” she said. “We can’t be so afraid of criticizing a policy.”

The rage that ensued, for the most part, missed the entire point of what Chris Hayes was saying.  But as typical American mainstream media and certainly the blowhards on the right who have a bully pulpit on the airwaves of some sort, they removed the words like rhetorically and proximate and acted as if they couldn’t use a dictionary, oversimplified his comment to a neat erroneous soundbyte.  As far as they were concerned Hayes said “American soldiers shouldn’t be called heroes” without any context and in some journalistic vacuum–and he did it on Memorial Day–one of the most holy of holies of jingoistic and patriotism.

The reason I agree with Chris Hayes is because when we use the word “hero” and attach it to the soldiers that come back, the ones that are there and the ones that have died, we do give justification for “the” war–or whichever one we have fought in the past.  The United States hasn’t seen war on our own land since the Civil War.  So you do the math, it’s been 147 years since we, Americans, know what its like to dodge bullets in American cities and deal with the stench of dead bodies from war casualties; it’s easy for us to talk about war when war has not truly been a part of the American consciousness since the first time all males of the country were given the right to vote.

Granted it’s easy for me to take this stance because I’m more or less a fully avowed pacifist.  I don’t see much need or cause for war, certainly not one to be fought when I can run the list of domestic problems that are probably not being addressed because of our undivided attention in foreign affairs.  Nevertheless, another reason why I agree with Hayes is because this war, is not a draft war. 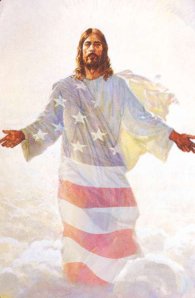 For me, heroes are those who go above and beyond what is asked of them to do.  If all of these soldiers were heroes as many of the conservative ilk have no problem blindly saying, then shouldn’t all of them have some type of military medal or rank or some kind of status?  Honestly, it’s just plain illogical to say that.  They were quick to say that “So my grandfather who stormed the banks of Normandy on D-Day [seems like every middle aged white guy in America had a grandfather who stormed the banks of Normandy huh?] wasn’t a hero?  You wanna come tell me that to my face?!”

Certainly, those men who were drafted into World War 2, the Korean War and even the controversial Vietnam War had hero attached to them because they were asked to do something above and beyond what they would have normally done, and they succeeded.  As war progressed into the nuclear age post-WWII the concept of war and empire shifted.  No longer was there the “Axis of Evil” that we could clearly name and we could clearly see.  Truth be told, with WWII, Allied forces were literally going in to free captive people, masses of them.  Here with the war in Afghanistan and even in Iraq, at this point, I can’t clearly tell you what the purpose of us being on the ground is for.  Pulling ephemeral concepts like “fighting for freedom and democracy” don’t move me like they once did.

The men and women joining the armed forces and the National Guard these days, half of them are doing so because the economy is in the crapper and they have limited options.  If these young men and women didn’t have the National Guard as an option, working a low-paying wage job and entering the ranks of the working poor is their only option.  At least joining the armed forces gives them a fighting shot at the elusive “American dream” and might even pay for college in the midst of it.  If anything, this makes them an opportunist–not a hero.

Hayes shouldn’t have apologized because it dampens the potential of conversations that we need to be having in this country.  But it’s the way of the world.  From Obama leaving Trinity United Church of Christ and disavowing his relationship with Trinity; to Roland Martin apologizing for his comments about men watching the David Beckham SuperBowl commercial; to Cory Booker’s mea culpa; and even to this case, when you apologize, you sweep the situation under the rug and you effectively end the conversation.  Because Obama apologized, we, as a country missed a chance to possibly have a frank out-in-the-open conversation about race; because Martin was forced to apologize, we never had the conversation about the nuanced difference between homophobia and anti-masculinism in this country; because Booker apologized, we never discussed just what point of view he has a municipal leader versus that of the larger national picture.  For me, I thrive on discussing the nuances and putting a fine point on the issue.  Most of us are never taught nor trained to that, hence the saying the devil is in the details because it’s in the details where people’s real feelings and emotional ties can be found.

Remember when then-GOP candidate Rick Santorum made a comment about black people and welfare and the next day he made his rounds saying that he flubbed and said “blah” people?  Well, truth be told, I wish he had just stuck to his guns and remained quite clear in his prejudiced thinking.  (And frankly I was hoping he got the nomination because we would have had a real presidential election with two clearly distinctive candidates.)  But what does it say that we, as a nation, force people to apologize for how they really feel?  What good does it do us as a nation?  As a black male, I’d rather racist politicians and bigoted persons with a mic just say how they really feel.  It does me no good that they cover up their true motivations because in turn they end up wielding more power and do more damage.

The fact that he’s still going forward about Obama’s birth status is almost laughable.  The fact that even the state of Arizona is still entertaining this foolishness is at times joke-worthy.  The rest of the country has more or less moved forward to bigger issues like the economy.  While some said Obama entertaining Trump by actually holding a press conference solely about the birth certificate issue was playing into Trump’s hand, the fact he’s still talking about it makes Obama seem even more like the bigger person in the deal.

But at least we know Trump is a bigoted fool.

Chris Hayes’ comments, let’s be honest, didn’t go over well on Memorial Day, but obviously he’s a bleeding heart liberal who probably views holidays such as Memorial Days as moments to constructively critique our American practices rather than a moment to blindly bow in patriotic honor to the flag and to the god of American exceptionalism.  If he really believes that, then kudos to him and more power to the guy.  But, like all of us who have a job over the age 25 perhaps, we like the roof over our head and the clothes on our back and food we eat–he had to apologize to keep his job I’m sure.

However, to those who are free, please speak up on behalf of the rest of us who have day-jobs we’d like to keep in the midst of this downturn in the economy.  We can’t afford to have people apologizing for their personal beliefs when, indeed, lives are on the line.

So please, speak up.