A little known factoid about me is that I like modern Westerns.

I don’t know what it is about them, but I do.  Personally I blame the “Back to the Future” trilogy.  That was a movie my parents had taped for me, only had part two and part three, but I watched them on repeat.  The third installment took place in the first week of September the year 1888 in the fictional Hill County, California.  It used all the stereotypes from the old Clint Eastwood movies with women wearing the frilly petticoats and dresses, the men all carrying six shooter pistols, fraught with saloons, blacksmiths, steam locomotives–something straight out of a Hollywood set.

I’ll admit, my intricate knowledge of the frontier is a bit slacking, that is to say that I’m not a scholar of this part of American history, however most Americans have become scholars in the Hollywood narrative of the American west.  My love for westerns, I think came from my liking of the computer game “The Oregon Trail.”  I remember the original game that my parents had on their Packard Bell 386 that you had to access the game from the C-prompt in DOS after you logged out of the Windows 3.1 version.  I remember the oxen dying and morbidly living through the virtual death of family members you named as they died from cholera and dysentery along the side of the 2,000+ mile trail.

I grew older and movies like “Back to the Future III,” “Tombstone” and “Young Guns” and even the comical “Cherokee Kid” and”Wild, Wild, West” were movies that I liked–the modern Westerns.  The remake of “3:10 to Yuma” was the movie that made me pause and think this out however.  The remake of “3:10 to Yuma” was a reaction more toward railroad barons and the expansion of America than the typical cowboys and Indians concept we have of when we think of Westerns.  Then I looked back at all of the Westerns that I had come to enjoy over my short years and I realized that for the most part Indians were non-existent in these movies.

Out of the movies that are a part of my modern Western viewing memory, only one short scene in “Back to the Future III” shows any aggression on behalf of tribal Indians.  In the other movies, Indian portrayal is that of some pseudo-assimilated male who is shown as a skilled warrior who doesn’t have a speaking role.  If an tribal woman is shown in the movie, she’s usually portrayed as some mystic or exotic beauty that transfixes the lead character and becomes some type of romantic interest for the movie.

Like I said, I’m not a historian, but somehow these staid plot lines seem like Hollywood machinations.

What bothers me about this is the gross romanticizing that gets done in this movies.  It’s one thing to portray this fictional historical account about “how the West was won” with regards to American settlers on tribal territories and the reverse barbarianism of whites against Native Americans, but even the false depictions of everyday life have begun to irritate me.

Now I was the geek that watched the episodes of “1900 House” and “Frontier House” set in 1883 Montana on PBS (and yes, I remember seeing Oprah with no makeup when she and Gayle did a guest appearance on “Colonial House”), and trust me, the life was NOT glamorous.  The people were dirty all the time, there was no indoor plumbing, life was hard even on a good day and sicknesses were a constant threat.  So when I watch these movies and see these people in pristine clothing that looks tailor made (as it is a costume), no one exerting more energy than what it takes to saddle a horse and draw a pistol or a knife, I find myself rolling my eyes.  To see these women, as portrayed in “Tombstone” living the grand life of ease and even wearing makeup–by golly, they had makeup out in Tombstone, Arizona that readily available?  Color me surprised.

But, I’m not a historical expert on this. 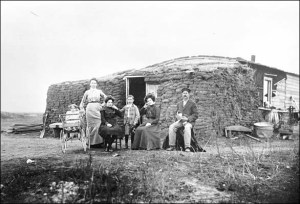 It teeters into the realm of revisionist history.  I think even the most conservative historians would have to admit that Hollywood has romanticized the view of the “wild, wild, West” to the point of pure fiction.  What personally irritates me is this glorification of Americanity through violence.  The West, as we know it, was “won” through violence.  For as much hard work, endurance and perseverance settlers and homesteaders who emigrated west put into establishing towns and settlements, they were occupying previously inhabited land.  I guess the glory of the slayings of tribal Indians doesn’t go over well in Hollywood.

No wonder we haven’t seen a modern Western movie about the Battle of  Little Bighorn, huh?  Portraying the might of the American military as losers just isn’t a story worth telling for Hollywood.

I had a friend in high school, the son the Polish immigrants to Chicago and a Poland native himself evidenced with a last name full of hard consonantal clusters say in our 12th grade AP U.S. History class that if it wasn’t for the settlers that we’d all be living in teepees.  I think that’s when I stood up and knocked over my chair incredulous that he felt comfortable enough to say that out loud, let alone that this was a belief of his.  And others in the class just seemed a bit indifferent to the statement.  So if the son of Polish immigrants felt this way, one had bought into the American story so wholly as his own, what about the rest of us?

Without question, history is written by the victors.  In this case the victors are white, heterosexual males.  The “cowboy” depiction is one of those Alpha-male images that Americans easily identify with.  It’s a defined ruggedness that is equated with the epitome of maleness.  From images of the Marlboro Man wearing the large Stetson to George W. Bush making covert cowboy references with regards to our foreign policy on terrorism and Osama bin Laden.  Such images and rhetoric respectively conjure sensibilities that are familiar and uniquely American.

What I’m having issues with is that a) how we have seemingly revised the history of the American west post-Civil War until 1900 and b) how comfortable we are with “West being won” through means of terroristic violence.

The acts of terrorism on behalf of railroad barons, US military and the pop-up haphazard local law enforcement from local territories toward tribal Indians was merely one small step away from being categorized as a successful genocide.  The calculated and wanton extermination of Indians is absolutely repulsive.  I guess it’s not a hard stretch because of the infuse of theology into the equation.  The historical concept of “manifest Destiny” is just as much of a theological mindset as it was a domestic policy concept.   There was the belief that the American settlers had been ordained by God to inhabit the land.

This isn’t an unfamiliar biblical concept.

The Israelites were sanctioned by God to inhabit the “land of the giants,” which was Canaan and they had God-specified orders to kill everyone and everything.  I’m not making this up–go read the first eight chapters of the Book of Joshua.  We so readily identify with the victors of the story that we rarely if ever see things from the side of the victims of the story.  Honestly, can you imagine Canada saying that God told them to begin inhabiting the city of Detroit, just on the other side of the river Detroit and the U.S. would be okay with it?

I was spurred to write this story after seeing the following trailer.

I can only imagine what this plot will hold for us.  No doubt the name of the town is going to have some apocalyptic end-of-the-world terror infused in it and I’d bet money that somehow the cowboys and Indians are going to unite powers in order to defeat the aliens–yet again, history isn’t being told.  I guess when you throw aliens into the story line all bets are off on sticking to historical facts.  To that end, I guess I can concede a bit.  But I wonder will the film fall into the “us vs. them” dichotomy, but still reserving Americanity as superior and therefore “us” is better and will prevail.  I mean, I can hardly see a Hollywood moving diverting from that path; why would we image “them” as better than “us”?

But if the movie goes that way, the aliens being superior–obviously when it comes to technology–then what does that say about cowboys versus Indians?  Does it not admit that belligerent and hegemonic behavior is abhorrent?  Essentially it does, but no doubt the underlying message will still be that America is the best.  No doubt the cowboys of the movie will prevail based on their grit, their endurance, perseverance and their strong belief in American values (whatever those are) thus showing that the alien and Indian narrative are subordinate to theirs.

Is it wrong that the nomenclature of “alien” in the midst of our ongoing domestic immigration policies with ethnic Mexicans is a bit too ironic for me to not laugh at loud?

On another note, why are imaging manliness with a name that refers to men as a “boy”?

9 thoughts on “How The West Was Won: Violence in the American Wild, Wild West”