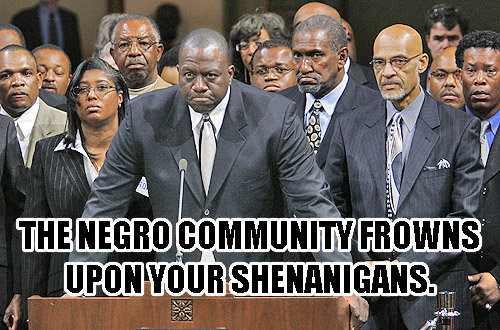 Friday, November 5th signaled the end of a rough four days for many blacks here in America.

The 2010 Midterm Elections.  The Democrats took a “shellacking” to borrow the term used in Wednesday morning’s hour long press conference given by Barack Obama.  Many governor’s mansions flipped over to the Republicans; the House of Representatives changed hands, the most in nearly 70 years; Iowans voted out the judges who legalized gay marriage in the state; and Dems lost a few seats in the Senate.  It was bad, but it wasn’t the horrible slaughter Tea Partyers and GOP members had predicted.  For what it was worth, the likes of Sharron Angle and Christine O’Donnell remain as private citizens.

It was bad for black folk because it was apparent that the Democratic National Party cared nothing about the only two black Democratic party members running for the U.S. Senate: Alvine Greene and Kendrick Meek from South Carolina and Florida respectively.  Look, I wouldn’t want Al Greene in office myself, just look how he was acting at his “party” after the election.

That was just sad.

But, the question still remains how did the Democrats even let him get on the ticket in the first place.  Moreover, down in Florida, a state that has no problem going Democratic, how did Kendrick Meek come out as such a horrible third place.  Not saying that he should have or could have won, but still in a major two party system, in the state of Florida, the Democratic nominee shouldn’t have placed as he had whether someone like Charlie Crist was running or not.

So, of course this is yet another window when no blacks are in the U.S. Senate.

The last time there were no blacks in the Senate was the stretch between 1998 and 2004 when current Chicago mayoral hopeful Carol Mosely Braun and Barack Obama were not in office.  Oddly enough, in 2000 when the Congressional Black Caucus did take a stand to oppose the certification of the electoral votes, but the objections needed to be sponsored by one member of the Senate (per an 1877 House rule during the Hayes-Tilden stand-off where the election was actually decided by the House because of a disputed popular vote count) and of course, there were no black members of the Senate at the time.

I’m going to be honest, I’m really scared.  I’m convinced that in the next two years that between Senate-elect Rand Paul and soon to be Speaker of the House John Boehner that we’re going to hear talks of impeachment surrounding Barack Obama’s birth certificate.  Or, John Boehner’s going to give a run for the White House in 2012, and names like Kentucky Sen. Mitch McConnell and Mississippi Gov. Haley Barbour are going to be names we’re sadly going to get more and more familiar with.

The newly elected GOP only has two things going for them: fear and hatred.  As far as I’m concerned, that’s not a governing plan.  They’re going to come in bull-headed about repealing health care which in their eyes will cut spending, ergo lower taxes and spur the economy.  Yeah, trickle-down theory 101.  They do NOT have a plan for job growth, nor do they probably intend to create one. As far as I’m concerned earmarks aren’t all that bad.  Often times they help replace worn out infrastructures and aid the communities and districts they’re earmarked for.  As far as I’m concerned earmarks brings money back to one’s district for civil works projects and guess what it does?  Creates construction jobs.

And when those projects are done guess what?  People are employed to work at the newly built civic center or waterpark.  Granted, when you hear about the $1.2 million dollars allocated to pig ear research we’re left scratching our heads, I have no rebuttal for that.

If you voted Republican on voting day, I want to smoke what you were smoking on November 2nd, because you MUST have been inebriated if you seriously thought having the GOP run things was a good idea.

Keith Olbermann Suspended from MSNBC. Despite the Twitter fracas that he causes surrounding Jon Stewart and the Rally to Restore Sanity march, Keith Olbermann and Rachel Maddow on evening cable news programs is a must see for many blacks who are politically minded.  I think only Bill Maher trumps those two.  Which almost doesn’t count because comedy is much more Maher’s schtick while both Olbermann and Maddow claim to be agents of the press.

Apparently Olbermann contributed to the campaigns of some Democrats in this midterm cycle–without the permission of management–thereby violating an ethics clause in his contract.

God knows who’s really contributing what behind closed doors.   Frankly, I lost a large amount of respect for Olbermann back in 2008 when he went on The View and told everyone he didn’t vote.  I remember the look on Joy Behar’s face as if to say “You’re joking right?” which, sadly, he isn’t.  He’s of the opinion that he doesn’t vote in order to stay objective.

Olbermann’s good at what he does and he’s clearly talented and probably a decent enough journalist in the pure sense of the word.  That being said, I shed no tears over someone like him; he’ll land on his feet people like him always do.

Johannes Mehserle’s Verdict in the Oscar Grant killing. The cop received a two year sentence on the involuntary manslaughter charge of killing unarmed and subdued Oscar Grant in a 2009 New Years’ Day ordeal on a BART train platform in Oakland, California.  The judge also counted time served in this case, so Mehserle could be looking at somewhere around a year of extra time served give or take how an appeal may work out.

According to the stories I’ve read from the LA Times and the Santa Cruz Sentinel newspapers, the Los Angeles County Superior Court Judge Robert J. Perry overruled the jury.  The judge is saying that the evidence presented showed that this was an accident based on some eyewitness accounts and the apparent remorse he showed in court.  Really? Remorse shown in court is now enough to make judges knock down sentencing.  Please tell Ray’vonne, Jemarcus, Demetrius and Pookie and n’em that this new rule is in affect when they get picked up for standing on a street corner.

Then Judge Perry knocked down a ruling by the jury concerning a finding by the jury that Mehserle intentionally used a gun.  The judge said that he gave the jury bad instructions and that there was insufficient evidence to support that theory.  To which I say, why wasn’t this just a bench trial from the start?

Finally, Judge Perry was quoted as saying “It is obvious to this court that the community is greatly polarized, and, in my view, that is a tragedy of this case…I cannot and will not allow consideration of race to impact my view; based on the evidence this is not a case about race.”  Telling a black mother that her son, who was subdued and unarmed, was shot and killed by a white cop automatically makes this case about race.

As I get agitated just writing about this, simply put, Michael Vick received and served more jail time than Mehserle will probably serve.  Granted one day in jail for a former cop is not good news for Mehserle, nonetheless, justice was not served.  Black men received a tacit message that this country cares more about publicizing the off the field engagements of a black man and how he treats a dog rather than the institutional mistreatment of black males in the criminal justice system.

I read Malcolm Gladwell’s Blink in college and he went into minute detail about the number of seconds it took for the police officers to shoot unarmed Amadou Diallou 42 times was astoundingly short–as was the case with Oscar Grant.  This is not to deny deep-seated racial prejudices that existed, but it put such cases as this into perspective.  The perspective that it put me in is that we have a long way to go in understand justice in this country and that we still need to do better in acknowledging race.  For the judge to tell a black family that (and for the record, I have no idea the race of the judge, nor does it matter given what I have to say) race doesn’t factor into a case concerning police violence against a black male is the epitome of insensitivity and I dare say racist itself!

When cops feel that it is okay to shoot first and ask questions later in the recent cases of Aiyana Jones, Sean Bell and Amadou Diallou — not to mention the hundreds of other countless black men and women who have been shot in their backs, unarmed by police that don’t make the national news circuit — it is a race thing.  Do you think police officers, black, white, Latino or Asian would be so trigger happy if they were pursuing a white person?  Black men have a certain fear when they see those blue lights flashing in a rearview mirror and see a cop approaching the driver side and another cop standing outside, hand on the gun.  Granted that’s standard procedure, but black males can’t help but think If my time is up, and I get shot for some random reason, will justice be served?

If nothing else, this told me that I need to do better research on those long lists of retention judges that looks overwhelming at the back of your voting ballot; you know all those that have you vote yes or no.  I hope the residents of Los Angeles County remember this judge’s name when he’s up for re-election and vote him off the bench!

Especially in lieu of the recent elections, situations like this with Oscar Grant and other police brutality cases will never see justice until we see meaningful and permanent policy changes.  It’s nice to march and protest, but until the laws are changed, it’s all for naught.  That means as a voting bloc blacks and Latinos need to do a helluva lot better with coalition building.  We must put city council members, state senators and representatives and certainly send congressional House members to Washington who actually give a damn about the people they’re representing.  As long as we remain so apathetic and disillusioned to not go vote, we’re merely biding our time until we add another black male to the list of victims of the criminal justice system in this country.

This was a bad week for black progressives.  The hope is that next week will come and with it another chance for “justice to roll down roll down like waters, and righteousness like an ever-flowing stream.”

What do you think the GOP tactic is going to be with a House majority?  Do you foresee possible impeachment hearings? John Boehner running for President?  What should Obama’s tactic be now?  How do you feel about the Oscar Grant verdict?