Skip to content
Posted on October 21, 2010 by the uppity negro 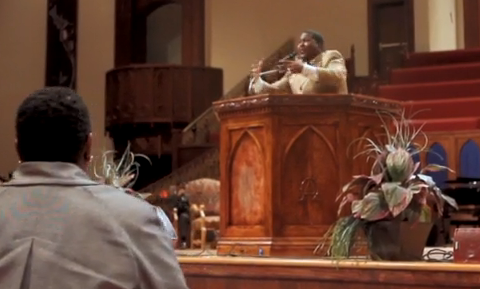 On Wednesday, October 20, CNN.com posted a news article entitled “Black preachers who ‘whoop’ — minstrel or ministers?” that amongst the black churchy folk was a subject of tweets and Facebook status updates; many went so far as to link the news story to their Facebook pages engendering comments aptly defining the “whoop” (pronounced “hoop”) as either minstrel, ministry and for some it’s both.

If you’re still lost as to what I’m talking about and you haven’t clicked the link of the story, the “whoop” is the end part of the sermon when the preacher goes from a speaking voice into a musical pitch.  To someone unfamiliar, it kind of comes off as singing, but usually most black congregants wouldn’t recognize it as such. The preacher finds a different cadence that previously before that is in sync with the musicians.  Esteemed homiletician and professor Dr. Henry Mitchell has dubbed this part of the sermon as the “celebration.”

To a large swath of the African American church populace ranging from those in urban settings to rural settings and all in between, this practice of whooping at the end of a sermon is relatively common and considered normative for the preaching moment.  However, as the title of the CNN.com article posed, the big question amongst scholarship and black preachers alike is whether or not this is minstrelsy or ministry.  Unlike the video clip, the article does decide to push the envelope further by asking is this something that only black preachers can do or is something in which white counterparts can partake.

To deal with the premier question, that truly depends on one’s background as to whether whooping is minstrelsy or ministry.  I think in mainstream media’s attempt to dissect all things in the black community in the Age of Obama combined with an American listening public that has grown attached to 10 second sound-bytes like conjoined twins, that certain topics don’t get their full breadth of how to understand them and deal with it.  Such as was this piece published on CNN.com.  While the written article did take the time to get quotes from well known homiletics professors such as Drs. Teresa Fry Brown and Henry Mitchell, get an opinion from white Pentecostal preacher Paula White well known in black evangelical and Pentecostal circles, the video was a shoddy piece of journalism.

I say this because it seemed as though CNN went no farther than their Atlanta backyard to find a preacher who exuded the performative aspects that are generally associated with a black preaching style–namely the pastor’s ability to whoop at the end.  While this is not an attempt to castigate Greater Traveler’s Rest Baptist Church or malign the integrity of their pastor E. Dewey Smith, Jr. for his interview, it’s just simply that that was one pastor’s understanding of this aspect of black preaching and the black church experience.

The reason why person’s see whooping as minstrelsy is because of it’s apparent reliance on emotionalism.  This idea of emotionalism has been around since the days of slavery out of which the black religious experience was birthed in what Albert Raboteau called “slave religion.”  It has its geographical genesis in middle of woods with “brush arbor” meetings away from plantations and masters’ houses in order to have an encounter with God on their own terms.  This form of black religion began to bump heads with a Eurocentric style of worship by the 19th century after the establishment of the African Methodist Episcopal church (denomination) that even had critics looking down on worship that maintained the African retentions as having “fist and heel” music according to AME Bishop Daniel Payne.

This article presents black church life as homogenous.  Particularly accompanied with a video clip, most persons will watch the video clip rather than read the article.  This is a problem for me because I get concerned when I imagine how residents of mostly white suburbs or states (such as Iowa or New Hampshire or Montana or suburban enclaves where mixture with urban dwelling blacks is kept at a minimum) would react to seeing this.  Combined with Hollywood images that when a black church scene is done they seem to take their cue from the scene from the 1980 movie The Blues Brothers.

Mainstream media fails to portray that there are black Roman Catholics, Lutherans, Episcopalians, Presbyterians and various forms of Methodism and even non-denominational churches that don’t have such performative aspects of worship or preaching that is familiar to them.  To nuance it even further, many of the older all black congregations in black Baptist denominations and few Church of God in Christ churches do have preachers and pastors that do not whoop.

The reason why is because general thinking is that whooping applies to one’s emotions rather than one’s intellect.  Personally, I’d have to agree with that logic.  To use Smith’s analogy of the meat and gravy concerning the body of the sermon and whooping respectively, not all meat needs gravy to be enjoyed.  In my own personal, non-scientific observation, for many listeners one has not preached unless a certain intonation in the voice has been reached, a certain cadence has been established or some type of “frenzy” has been incited.

Amongst fellow preachers, it’s almost an issue of bragging rights.  Who’s whooping can kill a crowd?  How well are one’s vocal acrobatics that can incite a frenzy amongst a crowd.  Many black churchgoers have observed that when a preacher, usually male, gets to the close of their sermon that the whole pulpit, again, usually male, stands up and sometimes even pats the preacher on the back while in the midst of them whooping.  Often time the first row of deacons and other ministers who couldn’t fit on the pulpit vacate their pew and approach the pulpit as preacher has begun their whoop.  Engaging in the call-and-response each finding a resonant pitch with each other between the preacher, the musician and the congregation yelling back “You preachin’ Docs” and “You pullin’ it Revs” and “Put ya weight on it sirs” and the ever popular “YEAHs.”  To the untrained eye, it almost looks staged.

As much as I may have criticism about it, it’s not necessarily a staged or pre-planned production.  Rather I think the nuanced word of anticipatory describes it.  Most preachers who whoop do it every Sunday and it’s just as standard as having a morning hymn or the recitation of the Apostles’ Creed.  For some that means that it is staged and not real.  For others its a cathartic release of emotionalism that may be needed.

My personal opinion is that it becomes homiletically irresponsible when preachers whoop out of habit without being aware of how their congregation is listening to their sermon.  By listening, I don’t just mean the auditory function of hearing sounds by the receptacle of the ear, but how are their digesting and processing the information in the sermonic moment. (Granted this opens the doors to how do we as a society understand preaching, but that’s for another blog post, more certainly, a book.)

As my preaching professor said in my Introduction to Preaching class, “the preacher informs the consciousness of the listener.”  Because many listeners expect the whoop, if they don’t get it they feel the preacher hasn’t preached, moreover, they don’t get that rush of adrenaline that high emotionalism can produce.  That’s why the article quoted Emory professor Dr. Teresa Fry Brown as saying

They [referring to preachers who whoop without a substantive sermon body] deliverdiabetic sermons. You have a shot of insulin, but you have to come back later…It’s like a candy high. They never look at the text; never any substance. All they give you is sounds.”

I’m quite clear that I marvel at whooping–as an art form.  In fact I get goosebumps sometimes when I hear someone do it who can do it right.  However, usually I’m most moved after a good sermon.  If I didn’t feel anything during the sermon, one doing vocal calisthenics  with a whoop and squalling into a microphone will do nothing to move me either.

If I can let you, the reader in on a little secret about being black in America: when a black person is interviewed on a national network such as CNN about a topic such as this, that one black person is the spokesperson for 37,000,000 other black folks in this country.  Let’s be honest, for that subset of whites and other non-blacks in this country who have little or no interaction with African Americans, such interviews and news stories become foundational in how they view various aspects of black culture be they negative or positive.  I’m certainly not suggesting that this portrays blacks in a negative light, but this story about whooping certainly does enforce major stereotypes about blacks being emotional in religious settings.

As I hinted earlier, it is my belief that in the Age of Obama, there has been this need for understanding black culture beyond a Dateline or Nightline special here and there.  I think this is because of the image of Barack Obama and Michelle Obama.  The image of a black married couple, outside of the fictional depiction of Clair and Cliff Huxtable, has not been prevalent in the social ethos of this country.  Prevailing images of blacks are usually not shown in positive or leading rolls in media outlets.  This ranges from primetime television show casts, images on the evening and nightly news, or even to Hollywood movie leads.

Then here comes Barack and Michelle.

As a result, certainly following the Jeremiah Wright situation during the campaign season of 2008, many Americans were left scratching their heads because Obama and his wife didn’t quite fit the image that they had imagined a black man.  That’s why such sideways comments were uttered even from fellow Democrats such as now Vice President Joe Biden and Sen. Harry Reid.

Mainstream media has long since diverted from having integrity in my own opinion.  They have become beholden to large corporate owners who certainly have a political agenda.  No longer are we getting our news from local newspapers with foreign bureaus or even our nightly news, but from some outlet with a 24 hour news cycle.  That’s why for CNN to portray this facet of the Black Church in America as it did surrounding whooping as so blindingly one dimensional makes me upset because I’m left wondering is this the best that our media outlets can do?

This is a time for us as a collective people to learn to think for ourselves.  In this technologically saturated society, information is at our fingertips literally. It doesn’t require us to traipse down to a library and search through dusty volumes of already dated material to learn some information, but a Google or Wikipedia search can do wonders for increasing one’s knowledge of a subject.

7 thoughts on “Mainstream Media Gets It Wrong Again: The Black Church in American Culture”