I reached way back for this Throwback Week post.  I was doing an internship in the northwest suburbs of Washington, DC during the summer of 2008 and its experiences certainly gave me a different perspective; a different worldview. This post was a direct result of that summer 2008 experience. I believe its content is still relative two years later. Sit back and enjoy. JLL

Yes, this post is as a result of my internship. 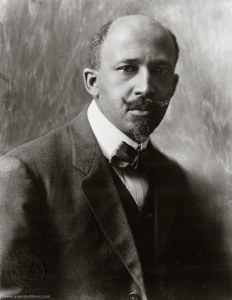 I always subscribed to W.E.B. DuBois‘ idea of “double consciousness” as he laid out in Souls of Black Folk and for the most part, I still do.  Just for a bit of context, check this clip out.

The history of the American Negro is the history of this strife, — this longing to attain self-conscious manhood, to merge his double self into a better and truer self. In this merging he wishes neither of the older selves to be lost. He does not wish to Africanize America, for America has too much to teach the world and Africa; he does not wish to bleach his Negro blood in a flood of white Americanism, for he believes that Negro blood has yet a message for the world. He simply wishes to make it possible for a man to be both a Negro and an American without being cursed and spit upon by his fellows, without losing the opportunity of self-development.

But, the dynamics have changed a century later as far as what culture, does what.  Of course the cultures I’m talking about are those of the white and black culture.  In 2008, that dynamic doesn’t even take into consideration the plethora of European and Asian immigrants, nor the significant Latino (isn’t that a wonderful catchall) population that lives and works in this country.  Be that as it may, blacks and whites still do operate in black and white and often fail to recognize that of Latinos and Asians (but clearly that’s another post for another time).

DISCLAIMER: Before one continues, I am not making this dominant-subdominant/superordinate-subordinate claim on the basis of inherent or biological claims, but rather as an interesting “blog study” on progressive culture in the past century.

Now, keep in mind that on this internship that I’m the only black person.

These few experiences just made me turn this thought of cultural dominance (and I use the word dominance loosely) around in my head as to who’s really on top.

Driving back from the retreat, the group was talking about movies and we were talking about Jaime Foxx’s “The Kingdom” and somehow we got on the topic of favorite soundtracks.  Well, I mentioned “Kingdom Come.”  For those of you who were just as ignorant as our group leader, “Kingdom Come” was a movie with A-listers…in the black community. It amounted to a Gospel comedy, perhaps a movie that paved the way for Tyler Perry movies.  Anyways…..when the group leader said “What movie is that?” and I said “Oh, Anthony Anderson, LL Cool J, Whoopi Goldberg are in it,” his response was “Oh it’s a hip hop movie.”

I quietly was cracking up laughing inside.

The other incident was that while on retreat, one of the other interns mentioned that he liked Kraft American singles as cheese.  So I just dropped a bit of knowledge about American cheese as we know it being the derivative of “government cheese” the good ol’ American by-product of whatever that was doled out during the Great Depression.  So somehow, I turned it into a joke about “government cheese” to which my joke fell flat when the intern asked “What’s government cheese?”

Well, for my white readers, “government cheese” is just one of those running jokes in the black community, so it was yet again another cross of cultures.

The next week when we went to a great DC establishment on U Street, Ben’s Chili Bowl, I had to go around the room and point out the self-appointed Pope of Blackness himself Tavis Smiley in a picture with Cornell West, and I really had to come up with a short mini bio of His Greatness Tavis realizing that I had NEVER been around someone who had NEVER remotely heard of Tavis Smiley.   And it just got me wondering that how often to white folk go to predominantly black establishments and see the pictures of Dick Gregory, Maynard Jackson , Julian Bond (those were the pics around the room in whom they were unfamiliar with) and wonder who they are and really don’t know just how big they are in black culture.  However, when we go to white establishments many uppity Negroes would do a pretty good job of doing the roll call of people on their wall.

Now, the cross cultural exchanges got a bit uncomfortable the next week when the group leader, who’s a few years older than me, was making a comment about a particular chair that was kind of old and said “that chair must have been forged by slave labor in the 1800’s” and I looked around the room for hidden cameras.  Now, during the retreat, I made it quite clear that I was what Michael Eric Dyson in Is Bill Cosby Right? Or Has the Black Middle Class Lost It’s Mind? calls “intentionally black.”  I used “black” when describing myself and my cultural definition and I did not use the PC African American.  Suffice it to say, I was just SHOCKED that he said that out loud.

And if that wasn’t bad enough…

…while we were throwing around ideas for an opening ceremony, among ideas like a 50’s Era Night, Hollywood Night, Ocean Liner Night, he suggested that we have a Redneck Night or a Deep South Night and I was just soooooo tragically appalled that I sarcastically suggested we have a Gone With the Wind Night to which they thought I was being serious and wrote it on the board.  I just say and said nothing, then he later suggested we have a Hip Hop night and I began preparing my speech as to the things so tragically and egregiously wrong with these ideas and how I was NOT going to actively participate in any of these events if they were among the final selections. (He also suggested a Prison Night where they would divide into groups cops and prisoners and allow the cops to “beat” the prisoners, and also a Mob/Mafia night where the gimmick would be something around a Five Families theme)

I sent a text message to one of the other interns who me and him had been exchanging glances ever since the “slave chair” incident and I said “If they somehow pick Deep South Night or Redneck Night, [my costume] I’m going to show up as Uncle John the Negro Slave.”

I’d dare them to deal with THAT!

And then I sent a later text that “And if they do Hip-Hop night, I’m going to show up in a wifebeater, with aluminum foil in my mouth and some shorts hanging off my ass and some all white air force ones.”

And my friend busted out laughing by himself because no one knew what he was laughing about just looking at his phone.

I’ve told all of these experiences to say this, as a black person in this country, I’m more aware of white culture than these suburban whites are aware of black culture.  I’d do a much better job of assimilating into white culture than the opposite.  Let me be clear, I am in NO WAY classifying the group leader as a racist–prejudiced yes.  But, honestly, if based on what I can gather from what he’s said that he grew up in suburban DC his whole life and his only interactions with black people were with “inner city youth” in Southeast DC (which is a whole ‘nother blog about this code word of “inner city youth” which really could be substituted with “poor black and Latino kids”) and the rest from what he probably watched on TV, well….could you really blame him?

I mean, he thought it was funny to show me the following YouTube clip:

When I told one of my friends about it, he said “Oh, he was trying to connect with you” to which I had to laugh because it’s probably true.

Again, to my point, blacks have always had to have this “double consciousness” to deal with that whites never were forced to.  I mean, let’s be painfully honest, if I sounded like any of the people in the above clip I would NOT be a member of this intern team (which I guess brings up the age old “sounding white” debate, which I’m simply here to debunk–I’m an uppity Negro and this is how I choose to speak and I’m not apologizing for it, end of discussion!)

Yet again, let me be CRYSTAL CLEAR, this is NOT a condemnation of the organization to which I’m working with or whites in general, or suburban whites, but rather a “blog study” (similar to a case study) from my view point.  I just think all of this is interesting and I think is clear evidence that we STILL have a long way to being a post-racial society, this one that we’re all claiming when we hear a Sen. Barack Obama.

So ultimately, which the dominant culture?  The one who doesn’t have to assimilate or the one who’s found out a way to operate in more than one world.  Usually the dominant object is the one that is the amalgamation of all things, not the one that is specifically just one.  PLEASE LEAVE YOUR COMMENTS!!!  I’m very interested to hear your feedback on this one.