Skip to content
Posted on September 9, 2010 by the uppity negro

I was actually joking around on Twitter earlier about the four major mythical HBCUs (historically black colleges and universities) that have permeated a certain section of black consciousness.  I was making the joke that I would want to send my child to either Hillman College, Mission College, Atlanta A&T University or Truth University.

Those institutions of higher learning came us in chronological order beginning with Hillman College debuting on  “The Cosby Show” being the mythical institution that Cliff and Clair Huxtable attended as did Cliff’s parents.  And it was the setting of the spinoff “A Different World” where the second Huxtable child, Denise, attended and the world was introduced to Dwayne Wayne and Whitley Gilbert.  Mission College was introduced to us in Spike Lee’s second foray into filmmaking with the cult classic “School Daze” where we got the quintessential HBCU dynamic from Greek life, to administrative politicking, to the sociological construct of the educated “Mission men” versus the others.  It wasn’t until the next millennium that the world heard of another HBCU by the name of Atlanta A&T in the movie “Drumline” where Devin, the show-off snare drum player moved to the dirrty Souf from New York to play for Dr. Lee.  This movie inspired by the “show band” style of marching band (as opposed to corps style) that is evidenced by many black high schools in the south and certainly by the HBCUs (particularly the HBCUs in the SWAC).  Finally, we all heard about Truth University in the movie “Stomp The Yard” which somewhat was an answer to “Drumline” that focused on the band, “Stomp The Yard” focused on the stepping aspects and Greek life that characterize many HBCU campuses.

On a grading scale, I’ll say how each of the four schools rank to me.

So here it goes, working backwards: 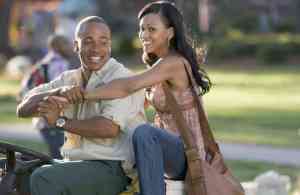 Let’s be honest, if Megan Good is going to be a student on the campus, this university definitely is going to make you think twice.  I mean, imagine being one of the high schoolers, 15 or 16 on one of those college tours from up north and the bus is driving through campus and you see someone like a Megan Good walking down the street or the Promenade.  You aren’t even thinking about education, just about being free to do what you want outside ya mamas house.

But the female to male ratio aside (although its hard to push that if Megan Good is there), Truth University has fraternities that aren’t just focused on outward appearances.  One of the problems that historically black fraternities and sororities face is an image and stereotype problem.  Every student of an HBCU can give the break down of stereotypes for each and every member of the Divine Nine–and purists still refer to it as the Elite Eight.  DJ also took his walk through Heritage Hall and was able to see the contributions of blacks and Greek life who had significantly contributed to African American culture, which was a moment where this school was presented as having a social and political consciousness.

Although I’m concerned about a board of directors and a president that still is focused on the image so much that they treated DJ the way he did.  These are the handkerchief head Negroes that get caught up in the minutiae and fail to see the forest for the damn trees.  It results in keeping blacks separated amongst ourselves.  It’s not a good look and something that I just can’t support.

Yet again, the siren status was held by Zoe Saldana who plays Laila.  I mean honestly, a lot of the freshman class young men are like Devon.  They automatically spot the power wielding female on campus from day 1.  She usually looks like Laila and is always visible; she’s a band dancer or a member of a prominent sorority on campus and is dating or at least being courted by some equally powerful alpha male who’s also either a member of a prominent fraternity on campus, or sits on x,y,z campus boards and has the ear of some higher ups in administration.

After being in college, I know that’s all well and good, but if I were picking a school for my child, I’d want to shy away from that.  But, I’m sure that’s the case on any college campus, so it is what it is on that one. 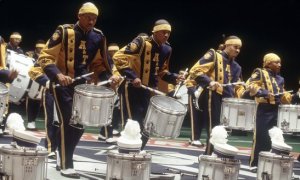 This would be a fun school to go to during football season because of the band and home games.  But, I want to know what else they got going on during the rest of the school year.  How are the academics if I’m going to send my student there.  And yet again, there is an administration issue here–a president more interested in the perception of a band toward a board of directors rather than letting the band director do his thing.  Honestly, if this is what the president is worried about then we have issues.

But, if my son or daughter was a big band geek, in the good sense, I’d have no problems sending them down to play for Dr. Lee.  He’s about the music and the quality of it all.  He seems to be level headed and clear- minded about his goal and purpose: “To be early is to be on time, to be on time is to be late,” and his famous “One band, one sound.”

Yet, at the end of the day, this school seemed more focused on the band than anything else, from the students to the administration.  That’s all well and good, but I do want my children to have some knowledge in their head by the time they leave and understand some of the deeper things in life.  Compared to Truth University, this school has no social consciousness, but seems to be about the glitz and the glamour.

This is a school that’s heavily divided on the deeper issues of life.

I think one of the most informative scenes of the movie, aside from the fulcrum last scene of “WAKE UP!” was really the scene that Dap and his friends encountered some of the locals and after they had said “you know what they said about Mission men” (which we all know was a direct swipe at Morehouse, lol) Dap still found the courage to tell them, “You’re not niggas.”  For me, this speaks to the independent courage of the students.

But, just as much as I’m comforted by the students, yet again, I’m troubled by the lack of leadership by the administration.  An administration that was ready to label Dap as a rebel because of his willingness to protest.  However, the administration is aware of the “plight of the HBCUs” and their perceived relevancy against a Catholic school for Notre Dame, Brigham Young University for the Mormons or Brandeis for Jews–and moreover, how alumni support those schools versus alumni of HBCUs.

Although, it seems the students don’t seem focused on their schoolwork.  There wasn’t a lot of studying going on at this school.  Certainly social and cultural awareness, but not classwork.  Nor interested professors.

Hillman is school we’ve known about the longest.  We know about Hillman’s students and we remember them fondly: Dwayne Wayne, Whitley Gilbert, Jaleesa, Ron, Walter, Kimberly and Freddie.  Then we were introduced to Gina, Lena, Charmaine, Terrence, Shazzah, Terrell and Dorian. And a cast of professors from Col Taylor, to guest spots from Jenifer Lewis as Dean Davenport and the late great Rosalind Cash as Dean Hughes. To other consciousness shaping adults such as Lettie and Mr. Gaines.

This was a school that focused on the academics and had a social consciousness that rivaled no one.  This was a school that was aware of the Gulf War in 1991 and also dealt head-on with the light-skinned vs. dark-skinned imagery and the “mammy” image on television for all of America to see.  This school helped shape young black minds and still had a social atmosphere from sitting around in dorm rooms, to fraternities and sororities and a football team.

Not to mention this was a school with pride.  They knew where they came from and what their focus was.  They represented diverse backgrounds from the Whitley Gilbert being the bougie privileged child there on legacy, to Dwayne Wayne just being a nerdy brother who was able to make it, to Lena who was from the streets and let everyone know it, to the bohemian individualism of Freddie to her boyfriend Shazzah who was all about the Afro-centric movement–now THAT’S an HBCU.

I’d have to go with Hillman because Hillman students represent a diversity of students and professors that’s not represented by the other schools.  While Truth and Atlanta A&T certainly present a heavily monolithic view of HBCU representation, even Hillman stops at the dichotomy.  Hillman goes far enough to show the truly polychotomous existence that is many HBCUs.  Certainly, at the HBCUs that are in less diverse atmospheres (such as the ones in the rural south) reflect as such, but the HBCUs that are located in major cities certainly see an influx of diversity.

I would also choose Hillman because they seem to have an administration that wasn’t about coddling to the interests of the past.  One major theme in the schools of Truth, Atlanta A&T and Mission were administrations that seemed focused on the wrong thing. All film directors made sure to make it clear that the administration was off the mark completely when it came to dealing with direction of the students.  I thought it was an interesting critique particularly given the real-life parallels that many of us experience.

2 thoughts on “College Bound: The Mythical HBCUs of Movies and Television”