Skip to content
Posted on August 21, 2010 by the uppity negro

I’ll admit it, I’m a chronic sufferer of being in the “friend zone.”  Cue the “dark and stormy night” music with a crack of thunder and bolt of lightning (and just imagine those sounds effects every time I write “friend zone.”  Look, there it is again.)  Fellas, you’ve been there at LEAST once, for some of us, we’ve lost count.  But its those dreaded words no self-respecting black male wants to hear “oh, I just want to be friends.”

These are the ones that treat you like one of their “girlfriends” calling you up and talking about they other man issues–but calling you at like booty call hour times.  So you get to thinking, well, she talking about man issues, maybe she’s feeling some kind of way, and then eventually you step to her and BOOM she says “oh, I just want to be friends.”

Or you chillin’ in their room on campus or at their apartment and you’re staying over all hours of the night, and you finally get up enough nerve to make a move.  I mean you figure if I’m over here all hours of the night, she look good, got a decent head on her shoulders why not make a move.  Or better yet, you “sneak” on to Spelman’s campus go take the broad some Popeyes chicken because she asked for some, go up stairs, hide in her room because they doing room checks, then come downstairs, post up outside by your car, and get kicked off Spelman campus by some butch who look mad at life and then they still say “oh, I just want to be friends.”

Oh. Sorry. Maybe that last part was just me.

Anyway, you get my point.  Its always the dreaded “friend zone.”

It’s somewhat baffled me over the last few years because we sit up and we hear all of these stories from these State of the ______ (insert college or random black female audience intended event) Woman events and believe it or not there are actually black men who listen to what these women say as far as what they’re looking for in a man.  The sad thing is that up until about that Spelman College incident, so about 23 for me, I actually believed the bullcrap that women say in public.  Let’s be hoooooonest: black women want a professional thug.  We’ve heard all kinds of formulas as to how and try and get it, but at the core they want this perfect hybrid of professionalism and hardcore thuggery that exudes this primal and unrefined image of masculinity.

That’s why we hear about the “reformed thug” image or the “former bad boy” that women try and pick up and actually wife these black men.  But, see there’s a flaw and a major flaw at that: these women get in these relationships and they don’t work out!

You shouldn’t be.  You know why? Because that perfect union of professionalism being a lawyer or doctor or whatever legal six-figured salary doesn’t jibe well with a former life of being a d-boy.  The only thing I can think sadder than women chasing after the professional thug are the men striving to be the professional thug.  I’m aware of way too many black males who are in college and still trying to hold on to their d-boy ways.  Or even the weird, and I mean very weird aesthetic I observed just yesterday driving down west 79th street seeing young teen throwing up gang signs across the street at each other–but you had on fitted jeans and a bright Hollister t-shirt and rocking some Chucks.

Look, fashion and standards of beauty (in the philosophical sense) change with the zeitgeist of the social climate, but it does raise a question as to what is it exactly that these black women are seriously looking for.

If I can be painfully transparent, I seriously got a self-esteem complex from the number of females who pulled the “oh I just wanna be friends” line on me.  (And no I wasn’t running around trying to holla at the alpha-females on campus who were so stuck up it was vomitable, just in case you were wondering.)  And I reasoned that if females had a certain standard of what they looked for physically in a man, then what was preventing me from doing the same.  Nonetheless, I really went through this “I’m ugly” stage just because of the rejection back in college and early grad school years. 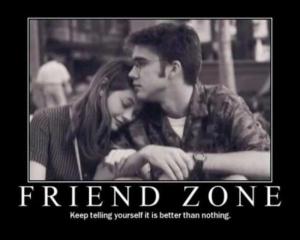 But, men, if you find yourself in the dreaded “Friend Zone” the following may be some reasons why:

I know that comes off as tongue-in-cheek, but I’m dead serious.  Black women have a very interesting perception of masculinity, and one that I think results in cognitive dissonance: they say one thing, but act another way.  And even go so far as to get married and then when the marriage isn’t the cakewalk they expected, they’re ready to bail on the man as if they can do better.  And I’m not talking about in instances of verbal and physical abuse, but after the honeymoon is over and the two have been together for five years or more.

Somewhere, the perception of black male masculinity got warped severely: gangsta life got celebrated and actually finishing high school with the diploma rather than a G.E.D. program fell to like number 39 on the list of things to do while living the hood life.  Gangsta life and its twin siblings of “being ghetto” and “keeping it real” somehow reified black urban culture in many instances, so much so that “keeping it real” as abstract as it sounds is in fact a real concept.  It translates into these not so positive images of what we see in the opposite sex: women say they want the doctor, lawyer, accountant, but they’re still attracted to the tall, basketball player looking guy waiting on the bus on 79th and South Chicago.  What they really want to do is take the guy standing on the bus, put him in the doctor’s office and put a suit on him and walk around with them: its all about status.

Don’t get me wrong, wanting a status symbol on your arm is a two way street, I can more than admit that.  But, I think a primary cause why some relationships fail is because the individuals aren’t honest with themselves. Black women want a man with status on their arm.  Status comes in many different forms, please believe, but all of them deal with outward appearances; cars, houses/condos, land, height of the man, does he work out, what kind of job does he have, what family does he come from–all of those social forces that lead one to believe you have to have that.  Honestly, if a woman makes the following statement “I don’t care about the car, or what kind of clothes he wears, just as long as he’s good-hearted and good person” SHE’S LYING THROUGH HER TEETH!!! If she believed that she wouldn’t have had to qualify the statement by even mentioning the car or the clothes.

And if you think all of this is bollocks as to why you’re still in the friend zone, maybe its because she doesn’t think you got good D-slangin skills.

And aint much you can do about that unless you get enough cohones to just whip it out on her.

48 thoughts on “Why You Stay in The Friend Zone: A Message to my Fellow Black Men”

Leave a Reply to Gregory A. Butler Cancel reply