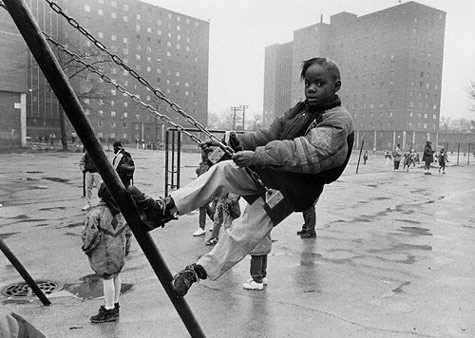 My previous post about the media’s love affair with Chicago and it’s current violence and how it’s linked to current President Barack Obama led me on a journey down a dark corridor of my hometown’s history of violence just in my life time.

I had intended to call the names of some of the young who had been killed and while trying to remember the name “Yummy” Sandifer, who’s full name was Robert Sandifer, my 25-year-old mind was yanked back 15 years into the dark and dismal stairwell of hopelessness, much like the one Girl X was found, that was the late 1980s and early 1990s.

This morning I stumbled upon the grim statistics that showed that Chicago, like much of the rest of the country saw a spiked increase not just in crime, but murder victims that were closing in on the 4-digit mark.  The blood curdling statistics however was that as high as 15% of the 929 murders in Chicago in 1994 were committed by persons between the ages of 14 and 16 and this number was down from 943 in 1992.

In 1992, Dantrell Davis was shot by a sniper’s bullet in the morning hours as he was walking with his mother to school.  Gone. Just like that. Like a candle in the wind.  The rest of the nation was forced to mourn the innocence of a seven year old on the way to school.  I don’t know why I happened to remember this name, but I think it was because as the same age as the victim, I remember hearing the name Jenner Elementary, which was the school in Cabrini-Green where Dantrell was attending.   Even six years later when I started high school in Lincoln Park just north of Cabrini-Green, I remember driving down Halsted Street and passing Division Street looking to the right and still having memories of a seven-year old from years earlier gunned down while walking to school.

The city tried to figure out what went wrong, and how could this happen.  But Dantrell was only one of 61 other children killed in the calendar year of 1992.  Yes, 61.  Such stark numbers pointed not to a pathology of a people, but a failure of a system.  The system had failed for Dantrell’s shooter Anthony Garrett where he felt it was okay to spray a walkway of people only to hit one person, Dantrell Davis and kill him.  This incident and senseless murder did nothing but lay down a foundation of a cycle of violence that begets violence.

I remembered the name Robert “Yummy” Sandifer vaguely from my youth.  More so that it was a name associated with a murder and a kid at that.  I mainly remember it because of the last name of someone at our church and my mother said “Wasn’t that the name of the boy Yummy Sandifer that got killed?” and she shuddered at the thought.  Probably at the thought I was was Yummy’s same age and that very well could have been me.  This was one of those crimes, wrought in the cycle of violence that pervades violence that captures the news cycle but until the funeral is held.

This young one, faced abuse at the hands of his mother even before his 3rd birthday and was in and out of the juvenile detention center, and ultimately by the age of 11 had been arrested countless times, but because of his age no prosecution to get him off the streets could be done.  In a gang initiation, shoots another girl on his block, and then in fear of being turned in, fellow gang members shuffle him from house to house.  Finally, a fellow 14 and 16 year old brother take him out and shoot the 11 year old execution style from behind.

Such a horrific story provided the entry paragraphs for a Time magazine article in September of 1994 entitled “So Young to Kill, So Young To Die: The Short Violent Life of Robert ‘Yummy’ Sandifer.”

On a bright September afternoon last week, the mothers of Chicago’s South Side brought their children to a vigil for a dead boy they had never met. They wanted their kids to see the scrawny corpse in the loose tan suit lying in a coffin, next to his stuffed animals, finally harmless. The big kids dragged the little kids up to look at the stitches in his face where the bullets fired into the back of his head had torn through. The only picture the family could find for his funeral program was a mug shot. “Take a good look.” said the Rev. Willie James Campbell. “Cry if you will, but make up your mind that you will never let your life end like this.”

Parents hoped to haunt their children; maybe fear would keep them safe. Lynn Jeneta, 29, took her nine-year-old son Ron. If he got scared enough, she decided, “maybe then he wouldn’t be lying there himself one of these days.” She pushed him right up to the coffin. Ron tried to stay calm. “Some kids said Yummy looked like he was sleeping, but he didn’t look like he was sleeping to me.” What exactly then did he look like? “Kind of like he was gone, you know?” His composure melts. “When Mama pushed me forward, I thought I was going to fall right in the damn coffin. That gives me nightmares, you know? Can you imagine falling into a coffin?”

As I was entering the fourth grade, another young black male was getting buried.  This crime so horrific and such a flashpoint for inner-city violence and all that is wrong with America, Yummy Sandifer will live in infamy because he even has a full Wikipedia entry!

The story of Eric Morse in the same year also gripped the nation.  Less than two months after the death of Yummy Sandifer, Chicago was gripped by the death of five year old Eric Morse who was dropped out of the abandoned highrise of Darrow Homes just south of Ida B. Wells housing developments.  It was a 10 and 11 year old, one by the name of Jesse Rankin who participated in this interview just two years ago after growing up in jail.

Or as the years went on, Chicagoans couldn’t forget the story’s of Girl X, a nine year old girl who was found nearly dead in a stairwell in Cabrini-Green having been poisoned, raped, beaten, graffitied and strangled, left for dead in 1997 or the Ryan Harris murder in Englewood in 1998.  And since I’ve been gone, the names of kids such as Starkeisha Reed and Blair Holt or even an Aiyana Jones fill our memories.

The ultimate question is why.

Why does all of this happen? Why are innocent children, even in the case of a Yummy Sandifer, left to kill and be killed as such?  Why are the perpetrators of this violence kids themselves?  What happened?  What went wrong?

Actually, nothing went wrong.  This is actually going according to plan. Particularly in the cases with Eric Morse and Dantrell Davis that took place in housing projects, the grinding poverty that was producing poverty places people at a precipice of having nothing to lose.  This nothing to lose mentality allows those that live in such conditions to rationalize even at 10 and 11 that it was normal to hang a five year old kid outside of the window, and even if you dropped him, no big worries.  That for an eleven year old, that it was okay for him to be a menace to the neighborhood, to a point where one grocery store owne went on record saying they “should have hung him in the middle of the street.”  This nihilism, utter sense of hopelessness that has black and brown faces at the bottom of the well has me saying Goddamn America.

Goddamn America for perpetuating a system that keeps blacks as a permanent underclass.

Goddamn America for allowing crack and cocaine to enter black communities–as if we owned planes that was carrying the drugs from outside of the country into our own.

Goddamn America for still not apologizing for slavery.

Goddamn America for perpetuating the myth that we are in a post-racial society when still disproportionate numbers show that blacks and Latinos are lagging behind in education, and in homeownership numbers.

Goddamn America creating a culture of apathy and nihilism.

Goddamn America for thinking that we can go overseas and commit crimes against humanity, but get indignant when the same terror hits our own backyard.

Goddamn America for being an empire.

“Well, how can you goddamn America and you live here too Uppity?  Love it or leave it.”

I hear you, and I understand you, but the moment we fail to realize our complacency in a system that has left our country with entirely too many “least of these” than should be, then we can have that conversation about “love it or leave it.”  Goddamn America for having an emblem synonymous with the American empire with the words inscribed on it “Give me your tired, your poor, Your huddled masses yearning to breathe free, The wretched refuse of your teeming shore. Send these, the homeless, tempest-tossed to me, I lift my lamp beside the golden door” and still many are locked up in jail, tossed out onto the streets, and have been so tired that they don’t know what rest is.

The phrase “Goddamn America” contrary to popular opinion is not some colloquial curseword for the sake of getting one’s sermon played in soundbyte loop, but rather a resignation of reality.  It’s really a way of placing the situation back in the hands of God to indeed do something about the situation.

So I say to God, to damn America, because we’ve missed the big picture.  Our myopia will be the ultimate death of us.