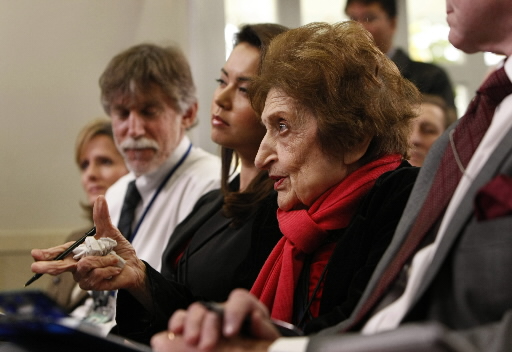 Look, I’m not always the biggest fan of our Helen Thomas and how she’ll ask a question that’s slightly off topic.  Case in point, she’ll ask about Afghanistan and the press conference is about the Gulf of Mexico Oil Spill, but to be true to my inner skeptic, let’s keep it one-hunned, she asks valid questions.

Its much like one of my professors who has engaged deconstructionist theory to the n’th degree.  He would ask questions about the text that none of could have seen coming a mile away, but they are phrased in such a way that the logic is really flawless.  What happens is what I’m now going to dub the Jeremiah Wright Effect.  One says comments that are so painfully on message that the zeitgeist of the people is not able to hear it and digest it because of the tools of uncritical discourse have been laid at their feet.  Certainly Jeremiah Wright isn’t the first, nor will be the last person that has said things that have and will be totally misconstrued in the public eye concerning race or religion, but he has been the most vilified–at least in my lifetime.

And here we have Helen Thomas, the Ancient of Days of journalism who made the following statement:

Get the hell out of Palestine…Remember these people are occupied, and it’s not their land…they should go home.

See, Helen Thomas didn’t make her statements in a vacuum, but I think made her statements out of a 67 year career in journalism starting in 1943 and actually after being an older woman who had seen and lived a lot.  And her statement came on the heels of Israeli forces shooting a pro-Palestinian flotilla trying to send aid to Gaza forces and breaching the Israeli naval blockade of Gaza.

But, guess what this is nothing new for Helen Thomas.

She’s had a history of asking the “tough questions” and certainly in the later half of this century, and under the numerous pro-Israel White House administrations, including the current one, her questions have always been outliers.  Check the following quote from the Washington Post about Thomas:

In 2002, Thomas asked Fleischer: “Does the president think that the Palestinians have a right to resist 35 years of brutal military occupation and suppression?”

Four years later, Thomas told Fleischer’s successor, Tony Snow, that the United States “could have stopped the bombardment of Lebanon” by Israel, but instead had “gone for collective punishment against all of Lebanon and Palestine.” Snow tartly thanked her for “the Hezbollah view.”

Mark Rabin, a former freelance cameraman for CNN, said that in a 2002 conversation at the White House, Thomas said “thank God for Hezbollah” for driving Israel out of Lebanon, adding that “Israel is the cause for 99 percent of all this terrorism.”

The Daily Caller Web site noted that during a 2004 speech to the Al-Hewar Center, a Washington-based Arab organization, Thomas likened Palestinian protesters resisting the “tyrannical occupation” by Israel to “those who resisted the Nazi occupation.”

A handful of journalists questioned her role over the years. In a 2006 New Republic piece, Jonathan Chait accused Thomas of “unhinged rants,” noting that she had asked such questions as: “Why are we killing people in Iraq? Men, women, and children are being killed there. . . . It’s outrageous.”

Let me show my hand early and say, frankly I agree with Helen Thomas.  I don’t know about the feasibility of the “going back home” statement, but hell, what do you expect when a international governing body comes into a land and says to a people already occupying the land and tells them that this land is no longer theirs, but someone else, specifically the Jews.

And frankly, the reasons for this land were based on religious and Tanakh principles, which pisses me off even more.

But, its right there in the Hebrew Bible, and many evangelicals don’t even question the story, and black Christians don’t question the story either even though it tells the story of our own holocaust.  We read the story of Joshua and the children of Israel boldly marching into the occupied land of the Canaanites and we easily side with the victors because of us living under the guise empire of the Western Culture and we add God to it and say that God was on their side.

Isn’t that the same story we heard when European imperialists came to the shores of the Americas?  That God was on their side and that they were occupying the land in the name of God and Christianity?

Once we get past the load of bull that has been shoved down our throats like Biff Tanner in the Back to the Future trilogies, I think many of us would have an outlook similar to that of Helen Thomas and Israel.

I will NOT buy the argument that Thomas or anyone else who makes “anti-Semitic” comments is racist, but hell, have we really gotten to such a pro-Israel stance here in America that even when Israel takes a dump we lift up the diaper and say “Awwww, look at the poo-poo” and smile?  Just because one criticizes a Jew doesn’t make them guilty of a hate crime.  Al Sharpton used to have on one of his intros to a segment “If you say something about a Asian person, hate crime; say something against a Jew, hate crime; say something against a black person, freedom of speech.”

Seriously, I really want to say to those blowing up about it, “So the hell what? She disagrees with the current policy toward Israel.  Big friggin deal.”

As the guy in the clip, Danny Schechter, I think what we have here is a co-opting of mainstream media, particularly the White House Press Core which seems to be the most docile of journalists I’ve ever heard (not saying I’ve heard a lot).  But, yes, in the grand scheme of things, presidents, all of them, get lobbed softball questions.  If, and only if, FoxNews wasn’t known for their yellow journalism tactics and techniques, I’d give them kudos for asking off the wall questions, but their intent is to trap the president, but Thomas’ questions have always been in the interest of journalism.

So, I want to know where are the Libertarians that are so damned interested in First Amendment rights?  They should be flocking to her side in her defense.

Don’t be fooled, Libertarians are just secretly jealous of the Tea Party Movement and the press they’ve garnered.

We need to be honest in this country that there is a force that is out there that is hellbent and intent on quelling free thought.  I know it’s cliched, but the type of response that her comments have received seem like some type of Orwellian groupthink depicted in Animal Farm or 1984.  The problem this poses for me goes far beyond the normal discourse that I usually propose, but for me this goes to the core root of the problem in this country: it’s an empire and we need to view it as such.

Empires put out propaganda, and for us, when we hear the word “radical” we only view in such contemporary and short-lived political memories.  For us, we wouldn’t view radical in a historical context, but rather revisionist.  The empire has allowed us to believe that Martin Luther King wasn’t a radical, or that even the American Revolution wasn’t radical, but by any definition they were because they went against the system.  Now “radical” exists as a code word for anything that’s anti-American, or should I say, anti-Empire.

What I really didn’t like was that they just dismissed her comments as her being the crazy old timer that no longer has a filter.  And that’s what happened with Roland Burris and certainly with Jeremiah Wright.  I hate when we dismiss real comments.  Seriously, we live in a country that would take more seriously the comments of Warren Ballentine toward Juan Williams about “go back to the porch” or the diminutive words that get spewed on a daily basis from both sides of political punditry, than really dissecting the words that Helen Thomas uttered.

No, she knew what she said.  These were not the words of someone with no filter, but rather someone who’s filter knew how to get rid of the bullshit.

Once we begin to see it as such, then perhaps the scales will fall from our eyes.  Until then, just be prepared to keep falling for the ol’ Okey Doke each and everytime.  Then one day we’re all gonna look up and try and figure out what happened.

Was Helen Thomas wrong for her comments?  Were they just inappropriate or flat out wrong? Does freedom of press and freedom of speech play into this?