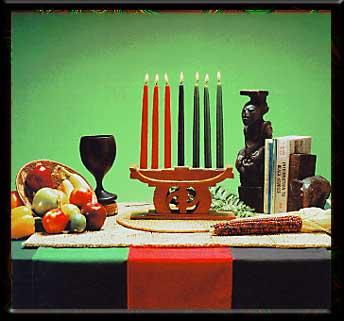 Personally, I hold Kujichagulia, self-determination and the first red candle (red representing the blood shed of our ancestors) to the right,  in high personal regards.  For me this is one of those self-explanatory things; it amounts to common sense for the most part.  Because of that, I don’t have some long diatribe with which to pull out various theorems and pontificate exponentially for the sake of building and argument like I did with regards to Umoja.  Simply stated: I think the recitation above in the italics says exactly how I feel.

It’s time out for allowing the media to dictate and influence our consciousness. We allow what gets said on CNN, MSNBC and God forbid what FoxNews reports to infiltrate our minds and provide the rhetoric with which we talk amongst ourselves in our barbershops and beautyshops and around our dinner tables.  As a result, the media dictates the language with which we use to define and name ourselves.   This moves from not just news media, but also from generally what gets promoted on the television through commercials and various opiate programming.  And for those who are still lost, I’m specifically talking about programming on BET, MTV and VH1 just for starters. When our young ones take their intellectual cues from what gets said on 106 & Park from Terrance and whoever the latest female host casualty is and not to mention the top ten music videos, we have a problem.  I’m really not against taking certain fashion or other cultural cues from 106 & Park for instance, but one must be aware the level of influence of outside factors from the music and from what gets commercialized on the television.

As if allowing others to define and name us as a people and as a community, we allow others to speak for us.  This is multifaceted because just because someone is black doesn’t mean that they speak for us either.  Using some of the ideas in my previous post about Umoja, seeing as how we are divided in many regards, we need to be aware that one person does not speak for the entire black community.  Generally, I would say that it seems that a fair number of black people are aware of that, however, this message does not seem to have made it to the non-black citizens of this country.  Well, let me serve notice for those who are ignorant: one black person does NOT speak for the entire black race.  Too often whites view blacks much like Chris’ homeroom teacher in “Everybody Hates Chris” and use every stereotype in how they interact with us.

Black media pundits are always put in the awkward position of having to speak on the “black issues.”  We are forced to do this doublespeak: we can’t speak as though we’re the sole arbiter of black news, but by the same token we have to bring up issues that are specifically germane to many black communities across this nation and that many non-whites are totally ignorant of their existence.  As a result, “speaking for ourselves” becomes a tightrope act.

That being said, let us be conscious and aware of what we are defining and naming when we speak.  Sadly, we still live in a country that when we speak, we speak for an entire community.  Yet and still, when we speak in intra-racial venues, we need to let our rhetoric empower each other and provide the consciousness that positively defines and names who we be.

What are you’re thoughts about the black community being able to have self-determination?  Do we adequately define, name and speak for ourselves–is there a need to?  What are your personal reflections about Kujichagulia?