Skip to content
Posted on July 3, 2009 by the uppity negro 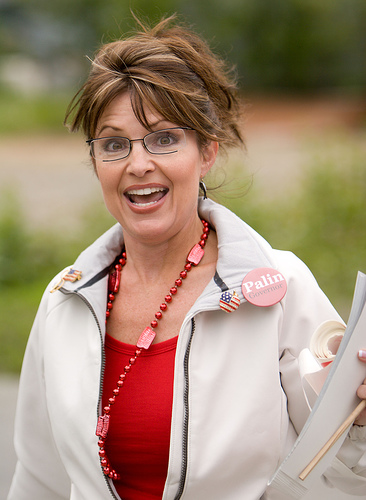 So, it just dropped on the news wire, so to speak (clearly we have internet now with telephones and emails and Blackberrys) but that Alaska Governor Sarah Palin, former Republican Vice-Presidential candidate with Sen. John McCain, will resign as of July 26th from her office as Alaska Governor.  This is the CNN story from AP:

Gov. Sarah Palin announced Friday that she will step down as Alaska’s chief executive by the end of the month. She will not seek election to a second gubernatorial term in 2010.

Palin said she was transferring authority to Lt. Gov. Sean Parnell, who will be sworn in at the Governor’s Picnic on July 25.

A Republican source close to her political team told CNN’s John King that it was a “calculation” she made that “it was time to move on.” The governor’s “book deal and other issues” were “causing a lot of friction” in her home state, the source said, adding that he believes she is “mapping out a path to 2012.”

As the 2008 Republican vice presidential nominee, Palin has been considered one of the front-runners for the GOP nomination in 2012. Her decision not to seek another term as governor is sure to stoke speculation that Palin is seriously eyeing a run for the White House.

In an interview last month with CNN’s Wolf Blitzer, Palin said she was unsure about her re-election bid because she needed to focus on her state and her family.

“No decision that I’d want to announce today,” Palin responded.

Lemme put it to your like this:  she was going to have one helluva up hill battle in her home state running against whomever her opponents were. I’m not sure if they have primary elections up in Alaska (I mean, who really knows about Alaska politics down here) although I’m sure they do, and I’m sure she would have had a hard time running in her own party as the incumbent, let alone against the full field of candidates.

But this is from the person who I’m not convinced even voted for herself in the general elections last November. Check 0:35.

That being said, someone told her it wouldn’t be a good look running for president and you can’t even run as a gubernatorial incumbent in your home state and win.  Maybe finally folks’ll see her for who she really is, a political charlatan who’s clearly representing a minority of people in this country; by all accounts she lost it for McCain back in 2008 (though not as quite as much as Obama won it in 2008); she was a highly polarizing character that brought out some crazies that had been lurking in the background in this country; above all she’s out for number one and personal gain and not the common good.

That she’s working on her memoirs or her book is absolute bollocks to me!

Whatever she has up her sleeve for her personal gain, I hope it blows up in her face big time for the sake of the citizenry of this country.

Do you think she has an angle with this random resignation?  Or is she hoping to cover-up something that’s going on behind closed doors that would blow up big time in her face if the national press got a hold of it?  Is she just generally a fool or is it just me?