Skip to content
Posted on March 6, 2009 by the uppity negro 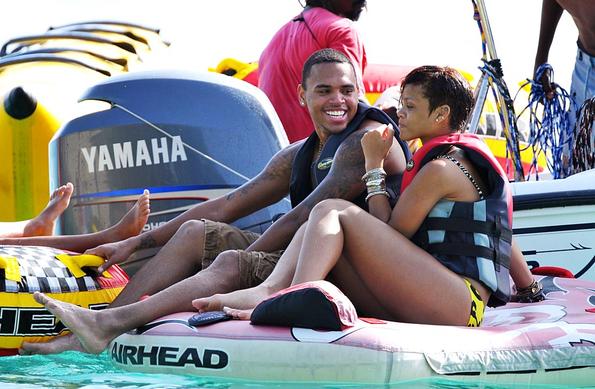 It’s my understanding that the whole thing started over a text message.

Back in the day this would have been the mysterious “little black book” or a random slip of paper that fell out of a pocket at an inopportune time with seven random digits with a dash between two of them–a phone number.   But, it’s my understanding that Robyn Rihanna Fenty, most commonly known by her middle name Rihanna, had discovered a text message from another lover woman and went off on her boyfriend Christopher Brown, who we’ll just call Chris Brown for short.

As in the case with former Gov. Rod Blagojevich and the scandals that surrounded him, and the fall from grace of my beloved U.S. Senator Roland Burris, I prefer to keep my judgments to myself until charges have officially filed, so seeing as how Chris Brown was officially charged with two felony counts of assault likely to cause bodily injury and making criminal threats, I feel released to say my piece about this.

I’ve always wondered what should be the male response to something like this.  It’s always easy to say the man was wrong and he shouldn’t have hit the woman.  As a society, at least in black culture, we’re beginning to add on that it’s not okay for a woman to hit on the man as well.  But I do want to pose this question to my female readers: what in the female psyche prompts for a woman to become physical with a man, unprovoked?

Now this isn’t the case where Rihanna had gotten violent with Chris Brown, but rather she took the keys out of the ignition and sat on them, after he allegedly had just drove down the street punching her.  WHY WOULD SHE PROVOKE THIS CRAZY BOY ANY FURTHER?!?!?  I’m not at all making the jump that “she had it coming” but rather, why do we always absolve victims of 100% responsibility.  She had perfect agency to get the hell out of the car and immediately press charges.

So, when I said that to two friends of mine, one female and married and another male soon to be engaged (or so we all think, he’s been going out with the same girl for a good lil’ minute now) the male friend responded, “All she was thinking about was some other chick who was trying to get her man,” and male female friend said “YOU EXACTLY RIGHT!”

Now, let me be a male in this situation and tell you how I feel about this as a man:

1) Chris Brown should not have put his hands on her under any circumstances unless she was knocking the crap out him with a frying pan and his immediate life was in danger.  In such cases, as Dr. Phil said earlier this week on “The View” that he should then exercise his legs and leave because in this society, the law is NOT on the side of men.

2)Rihanna should have taken agency upon herself to get out of the situation as soon as possible and not have further provoked Chris Brown by sitting on his keys.  Women MUST regain power and put their own life in the front.

3)Women need not to provoke men.  That means don’t be telling your man by telling them they “aint good for nothing,” especially if they actually are getting up going to work everyday.  And most certainly don’t hit your man unprovoked.  The idea that “he can’t hit me because I’m a woman” is bullcrap.  It happens all day everyday and results in death at times.

This is not telling women to be submissive to their husbands out of fear of being beaten.  I guess what I’m saying is use common sense.  Women should know when they’re brow beating or nagging their men to no end.

4)Men need not hit women to work out their own frustrations and issues.  Aside from those that have other issues going on, such as psychosis and what not, violence is often the expressed frustration of a situation.  Violence is at the end of a spectrum of dealing with problems and issues for many people once the reconciliation and communication process has terminated itself for whatever reason.  Wives and girlfriends who suffer silently for years from physical abuse from their respective lovers perhaps may be the men who suffer abuse from their bosses at work, or taking the movie Dolores Claiborne, just a man who was barely making it and had a pathology of issues that never got worked out.

Sometimes it’s nothing a woman can do to prevent herself from being beat.

But then, there are women who had watched their mothers’ being beat and have in turn gotten with men who beat on them as well.  Where for them, this was a part of the relationship process, and I daresay part of the love process.  Now, I read on another blog that one young black male commented why is it that we’ve created a culture where the “bad boy” image or as another of my friends said the “gangsta boo” image is lifted above that of the clean cut guy who’s steady and predictable–and doesn’t hit their woman.  Then we act incredulous and have the same damn conversation when this crap happened with Juanita Bynum and Bishop Thomas Weeks.

This isn’t a foreign topic to those of us in the black community, but yet and still the same scars are being opened for women who’ve suffered the beatings a raving male lunatics.

If I can park here for a moment…

I wonder if sometimes if the hurts we experience prevent us from making the best decisions in the long run?  Think about it, right after we’ve been hurt by someone, we really want revenge, most of us at least.  We want that person to experience what we experienced–the hurts, the fears, the anxieties, the pains, the sleepless nights etc. multiplied exponentially.  Often times, that does nothing to prevent it from happening to other people by other persons; all revenge does is carry out the “eye for an eye, tooth for a tooth” mentality which ultimately renders society blind and unable to be nourished.

Also, the hurt prevents us from accepting help.

Granted I’ve never been a woman beat by a man, so I’ll concede this argument if necessary, but I’ve been deeply scarred emotionally by various people throughout my life for various reasons.  But I know that right when the hurt comes to the surface, it’s easy to shut down and emote to others “You don’t know what I feel like, so saddown and shuddup” and I failed to enter dialogue with those who possibly could help me and give me a different perspective.

In case that was too veiled, all I’m saying to women is to not turn into penis haters, but to let men in on this dialogue without any stipulations.

My mother told me her mother told her that a man should only end up hitting you one time because after that you need to leave.

Leave your comments and feedback down below, I’d love to hear what you have to say about this.

One thought on “Things I Learned from Chris Brown and Rihanna”