Skip to content
Posted on February 15, 2009 by the uppity negro 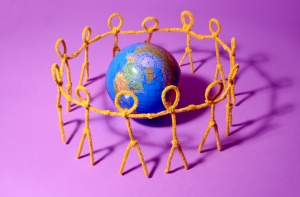 Last year, around finals, I was in the barbershop for about two hours.  Partially because my barber always runs about 15-30 minutes behind schedule (not a big deal, I’m used to it) and my friend was in the chair behind me.  So they all know that we go to “that preacher school” up the street, my barber knows I’m a musician (they all think I play drums, HAHA) and it was the end of the semester so we had mentioned finals.  The barber in the next chair was in on the convo because those two are the only original barbers since I started going in 2007.  He moved down here from Chicago–West Side (**rolls eyes**) and the usual barbershop banter continued.

The next day I was driving down Northside drive stopped at the 10th Street light headed to Fellini’s on Howell Mill Road and this dark black Magnum pulled up.

I could tell the dude in the car was staring hard at me.

Well, this was Atlanta, and this certainly was NOT the first time that had happened, and among the more mild stoplight experiences I’ve had.  I saw the guy had on shades, even though it was clearly dusk and there was no need for them.  Then the window rolled down and I was prepared to run the red light when the door opened.  Now the window on my front passenger seat needs a new motor, so I don’t open it FOR ANYTHING resulting in me having to use the back passenger side window.  I looked up and saw it was the other barber from one chair over, hollering like he was from the West Side of Chicago asking me “Why you aint studyin’ for your finals?!?!?”

It was a quick joke and we both pulled off.  But from that light, I felt a surge of pride almost.  It was one black man to another that we had created that bond of community.

Now understandably the barbershop (or beautyshop) is one of those sacred spaces where intimacy unrealised takes place.   I mean, it’s the place where a woman is allowed to touch another woman’s face–manno a manno in the barbershop, so it’s not uncommon when relationship ties happen.  For instance, I know that my barber up in Chicago cheats on his wife if the right woman at the right time comes by–and he’s got more than one kid.  Not the biggest secret in the world, I’m sure the whole shop knows that, but still there is that sacred space in which community has been created.

I made a connection with that story of my barber the night I had my annual Kwanzaa Get-Together at my house last Christmas break for the night of Ujamaa, Cooperative Economics and of course the discussion broached the subject as to why blacks have a tendency not to deal with other blacks when it comes to business deals.  Uppity Friend retold a story of a catering service she used earlier that year for an event and just how atrocious the service was and the absolute lack of professionalism–something that she never experienced when using a non-black service.  My answer as to why that happened was a lack of community.

Community cares about one another.  Far too often we, black folk, don’t care about one another.  We don’t take time to make a vested interest in each other using our own gifts and talents.  For instance, on campus there are others who make a plea that pastoral care and counseling is the key to ministry, I beg to differ.  Even though my concentration is not that, I don’t make the argument that my field is the only way to go, having that mindset does nothing but set us at odds to with each other.  I just know for a fact that pastoral care and counseling is NOT my strong point, whereas preaching is something I’m interested and more inclined to do.

Community also builds up one another.  Too often we, black folks, don’t do anything for one another.  We definitely assimilate into the capitalist, individualistic mindset of the dog-eat-dog mentality that includes the “I got mine, now you get yours” conservative bullcrap that put Joe-the-Plumber in the limelight.  This ideology is counterintuitive to how we made through slavery, segregation and Jim Crow: I survived, because we survived.  Or in other words, the individual survived because the community survived.  Sure there were those of us in different classes, but even the middle class people back in the day, or the elitists such as W.E.B. DuBois, Alain Locke or Booker T. Washington who laid the groundwork for other black intellectuals such as E. Franklin Frazier or C. Eric Lincoln paving the way for the Stanley Crouch’s, Cornel West’s and Michael Eric Dyson’s–all give a clarion call that’s geared toward community.

Just in the car trip back from Baton Rouge and New Orleans this past week I played for my friend two sermons.  One of which was a sermon from Otis Moss III’s “Thug Life” series that he preached back in 2007 entitled “Raising Cain” which dealt with the community raising a generation that can be diametrically opposed to one another; we enjoy raising Abel, but we are often times forced to raise Cain as well.  Preaching from the Genesis 4 passage, he issues a charge to the community to take on the challenge to raise Cain and in the process, Abel will be raised and nurtured as well.  My friend turned to me and said, “I liked the message, but it just didn’t do it for me.  I guess I’m still used to the whole…ya know…Pentecostal thing.”

So, I popped in another CD from a Men’s Week Revival preached by Rudolph McKissick from October 2007 entitled “I’m Sick of Living Like a Lunatic” from Matthew 17 where the disciples had been asked to heal the man’s son, and Jesus summarily casted out a demon.  Before McKissick reached his first point my friend was already “in the gate” so to speak, talking back to the radio as if he were sitting there in church live.  I was driving rolling my eyes saying to myself, “Dude, are you serious?”

Now granted I am much more a fan of the preaching style of McKissick–it’s much more charismatic, and he’s going to give you a guaranteed close on “won’t He, won’t He, won’t He,” the message was geared to the individual.  There wasn’t one God-claim that was how the individual help that he proscribed was relative to the community.  Okay, sure the points he made were valid, and for the most part (**rolls eyes VERY hard**) they were found relative to the scriptural text, but NONE of them provided the individual with tools to live in better community with one another.  Just because one gets their own situation under control does not make them any better acclimated to operating in society.

Community also holds one another accountable.  In my own humble opinion, not until we, humanity, not just blacks, learn that we’re all cut from the same tye-dyed fabric operating in the imago Dei of the Divine Creator, all finding our purpose in life, I’m not convinced that we’ll ever right this listing ship of humanity.  By in large the storm that humankind finds itself in is a man made disaster.  We have created our own weapons of mass destruction in the form of hatred, xenophobia and anti-intellectualism resulting in a near doomsday scenario leading to a nuclear holocaust of high emotions that might ultimately cost us our lives one day.

So, to my readers, take agency into your own hands and do what doesn’t seem natural.  Whereas pop-culture informs our thinking and society may tell us “I got mine, now you get yours” fight that urge and do what’s right.

Now that you have purified yourselves by obeying the truth so that you have sincere love for your sisters and brothers, love one another deeply, from the heart.