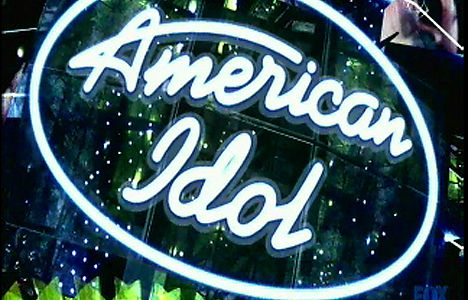 A cat jumping off the Empire State Building.  It’s official, I’m not a friend of Kara right about now.  She has totally thrown it off.

But, she sounded a hawwwwt mess.

A cat sitting under a rocking chair.

What, why did her family and friends act like she could really sing.  Wth?!?!?!  Only a 4 on the WTF scale.

Oh wow, they totally threw her off her stride….Nice voice, hopefully she’ll go through.

She’ll make it through to the semis with a voice like that.  Why does she look like a Cher knockoff?  Or is it just me.

I swear–if they show the black folk acting up, I’m going to have some problems.

Did they really have to show this infomercial of David Cook?!!??!

It’s not Kansas, it’s Missouri, but I guess.

3. Casey Carlson.  That dress…frock…curtain material that she busted out was NOT what was happening.

But, she’ll prolly go through.  I mean, she didn’t give a performance.  A package–meh, I guess.  Moving right along.

And see, I wonder how did he get passed the audition people earlier.  YES–thank youuuuuuuu! Move ON!!

Then he tried the Josh Groban.  Oh wow, Randy tried a “baby” as opposed to a “dawg.”  How was this guy supposed to be an applied voice major.  Wow, he said he wasn’t gonna cry on camera.

Woooooow, she got the “RIICCKYYYYYYYYYYYYYY!” from Boyz N’ Da Hood cry going on.

Let’s just say good bye.  That was the easy way to get rid of him.  Looked like he had on a supersized knockoff Ed Hardy shirt.

Who let’s these people in looking and sounding like this

a.  why the black folks gotta sing gospel?!!??!!?  b.  Why when he sang “was blind, but now I see” they zoomed into his coke bottle glasses.

That was the weirdest start I’ve ever heard on American Idol.  He sure gave off the vibe that he couldn’t sing.

WOW!  He has a BIG voice.  You could hear just how he filled up the room.

He doesn’t know his age like that numbnut from last night who was 22 and from Phoenix.

Did I miss something…

Says the one wearing pink hair.  This will definitely prove to be interesting to say the least.  20 days before the audition–oh wow, we’ll see.

I’m impressed…I’m not feeling the pink hair.  But um, I don’t know how far he’s gonna go though.  Yeah, I’m with Simon.  It’s goodish, it’s lacking something though.

Kara is the biggest flirt EVER.  That’s why she busted off when homegirl in the bikini shut it DOWN with Simon and Randy.  Now when it happens to them, the men don’t say nothing.

TELL THE NEW JUDGE TO FALL BACK!!!!

12.  Matt.  (ApPEALling!  I swear Fox and Ryan are sooooo cornbread with these jokes.  Am I the only one who gets ’em?)

Hmmm….the bar scene.  Wonder what his voice is going to sound like.  What–“I get that.”  Simon is kinda rude on that one.

Randy gets a 7 on the WTF scale.

Why haven’t they stopped her yet….?!?!?!?!  Where was the patented hand raise either Simon or Paula gave her.  WOW.  “She won’t see the oteher side of her rainbow.”

Grandma’s crazy pills.  She’s deaf too.  Give her that lil ear plug that amplifies crap–the Loud and Clear!!!

I really liked that opening.  I don’t think I woulda picked this song for her though.  She pulled it, but I still woulda liked to hear another song from her.

That’s like bringing a knife to a gun fight.  This is a singing competition and they gon’ rap—ABOUT COOKIES and CHEESEBURGERS!?!?!?!?!?!?

**Crawls under the bed**

She shoulda told her sister that she couldn’t sing.  WTF?!?!?!?!  Only one is going to Holly-weird.  Personally I wasn’t impressed.  I mean, they voted for her, but Randy didn’t want to vote for Matt.  A mess!

And they brought the whole family.

Look at Aun-T and MAdea

**throws up hands and moves on**

CUT OFF the mohawk!!!

why do they make melodramas out of all of this.  And then if they can’t sing and just BOOOOOOMB you feel guilty about laughing.  Sooooo, this dude better pull on EVERY emotion to pull this out.  I mean, they have video footage–

Well, at least he can sing.  He’s a music teacher, he shoulda been able to pull on something.  But that song had NOTHING to do with his wife dying.

Secondly, he’s the fewl who—-

Ummmmm…..he got those vocals from studying barbecue.

Anywho, as he goes through, he gon be the one who’s an expert about Southern blacks and we don’t know ish about us.

Lawwwwwwwwwwd….just deliver me.  Swimming in jello.

23 through like (pick a random number) 34. Thankfully we passed on all them.

I REFUSE to comment on the cheerleaders.  ‘Nuff Said.

Why are we encouraging gimmicks?!?!?  Not one single gimmick has made it past the judges.

Thank God they left theirs.

She looks like she’s headed to a ghetto prom with a school ending in the name like [Whitney] Young or [Booker T.] Washington.

And for all that…he’s a HAWT MESS!!

Well, iono bout HAWT, but I wouldn’t let him in.

Baby, there are OTHER ways to the top.

OH WOW!!! his daughter is ADORABLE with the dimples

Um….I wouldn’t have picked this song for him.  He has stage presence though.  He’s gonna go through though.

Was that Alpha hands, but I heard dog calls which are clearly Que’s….

Anywho, my phone just lit up with three female friends telling me Asa is “kah-yute” and one wants to me a step mom. HAHAHAHAHA!!!  This is funny.  My one friend said “she felt a spark.”

I’ve been through Grand Island, Neb.  His hair is the color of the corn that’s out there.  If don’t get out now, he’s not gon make it.

Simon know this fool can’t sing….he was trying to not put off the inevitable.

Can we hear the next one about the grandmother!?!??!  Why are they playing with this boy’s emotions??!?!?!  Like he sounds okay.  It’s a bit gloomy–a hawt mess.

He sound like some Alabama rekect who made it to the big leagues.

Of course, he’d be from my homestate.  Glen Carbon–never heard of it.  The way he talking it’s GOT to be from somewhere near St. Louis.

Okay, I’ve heard some crap today—they need to send him through.  I liked his voice personally.  Maybe because he’s actually singing some songs I like and had heard before.

Anywho…um, he wasn’t bad.  But, honestly, I’m not convinced he’s gonna make it very far though.

Yay, 10 minutes to count down.

She looks a hot mess.

They told her to stop because they knew that high note was NOT gon’ work.

Sweet–right, wait till later.  The easiest song in the world would NOT work for her.

She COGIC or something.  She keep on getting God for them.

She needs to go ‘head and sing backup for T-Baby in It’s So Cold in the D.

She got straight up church vocals.  She probably sings alto in the choir or she could give me praise and worship leader.

Going through to the next round.  That lil’ (no pun intended) run at the end was the business!!

I just wasted two hours of my life that I can’t get back on completely frivolous entertainment.  I’m out y’all.