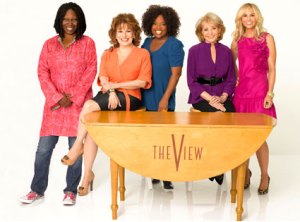 I was watching The View this morning really just to see what their reaction was to them being lampooned on Saturday Night Live.  The phone rang so I missed a part of that skit, but I thought Kenan Thompson’s playing Whoopi Goldberg was funny.  I noticed, as did Whoopi that Sherri Shepherd wasn’t on the skit, probably because they ran out of black folks.  They haven’t had a black woman since Maya Rudolph quit during the writers strike this past winter.

I would post the video of the skit, WordPress is a goof more or less allowing me to only post videos from YouTube and Google Videos.

And then they had Satan’s favorite nephew, George Stephanopoulos on the show today and they were talking about Sen. John McCain’s appearance on the show and just how does comedy appeal to voters.  But this was on the heels of an earlier hot topics discussion that stemmed from the table’s less than stellar approval of Gov. Ahhh-nold Schwartzenegger’s redress of his “girly men” comment talking about Obama’s “skinny legs.”  Barbara Walters pointed out that if this had been a woman that that would have been seen as sexist.  (Even with the bone thrown Miz Liz’s way she still couldn’t accept that that would be sexist without going on and on about the liberal media.)

Anywho, they went on to mention how comedians had lampooned Hillary Clinton’s pantsuits of many colors to no end, and how SNL and other comedians are just having a field day with Sarah Palin and her Palin-isms.  Or even pointing out the fact that McCain was a classmate of Moses.  But that Sen. Barack Obama seemingly hasn’t done anything that warranted being funny.

Check out the following clip and for our purposes, you can fast forward to minute 4:20

I really think Bill’s satire is on point though.  Everyone’s afraid to make fun of him, partly because he really hasn’t done anything lampoonable–seriously.  I mean, the guy’s been poised from day one and…yeah…if a comedian tried to do something funny it probably wouldn’t come off well.  And then, the black jokes are the funniest, but if he wins I hope the comedians will feel free, in addition to Bill, to finally make the joke about changing the doorbell to the White House as the theme song to The Jefferson’s “Moving On Up.”  Or feel free to make jokes about having Ludacris over, or mention hosting the White House as an after-party set.  Or the proverbial joke about having a barbecue on the South Lawn.

I personally think they’re all funny.

As Big Man over at Raving Black Lunatic said, a lot of times it has to do with the messenger.  A black person of equal lived experience has a tacit understanding with their audience when saying the word “nigger” and its many derivations.  Just ask Michael Richards.  Be that as it may, and just how much that irks some white folk that their white privilege doesn’t extend to the boundaries of “nigger” (and I pose the question like many others–why do some white folks care that black folks can say it and they can’t?  Why do they want to be able to say it in the first place?) I say go for Obama and make the jokes.  As Maher said, we should able to laugh at our presidents.

By the way, who’s going to play Lady Michelle Obama on SNL if they win tonight.

What do you think?  Do you think comedians should be able to make fun of Obama and put race out there or should they just keep it as it is and not make it a racial thing?