To be honest, I never heard of the Black Blogosphere until the Jena 6 crap in September 2007 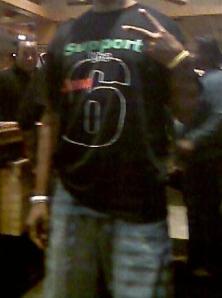 The following month, my friend from Soul Jonz told me about it, and it’s been a wrap ever since then.  But, I’ve got to be honest with you–this is some hard work.  I don’t exactly have the world’s best schedule planned out for my blogging.  I mean, these two weeks I was home in Chicago on the front part of the summer and these two weeks here are about the only time I can fully dedicate myself to blogging.

Ya know, it takes me about an hour to produce a normal length post for me, which amounts to about 1,300 words–and then hunting for pictures, saving them and then reuploading them and violating about fifty different copyright laws on my slow-butt computer takes the time.  During these days off when I don’t have school or work to worry about, I can easily produce two blogs a day, three if one may be on the short side.  But just like the blog about boycotting the first day of school preceding this one was a half-evening affair broken up liberally by many breaks, including a food one.

As I continue to ramble, just because I can…

I run across new blogs quite often, and I’ve realised the more blogs I comment on, the more recognition I get but, I must admit, I do have a top three, and usually those are about the only three I post on.  They know who they are, but at the risk of alienating the others, I’m keeping my mouth shut.  To be honest, some of those on my blogroll, I’ve barely been to except the one time I put them up there–but they’re really there for you the reader.  I mean, they very well may speak more to your tastes than they do to mine.

Moreover, I just think it defeats the point of commenting when I’m one commenter out of, hmmm, let’s say more than 30.  I mean, that’s about the most comments I’m going to read, EVER.  I always encourage people to read, but just imagine reading the comments on one blog that numbered more than 30 and then turn around and do it on another blog that has 45 comments posted, and there you come.  Often times I read another blog and I want to comment, but I’m not about to read 45 comments just to make sure I don’t say something someone else already said.

There’s also the issue of me writing like three blogs in one day and then not publishing them all at once because then jokers won’t read the first one because it’s not at the top.  This post will be a case in point, it’s 1am me writing this one, but I’m prolly not going to publish it until tomorrow afternoon because I want everyone to check out the article prior to this one.  [Editor’s note:  Yeah, I originally wrote this on Friday night, and it’s now Sunday night when I’m publishing it.]

Not to mention the frustration of lack of comments.

Yes, I’m making an official plea for comments.  I ask questions afterwards to spur discussion, even if its amongs readers and I never join in, that’s fine with me.  I really feel as though what I’ve written falls a bit bankrupt simply because there’s no way of me knowing (aside from blog stats) as to whether or not what I’ve said is resonating with anyone and on what level.

I’m elated to be part of the Black Blogosphere.  I know I’m not all that famous, but I do thank the 200+ or so of you all who have made it your habit to click on someone’s link or type it into your browser to come check me out on a daily basis.  I’m glad to see that there is a decidedly progressive bunch of black people out there.  I mean, I went through undergrad, and I had really lost hope for a while, it was renewed a bit my senior year of college, but now in grad school and being an active part of the blogging community, I believe there’s still hope.

I think the role of the black blogging community is to simply provide the atmosphere in which we can discuss our topics.  The news that only gets a lower level staff reporter coverage and buried at the back of the newspaper [Wait, do we even have those anymore?] but really pertain to us, we finally have an open forum to discuss it.

Just to point out, I’ve added three new blogs to my blogroll, check ’em out and show em some love.

Oh, by the way, sorry for the lack of pics on this one, I promise I’ll have some for the next one.

If you ever have ANY questions for me, just go to the CONTACT ME! tab at the top and drop me a line.

6 thoughts on “The Role of the Black Blogosphere”