Continuing the tradition of Guest blogs, I bugged Uppity Friend to no end to do a guest blog.  She finally got her topic as we were walking from the U Street corridor to Howard’s campus back in May when she had come out here to the “urreah.”  Please read, and leave feedback, I’d love to hear from ya, and I’m sure she’d love to hear from you as well.  Also, don’t miss out on the previous post I just did, “In Honor of the ‘Quilt Sewers.'”

I couldn’t have been older than 14.

I was walking down State Street, near Jackson [in Chicago]. On any given day, this corner is littered with tourists, Garrett Popcorn fanatics, drunks, the homeless, and those just trying to get from one part of their day to the next.  That was me, trying to get somewhere, to dance class specifically, and not suspecting that would be a problem. (Silly girl!) As I neared the intersection, I noticed a group of young men standing outside of the Walgreens. As I crossed them, the tallest of the bunch held his arm out so that as I walked by, his hand slid across the length of my chest.  He muttered something to me that perhaps he thought was a compliment. I thought otherwise.

I was immediately filled with anger, disgust, shame and more than a little fear.  I turned around to yell something at the boy (to this day I don’t know what I would’ve said), and just as I formed my lips to speak, he hurled “Bitch!” at me.  I don’t know if I’d ever been called a bitch before that moment, but the socked-in-the-gut feeling that almost made me double over was a good indicator that I hadn’t. I turned and kept walking towards the dance studio, crushed and very, very confused.

Sometimes I wonder why a passerby didn’t try to claim their Good Samaritan Award by coming to my rescue.  Even more frequently, I wonder why the whole thing happened in the first place, why being female and black often makes one a target for physical, mental and emotional violence. But those are topics for another day.  This isn’t a blog about the way women are simultaneously assaulted and ignored at every junction of their lives. Or maybe it is….Anyway, the State and 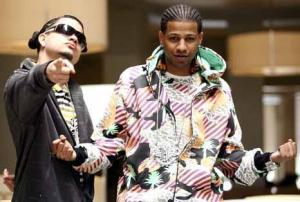 Jackson incident was my formal introduction to the League of Crazy Muthafu**as In Da Street*.  Everyone has their individual orientation, and for women, it can be the most brutal of ceremonies.  But once you’re in, every stroll down the block is some version of that First One, sometimes less painful, sometimes more, but few are as poignant as the one that introduced you to the League in the first place.

I wouldn’t say that I’ve been called everything but a child of God, but I have been called “Trick”, “Bitch, “Ho” and “I-wasn’t-talkin’-to-you-no way-then”, when it became obvious that I had no intention of responding to the initial invitation for conversation.  I’d like to believe that it will stop happening, that one day, I’ll walk down the street and men will greet me by saying “hello”, smiling, and tipping their hats as they pass.  (Don’t front, you know you want fedoras to come back, too. Outside of music videos.) But that is not the case. It seems, no matter the age (ours or theirs), the time (early in the AM, even on Sundays), or the place (even in the church parking lot!), some men are inclined to call out, even yell generic names and/or obscenities, to get the attention of a passing lady.

The older I get, the more my girlfriends and I commiserate, we realize that we are called by many names on a daily basis.  Some we cherish as terms of endearment, while some make us want to cringe, cry, or hurt the person (usually a male person) who uttered them.  I consider myself fortunate (and it’s a misfortune that this makes me fortunate) to have men in my life who call me by my given name, and who use nicknames that praise my being and respect my person.  I am called by names that, I believe, speak to the heart of who I am.  I hope you are as well.

But when interacting with the League, ain’t no one exempt.   You may be betrothed (and wearing the ring on you finger), you may be unkempt (wearing sweats while making a grocery store run) or you may just be minding your own damn business. But if a member of the LCMS wants to accost you, he will do so.  Rest assured.  I polled some of my closest confidantes, black women like myself, to find out what names they’re called when they’re out an about, in the League’s territory. The ladies I asked hail from different parts of the U.S., but there seemed to be some names that popped up no matter what part of these United States they came from.  Shorty was a popular one, as was Ma (and its derivatives), but what struck me was the frequent occurrence of “Ay yo!” and “Hey girl!” (I’ve always wondered how women are supposed to respond to generic calls like that…Seriously, which “girl” are you talking to?!).

The majority of the time, my friends don’t respond to this type of approach.   Neither do I, for all of the obvious and not so obvious reasons. Here are some:

a)      We (and/or the League member doing the accosting) are entirely too old to be engaging in this type of juvenile behavior. Why are you yelling in the street, young (or middle- aged, or old) man?!

b)      We choose not to engage in public acts of indecency with persons unknown to us (i.e. a conversation with a whack individual).  See item (a)

c)      If one has nothing better to do than stand on the street and accost women making their way to one place or another, chances are a conversation with said person would be neither interesting nor fruitful. See (a) and (b) above.

d)      We know where this is going.  If we do speak, we’ve given the other party reason to believe that we want to engage in conversation with them, thus prompting them to spew more ignorance.  If we don’t speak, we run the risk of being called something horrible, or being otherwise harassed. The odds are never in our favor.

Long story short, most women do not want to be accosted, harassed, or just plain yelled at.  Not because we don’t appreciate a direct, straight-forward man, not because we don’t know how to accept a compliment (aside: this behavior is NOT complimentary!), but because history is on our side. We know the conversation that follows the initial call of “Hey girl, lemme holla atchu..” isn’t going to be followed by pleasantries.  It’s gonna be whack game. How do we know this? Once, when we were young and naïve (and 13), we answered a similar call, and were sorely disappointed.  Some of us learned from the first mistake, and vowed never to interact with members of the League of Crazy Muthaf**kas in Da Street ever again.  Some of us learned the hard way, after the second incident, that this was not the path we wanted to walk. We want to be addressed in a way that doesn’t embarrass or demean us, that doesn’t make us feel less than human.  Respect, please.  Trust, if you see us in the street, find a way to approach us that doesn’t reek of uncouthness.  Cuz if it does, you run the risk of giving us a flashback to our first run-in with the League, and we don’t want that. Neither do you.

*Thanks to poet Liza Jessie Peterson. The idea for the League of Crazy MuthaFu**as in Da Street came from a poem of hers.

Hope you enjoyed it.

9 thoughts on “UNN Guest Blog: Why We Only Speak To Men We Meet Indoors”