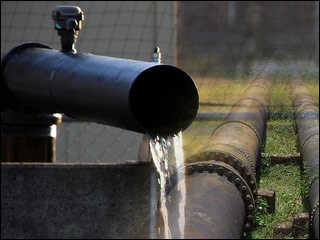 Is this racist or not?

I have cousins that live in rural areas and I remember for the longest that they didn’t have city water, but had dug their own wells.  Here’s the July 11th story CNN story below:

Residents of a mostly black neighborhood in rural Ohio were awarded nearly $11 million Thursday by a federal jury that found local authorities denied them public water service for decades out of racial discrimination.

Each of the 67 plaintiffs was awarded $15,000 to $300,000, depending on how long they had lived in the Coal Run neighborhood, about 5 miles east of Zanesville in Muskingum County in east-central Ohio.

The money covers both monetary losses and the residents’ pain and suffering between 1956, when water lines were first laid in the area, and 2003, when Coal Run got public water.

The lawsuit was filed in 2003 after the Ohio Civil Rights Commission concluded the residents were victims of discrimination. The city, county and East Muskingum Water Authority all denied it and noted that many residents in the lightly populated county don’t have public water.

Coal Run residents either paid to have wells dug, hauled water for cisterns or collected rain water so they could drink, cook and bathe.

“As a child, I thought it was normal because everyone done it in my neighborhood,” said one of the plaintiffs, Cynthia Hale Hairston, 47. “But I realized as an adult it was wrong.”

Colfax described the verdict as unique among civil rights cases nationally, both in the nature of the ruling and the size of the award.

The jury in U.S. District Court found that failing to provide water service to the residents violated state and federal civil rights laws. The lawsuit was not a class-action. Colfax said 25 to 30 families live in Coal Run now.

Zanesville attorney Michael Valentine said in court that he intended to appeal but declined to comment further. The county commission also plans to appeal.

Attorney Mark Landes, who represented the county and water district, called the verdict disappointing. He said jurors were not allowed to hear defendants’ testimony that neighborhood residents were offered water service years ago and refused it.

Colfax said he was unaware of any evidence that was excluded from the trial.

“This was a case that was started and fired by out-of-town lawyers who saw an opportunity for a cash settlement,” Landes said.

The plaintiffs’ attorneys will receive a separate amount to be decided later by a judge, Colfax said.

John Relman, a civil rights attorney based in Washington, D.C., who represented the residents, said the jury heard hours of testimony and saw hundreds of pages of documentation over the seven-week trial.

“This verdict vindicates that this (treatment) was because of their race,” he said. “The jury agreed with that and issued a verdict based on a full airing of the facts.”

“This decision speaks firmly about the importance of treating citizens with equal respect, regardless of race,” she said in a statement.

Plaintiff Frederick Martin said the long wait was worth it.

He and his nine siblings shared two tubs of water between them on bath nights when he was growing up. He left Coal Run, built on a former coal mine, in 1970 so his children wouldn’t have to endure the same living conditions, he said.

“Today I feel that we are really blessed, to know and to see justice being met,” Martin said. “And to see, regardless of who we are, there is a price to pay if you discriminate against people.”

The plaintiffs’ attorneys successfully argued that the decision not to pipe water to the plaintiffs was racially motivated, painting a picture of a community with a history of segregation. Black residents of Coal Run Road were denied water over the years while nearby white neighbors were provided it, they said.

Landes countered that about half of Muskingum County residents are not tied into the public water system even today. Among those without it are county commissioners, judges and other prominent officials, he said.

Zanesville has about 25,000 residents on the edge of the state’s Appalachian region. One in every five families is below the federal poverty level, and the unemployment rate in Muskingum County in May was 7.4 percent. The national unemployment rate that month was 5.5 percent.

Perhaps it’s just a period in my life, maybe it’s a summer thing because I’m around all white people, but I’m a lot more suspicious of things like this than perhaps I would have been at the beginning of the summer.  I would have chalked it up to the reasoning of just living in rural, small town America, and not a racial thing.  But, given the story about the sheriff’s department in a Texas county calling for the removal of a dismembered, unclaimed body of a white woman from the black funeral home, well, I guess you can’t put it past small town USA.

Do you think this is racism or prejudiced or a combination of both at its finest?  Or is it simply this black community being the victim of circumstances?