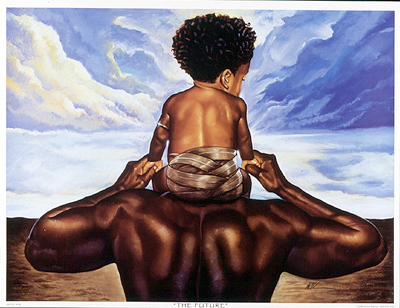 On Saturday, June 14th, the day before Father’s Day 2008 I received word from Papa Uppity himself that he had what the doctors had termed a heart attack.

Yeah, that was a blow.

I’m an only child and as I’ve gotten older and started to deal with my friends’ parents mortality, but even more so, I’ve been forced to deal with my own reality: I’m going to be alone one day.  The nuclear family that I have known for these 23 some odd years will one day be no more.

It was an interesting day on Saturday because it was the day after our kick-off celebration at my internship on Friday which went pretty well, and then Saturday was a laxed day and I decided to go get my haircut finally because the intersection of time off and money finally met and I sat in a new barber chair, unfamiliar to the Atlanta and Chicago scene that I had grown accustomed too and most everytime I go to the barber, I think of my dad.

I never went to a barber until I was 14, it was March of 1999, because my dad always cut my hair.  Now, these weren’t always the most pleasant of experiences however.  As a kid, me and my father always bumped heads as to what kind of haircut I wanted.  Naturally, I wanted to keep up with the styles and my dad could have cared less.  I look back at my pictures as a kid and I realise that my dad certainly wasn’t worried about style.

I remember back in 6th grade that I wanted to finally get rid of my high top fade–aka The Box–and my dad didn’t want to cut it off because “It’d look bad in the graduation photos” to which my mother quickly echoed that sentiment.  So while my classmates had fresh cuts, I was still sitting with The Box.  I also remember that when I went to my new school for 7th and 8th grade that the other boys finally started asking “Why yo’ lining so f%$#@& up?”  and that it was quite a struggle with my father to get him to edge up my hair.  He said I was too young and it would make my skin too sensitive and that when he was a boy his father didn’t give him a lining.

I couldn’t have cared less what he did as a boy.

My dad resumed cutting my hair and then my junior year I grew my hair back out to which he got a break for about a year, and I wanted to cut my hair off again around January of 2002 my senior year, to which he said “No.”  I guess he didn’t want to be Delilah to my Samson; not calling him a woman, but I guess he believed it was some “power” in my hair and he didn’t want to be instrumental to it.

Yeah, whatever the case maybe, that Saturday, prior to me knowing what the situaiton was with my father, I realized that that was one of my sacred precious memories of my father.  Most certainly now I am going to cherish them even more.

I don’t have any pics of my father to post, nor any of us together here on my computer out here, but I guess that’s okay.  This post was more of the personal kind seeing as how my father’s doing just fine in a hospital for observation.  I talked to him earlier today and he sounded just fine like I was talking to him on a normal Sunday afternoon as he and my mother prepared to go to church, but this year was different.

So, to Dad, if you’re reading this, know that I love you and that I do care about you, and I will do my best to honor you for the rest of my life.

One thought on “To my only Dad”