Skip to content
Posted on June 5, 2008 by the uppity negro

THIS is a blog I’d rather not feel moved to write. I’ve already set a task before me of a list of blogs that I was supposed to be writing exploring some of the issues surrounding the recent Democratic campaign events.  Pushing those issues further make making them less and less relevant.

BUT, the fact that Cardinal George of the Chicago Archdiocese decided to suspend [yeah, ask Hillary Clinton for this definition of “suspend” and what it really means, talkin’ bout “suspending” campaign, wtf?!?!?!]  Father Michael Pfleger from the pastorate of the Faith Community of Sabina Roman Catholic Church.  Well, despite my own reservations about Roman Catholicism, I liked Fr. Pfleger.  His glowing bio on Wikipedia speaks volumes about his character as a pastor. His faith had moved him to actually do community activist things that actually lead to a physical and tangible betterment of the surrounding Auburn-Gresham community on the South Side of Chicago.

This was a guy who just hosted the birthday party of Maya Angelou, who’s friends with Oprah, who also endorsed Barack Obama, soooooo are we going to now go after Maya Angelou and Oprah en masse and call for their removal, or is it suspension, I’m getting the two confused.  Just look at the picture below with him flanked with the King’s, but folks want him removed. 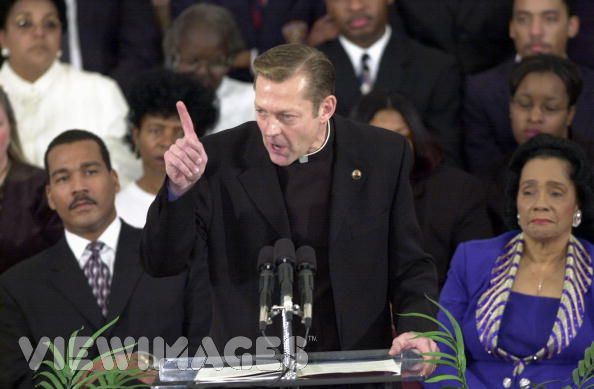 I’d REALLY be interested to see what folks would think of a Martin Luther King if he had given his 1967 Riverside Church sermon in 2008.

I mean Fr. Pfleger is a bad dude!

Now, let me first say I don’t like Cardinal George, never have.  I felt he was mealy mouthed and didn’t have a spine to save his life.  Chicago hasn’t had a decent Cardinal since Fr. Bernadin passed in 1998 from cancer.  By extension of my parents, I don’t like Cardinal Cody who I believe preceeded Cardinal Bernadin.  But Fr. Cody had threatened to remove Fr. Pfleger in 1981 when Pfleger decided to adopt a black male child.  So, for Cardinal George to remove Pfleger over this, but shuffled his feet on removing pedophiles from their pastorates…

Granted, I coulda seen this removal coming a MILE away, and yes I’m sure Stevie Wonder could have as well, but honestly, the South Side of Chicago had definitely been lulled into a stupor that Fr. Pfleger was an untouchable, because even I believed the hyped.  I mean, from a white guy with blue eyes who frequently preaches in Kente cloth, in front of a picture of black Jesus and chain smokes–I mean, he was a black church pastor, the church was his lock, stock and barrel!

Maybe he should just pull a Fr. George Stallings with Imani Temple and leave the Roman Catholic church, it’s not like they have a great track record historically with African Americans contrary to popular opinion.

I just think it’s really messed up that Cardinal George even removed Pfleger from the rectory.  Granted he’s not living on the streets, but he’s definitely not home; somewhere he’s been living for quite a few years now.

So, yes, this note is really another spiel solidifying this idea of social justice in the pulpit because yet again, Pfleger’s nearly 30 year ministry DEFINITELY far outweighs this ONE stupid comment about Hillary (which appears to be a sentiment if not shared by Hillary herself but by many of her supporters) and I’m ready to debate until the death that Pfleger made a true slip of the tongue when he said that “America is a…sin against God,” albeit a Freudian slip probably.

[I was unable to embed the above link, but this link provides context for Father Pflegers sermon in which he mocked Hillary Clinton]

This is a bellwether moment for me, especially as someone planning to go into the ministry and I wonder are we going back to the days where black churches were watched by the white powers that be lest they said something that challeged the status quo.  Honestly, I consider this Trinity-watch nothing shy of the practices of local authorities in the era between the Civil War and the modern Civil Rights movement.  If someone fails to preach what falls into certain perameters, apparently as determined by whatever random, person, usually white, political pundit who’s never attended a black church on the regular to get a good feel for the ethos of the church.

So, it seems to me that Cardinal George was willing to save face rather than step out on faith that Pfleger was on to something with his radical judgments of the state of race relations in this country.   Especially juxtaposed to denominational presidents coming out to speak on and defend more or less the establishment of Trinity United Church of Christ and their association with Jeremiah Wright.  Is the church about saving face or about stepping out on faith that the direction they are headed is the direction where God is.  I guess its the age old debate about religion and politics mixing together (guess you could add race into the mix whenever applicable).

I mean, people compromise their faith just to save face all the time.  This is not even remotely a new tactic that Cardinal George is using.  It’s called opportunity costs: are you willing to give up something in order to get something.

My question simply posed to the blogosphere is saving face worth more than your faith?  At what point are you willing to compromise?

5 thoughts on “Saving Face over Faith; Pfleger removed from his pastorate”