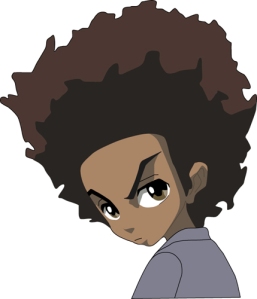 Well, this is a first.

This is actually a post to address the concerns of one of the comments posted from my other post When White is right, even for Morehouse College.  This comment brought up the issue as to whether or not a black student could be valedictorian at a traditionally white institution (TWI) similarly the way Joshua Packwood 08′ of Morehouse was named valedictorian of an historically black college or university (HBCU).  We agreed that the issue had nothing to do with innate ability, but we appear to differ on this idea of professors being fair enough to look past race as a deciding factor towards grading.

The following is one of the primary reasons why I think race still plays a major factor.

I was in the double honors program at my high school with a track system beginning with regular, honors, double honors and International Baccalaureate (IB) program, the only fully accredited one in the city at the time.  Suffice it to say, the closer you got to the IB track the whiter it got, but that’s another post for another day.  And in my World History class, 1st period, I had a double honors class.  Now, granted I was a first rate asshole at times in that class, I still fail to see, in high school, how that should affect the teachers ability to grade fairly.  I wasn’t going off cursing out the teachers calling her all kinds of names, but I just had a smart mouth, I wasn’t one to accept rude comments toward me without having some smart-ass remark.

Now, I just threw out the majority of my work 2nd grade through 12th over this past Christmas break, but I made sure to keep three of her papers that she graded.  In these papers, she was QUITE biased against what I wrote.  Case in point.  We had one paper that was supposed to be about the Black Death in Europe, and I wrote that at the time some of the people and powers-that-be thought the Plague came from witches and I used the word “necromancing” to which she circled and wrote in the margins that I didn’t know what it meant.

The other paper was a book review on this book entitled Soldiers In Hiding and it was written by a American who was mixed with Japanese heritage and grew up in LA, but he wrote the book heavily from a Japanese perspective.  Per the syllabus she allowed us to write our own opinions of the book, now granted this was an assigned book, and I said I felt that perhaps he wasn’t all the way culturally equipped to write from a Japanese perspective, much like many felt (I still feel) that William Styron was wholly unequipped to write The Confessions of Nat Turner and enter a NOVEL into the historical record.  So, she circled that last paragraph and wrote “I disagree” and my grade that was once a B was visibily scratched out and given a C+.

Aside from the numerous run-ins that me and her had and her sending me to the disciplinarians office, and leaning on my legs leaning over (and she had the worlds biggest chest) and saying “You’re so well read…” much like Sen. Joe Biden’s misspeak about Sen. Barack Obama saying “I mean, you got the first mainstream African-American who is articulate and bright and clean and a nice-looking guy … I mean, that’s a storybook, man” which is interpreted as being damned by faint praise in the African American community and ultimately is received as an insult.

Now, I went to an HBCU for undergrad, and I’m at an HBCU for my dual masters degrees, honestly, if Howard Divinity School had a Ph.D. program in my field, I would go there as well, but they don’t, so I will of course be going to a TWI.  Even for the white professors that I had at the HBCU’s I never have entered their classroom with the idea that their going to single me out–but of course, that was because I wasn’t in the minority.

But, given the rest of high school where I was in the minority with a white teacher, I can’t think of any other teachers that I felt had negative attitudes towards the non-white students.  In fact, she’s the only one.  I mean, it was so obvious with this woman.  Let’s be realistic, she was a mess toward all things non-European.  She allotted like 6 weeks to the study of Europe and Asia and then 4 weeks to South America and 3 weeks to Africa, two of which were to be independent study over a 2 week Christmas break.  And this was a fool who decided to tell the class that indentured servitude wasn’t as bad as chattlel slavery was in these United States.

I stood up and promptly told her she was wrong–that earned me one of many detentions.

This is what I call institutional racism.

My world history teacher, granted liberal enough in her speech, especially being a proud and adamant follower of the Jewish faith, still operated off of her embedded beliefs that somehow non-white kids, unless “docile and manageable” were not worthy of what she had to offer.  Perhaps, it is something only noted because of lived experiences.  But let us remember that perception is in fact reality and far be it for someone else to deny another’s lived reality.  The facts would say that she was merely a hard teacher, but reality would dictate that she had some underlying racial issues that she needed to deal with.

This is what black students face when they attend TWIs coupled with the pressure of just pleasing the professors and not getting on their bad side in general (a rule learned at colleges across the board).  At least at HBCUs that pressure is relieved.  Also, for many, its the first time that one sees people of their skin color in the majority, especially for people like me who went to a mixed high school and had teachers of all races.  Not saying that was a bad thing, I wouldn’t trade those cultural exchanges for anything in the world.  But, perhaps it’s something some white people can’t appreciate, because it’s NORMAL to see people like themselves in power, so for people like me an HBCU is a wonderful thing

Also, let it be known that institutional racism far surpasses that of college classrooms but is evident in the corporate world for just the same reasons as in the classroom.  The supervisor always finds some kind of way to make sure that the work is judged with a bias, but then that of the white counterpart is somehow judged better.  Or even, as far as entrance into colleges or the corporate world.  There have already been studies that have shown that some, not all, businesses are less inclined to hire a “Shaniqua” over that of a “Mary” per se, even though the two have equal resumes.  Quite frankly, I’m convinced that I’ve had some doors opened for me that perhaps wouldn’t have been just because of my name–many think I’m Jewish.

Actually, this Al Sharpton clip at Rosa Park’s funeral and his bit about James Crow, Jr. Esq. seems to hit the nail on the head.

For me, this is my reality.

I was watching laaaaaaate one night, not paying much attention, had to have been CNBC, a station I usually don’t watch and they were interviewing the CEO of Starbucks and he said that “the difference between success and failure is the gray area of perserverance.”

I’m in the gray area right now, and I wish the rest of America (ALL of us) would join me (and there are many others, I know I’m not  lone voice crying out in the wilderness) to have an intellectual debate about race, religion and politics and not be totally anti-everything else that doesn’t look like me.  I would LOVE to see the day where MLK’s dream comes to fruition, but sadly, I think we’re still at the point in his speech where he said

In a sense we’ve come to our nation’s capital to cash a check. When the architects of our republic wrote the magnificent words of the Constitution and the Declaration of Independence, they were signing a promissory note to which every American was to fall heir. This note was a promise that all men, yes, black men as well as white men, would be guaranteed the “unalienable Rights” of “Life, Liberty and the pursuit of Happiness.” It is obvious today that America has defaulted on this promissory note, insofar as her citizens of color are concerned. Instead of honoring this sacred obligation, America has given the Negro people a bad check, a check which has come back marked “insufficient funds.”

(P.S.  For inquiring minds, the reason I chose Huey for the picture is because I feel that Huey’s character represents looking at our race issues with a critical mind above that of many of the older heads in this country.  It is only with our ability to remove one’s self from one’s own view point and look at it from another vantage point that we will no longer, as Paul said “see through a glass dimly.”